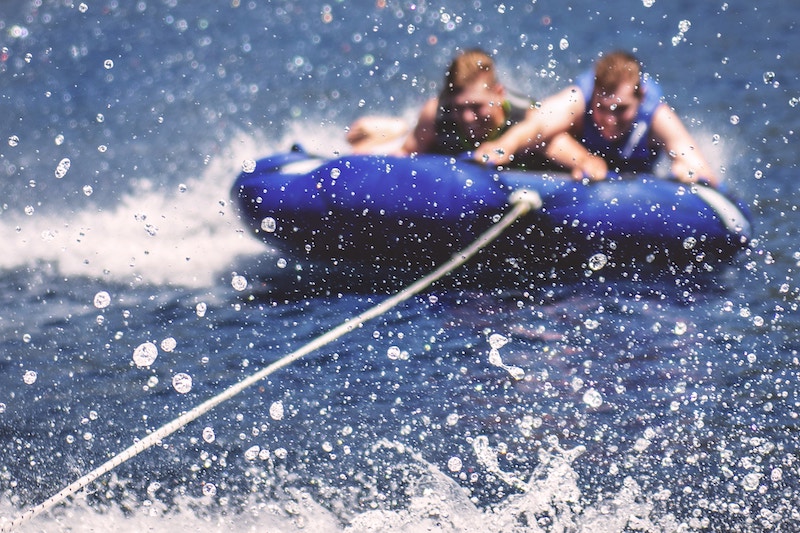 Mark a large square in the field and place a stack of seven to ten inner tubes in the center of the square. Divide the group into four equal teams, each one lining up on their side of the square. Number the players on each team from one to however many players are on each team.

The object of the game is to get as many inner tubes as possible across your team’s line. Call out several numbers. The players with those numbers run to the center and start dragging the inner tubes to their lines. There may be several players tugging on the same tube. Each tube successfully pulled across a team’s line is a score (one point) for that team.

Once the kids get the hang of it, add a soccer ball to the game. Each team gets a point deducted from their score if the ball is kicked over their line. Team members along the team line act as goalies. Once the ball touches the ground in their territory the point is scored against them.

To further complicate the game, add a cage ball, or earth ball (four to eight feet in diameter). The team that gets this ball across their own line gets three additional points.

CRISS, CROSS, CRASH
Good name for this game. Be very careful- if you don’t use good safety precautions this could result in injuries. Divide your crowd into two teams, each team in two groups for a relay. Line the teams up in four corners of the playing field, each team diagonal with its partner team. Give each group 2 or 3 tubes (depending on size). The first team members must step into the tubes, pick them up (so they look like a Michelin Man) and run diagonally to their partner team. Of course, their partner team and two opposing teams are running through the same intersection so look out! The first team to switch all players across the diagonal one at a time is the winner.

JUMP THROUGH
This is a simple relay where you give each team one tube and they race to see who can get their entire team through their tube first.

MICHELIN MAN BUMPER TUBE
This is basically Sumo Wrestling for poor people. Two players battle each other, each holding a tube like a belt or a belly. Draw or rope off a small circle that they try to bump each other out of.

TUBAL TUG
Get 5 innertubes (small to medium-sized ones work best). One of them serves as the middle ring. Tie 4 ropes (ropes should be 8 to 10 feet in length) to this middle tube (you have to have your tubes tied for this game!!!) Tie the other ends of the ropes to the other 4 tubes – one rope to each tube. Next, you will need 4 cones and 4 tennis balls. Lay out the inner tube contraption, putting the center ring at the center (duh…) and the other 4 stretched out to the noon, 3, 6 and 9 o’clock positions. Then place the cones with the tennis balls on top about 10 feet out from the inner tubes. Kids then get in the inner tubes and on “Go” they attempt to become the 1st person to get the tennis ball off their respective cones (thus a four-way tug-o-war). Since they are essentially pulling against 3 other people, from different directions, it’s not always the biggest/strongest that wins. Caution: Don’t do this game on cement/asphalt because someone always slips or falls down and then gets drug across the ground by the other players.

BASKETBALL GIGANTE (Giant” in Spanish)
Get 2 carpet roll tubes (12-foot cardboard tubes) you can get them from any carpet co. You also need a big cage ball (earth ball). simple you hang the tubes from the gym ceiling with some rope and the kids must get the ball through the goal (over the tube and between the ropes). We play this game in our gym with up to 175 kids.