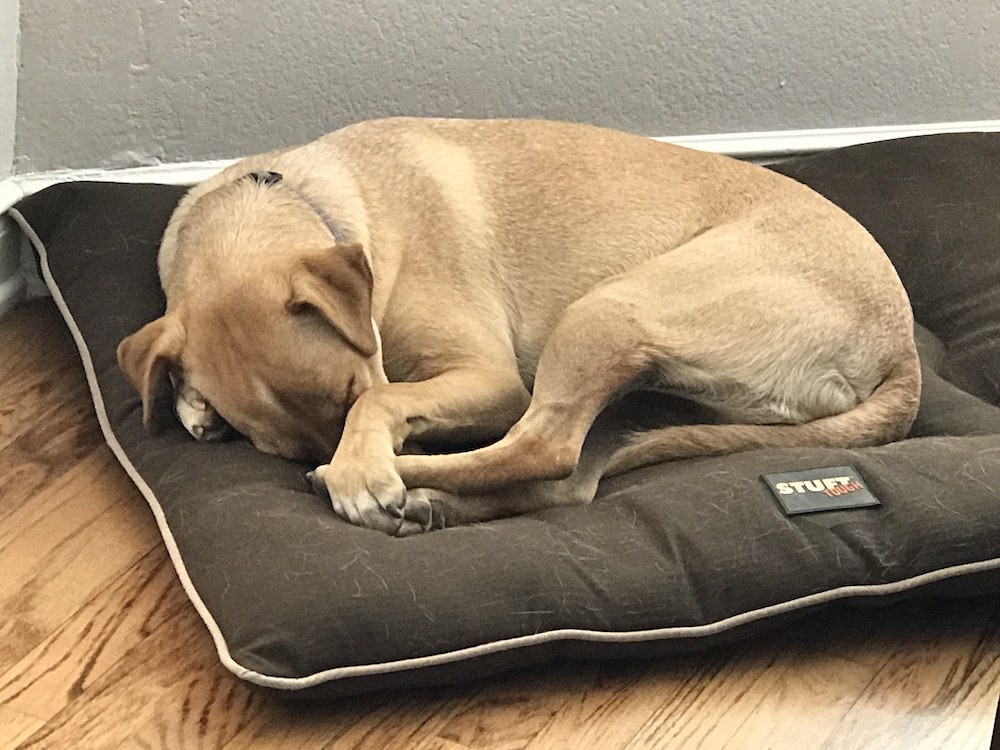 When we choose pleasure over truth
by Jonathan McKee

Last week my brand new book, Guys Guide to FOUR BATTLES Every Young Man Must Face was released, and I wanted to share an exclusive excerpt with you, my loyal readers. Here is the first chapter of this book to young guys which includes discussion questions to engage them in conversation about what they just read. Enjoy!        -Jonathan

My dog Lionel is hilarious—assuming “hilarious” is code for “prone to trouble.”

Lionel is mostly Labrador but has just enough Jack Russell terrier to keep us all on our toes. Jack Russell means all energy all the time. We always have to be on our A-game because Lionel is like a toddler who will dart out into the road to chase a shiny green ball, with no regard for the four-thousand-pound Chevy truck approaching at 50 mph.

Last summer Lionel discovered something delicious—the drip tray underneath our outdoor propane grill. Whenever we grill burgers, steak, chicken, brontosaurus. . . anything, the fat drips off the meat down through an opening in the bottom of the grill, oozing into a disposable tray that is several inches deep. This tray isn’t small by any means. It can hold almost a half gallon of drippings, and by drippings I mean fat!

One night I grilled some delicious ribs. Everyone loved them. I even gave one to Lionel. The next morning Lionel walked by the tray and caught a whiff of the previous night’s drippings. . .along with about three months’ worth of coagulated drippings. Basically a huge tray of fat!

Lionel wandered over to investigate, sniffing the edge of the tray. I kindly told him, “No, you don’t want that.”

But Lionel looked at me like, “Uh, I assure you, I definitely want that.”

I shooed him away, but over the next few days I caught him loitering by the grill a dozen times, attempting to poke his snout into the tray of fat.

Every time I stopped him and warned him, assuming he understood every word.

But each time he looked at me confused. His little canine mind was determined that this aluminum tray of goodness would bring him unending joy. So I decided to reason with him. I sat him down and said, “Lionel Richie”—I always use his full name when he’s in trouble—“you need to trust me on this one. If you eat that vat of drippings it’s going to rock your world, and I don’t mean in a good way. Your forty-seven-pound body just isn’t ready for this concentrated dose of congealed fat. Lionel, my friend, it will wreck you! Beware!”

Lionel just peered up at me like, “Can I go eat the fat now?”

The next day I was digging post holes for a fence I was building and turned to look for Lionel. The sly little rapscallion wasn’t lying by the shed chewing a deer bone anymore. He had crept away quietly.

I walked my property (I live in the country) searching for him and calling his name.

The tray of fat!

I walked to the back of the house over by my grill. Sure enough, there he was, muzzle deep in fat, indulging and ignoring my calls. I called his name one last time. He looked up at me with his glistening muzzle, paused, and literally doggy-burped.

I said, “Oh, if you only knew what else is coming.”

He had eaten every last glob.

I warned the family. “Lionel just ate three months’ worth of grill drippings.”

“How much?” my daughter asked, laughing hysterically.

“Oh, almost half a gallon of gelatinous fat.”

And then it happened. It wasn’t instantaneous. It took about an hour. But then it started coming up.

First it came out the front end. I’ve never seen so much doggy puke. Then he ran to the door. We let him out, and I won’t describe what came out of his backside. Poor Lionel was as sick as a. . .well. . .as a dog (so that’s where that phrase comes from).

He was sick for probably thirty-six hours, lying on his side, looking up at me like, “Kill me!”

This pup who normally was nonstop energy bouncing off the walls didn’t want to run, walk, play. . .anything. He wouldn’t chase his favorite green ball, and he didn’t even look at his food. He just kept lying there gazing at me lethargically like, “Why?”

And I would simply reply, “I know, right? You should have just stuck with the ribs.”

Three days later he was back to normal.

The following day I grilled some burgers, and guess who was trying to shove his muzzle in the tray of fat?

It’s like he didn’t remember the source of his misery.

The takeaway is pretty clear. Dogs don’t have the ability to reason. Dogs can’t look ahead and determine, “This won’t be worth it.”

Think about that for a minute. If humans can reason, then why do so many of us make foolish choices, despite the obvious lurking consequences?

We laugh at Lionel and think, Stupid dog, didn’t you learn? You’re going to get deathly sick and wish you had never done that!

Is there a reason we can’t take our own advice?

Is there a chance we sometimes choose “immediate pleasure” over “truth”?

Let me say it another way: Do we sometimes choose the quick and temporary thrill over what we know is best for us in the long run?

That’s really the essence of this book. The world constantly dangles “fun” in front of our faces, and if we don’t indulge, we get all FOMO—we feel the fear of missing out on something enjoyable. In this book we’re going to simply step back and look not just at the tray of fat in front of our nose; we’re going to consider tomorrow and the next day. Then we’ll ask: Is four minutes of feasting on fat worth thirty-six hours of regret?

Let’s think about this for a moment. I’ll use questions, because they are an effective tool to help us digest what we’ve just read. Better yet, share what you’ve just read with someone else you trust. Maybe it’s a close friend, a mentor, or even a parent. Read this book together, ask each other these questions, and answer honestly. I think you’ll find it refreshing to talk about these real-life issues instead of burying your thoughts and trying to figure it all out on your own.

Final Thoughts
Sometimes people think following Jesus means no fun. Jesus Himself said He came to give us a “rich and satisfying life” (John 10:10).

This book isn’t about missing out on fun; it’s about living life to the fullest and avoiding self-inflicted hurt or consequences. This book is about enjoying the ribs and skipping out on the tray of fat.

Which would you rather have?

Well, where is your focus? Let’s talk a little more about that in the next chapter, Distracted…