Season Seven, Episode Sixteen, The First Day of the Rest of Your Life 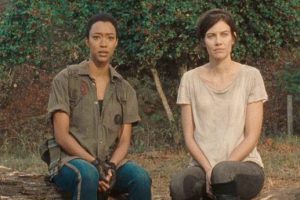 Who would you rather be, Negan or Rick?

Think about it. Negan has pretty much everything he wants, including immense power and access to most of the material things that people only enjoyed before the Zombie apocalypse. He also leads a very large community that may eventually become an established government in this new world.

What does Rick have? He doesn’t have much power and most of his material possessions have been stripped by the saviors – but he has family. Not just Carl and Judith, or even Michonne, but he has a community who cares for and loves him.

My guess is that when it really comes down to it, most of us would rather be Rick. Some might argue that Negan has a family, but my guess is that if you take the fear away, his “family” would scatter like cockroaches when the basement light gets turned on. Rick doesn’t have to worry about whether the people around him are going to try and kill him in his sleep. And he has respect and admiration from most of the people around him – not because they have to, but because he earned it.

I think that good and evil have been defined perfectly at this point in the show (if it wasn’t already when Glenn and Abraham got killed). Negan rules with fear and brutality, while Rick leads with kindness, justice and respect. That is why I think that most of us wouldn’t have to think twice about which side we would want to be on.

Tonight’s season finale of The Walking Dead was epic in the truest sense of the word. It resolved so many big questions about the fragile alliances our people had spent the whole second half of the season putting together (most of us knew Rick couldn’t trust Jadis). It was also one of those episodes that really featured almost every member of the cast, except for a few notable exceptions (where were you Gregory?). And most importantly, it helped us understand what side everyone was on. Sasha went down fighting, in one of the most unusual ways we have seen. And Eugene, we still have hope for you, but you certainly have picked the wrong side. Your future doesn’t look very good buddy!

By the end of the episode, the lines are drawn and we pretty much know what side everyone is on (except for Dwight, who may be our hidden asset next season). We are now set for war, and there really isn’t going to be as much room for sitting on the fence in season 8. War is inevitable and it looks like Shiva might get to eat a few more saviors before this whole thing is over.

But what about Sasha? That scene where she met Abraham again was so powerful. I love it when people from the past revisit the show (please let Glenn return one more time). We assumed that she was dreaming about Abraham, but at the end we realized that she was actually dying. We all knew that she had it in her, but using Eugene’s pill? Brilliant! All in one move, she took away Negan’s power over her and others who cared about her, and she saved a lot of lives.

The montage at the end was perfect, but the dialog between Rick and Maggie that served as the voice over for the scene told us almost everything that we ever loved about the show.

Rick: Do you think Sasha did that herself?

Maggie: I don’t know how, but I know she did.

Rick: She gave us a chance. You did. You made the right decision to come.

Maggie: The decision was made a long time ago, before any of us knew each other, when we were all strangers who would have just passed each other on the street before the world ended. And now we mean everything to each other. You were in trouble. You were trapped. Glenn didn’t know you, but he helped you. He put himself in danger for you. And that started it all – from Atlanta, to my daddy’s farm, to the prison, to here to this moment now not as strangers – as family because Glenn chose to be there for you that day a long time ago. That was the decision that changed everything. It started with both of you, and it just grew to all of us to sacrifice for each other to suffer and stand, to grieve, to give, to love, to live to fight for each other. Glenn made the decision, Rick. I was just following his lead.

Maggie’s speech gave us a perfect picture as to why we love Rick and his community. It also showed us why Maggie will serve as an excellent leader for this group and that she is wise beyond her years.

What she picked up on was that it was the selfless actions of her late husband Glenn that made this entire community possible. This started in Episode One of Season One. Glenn (a total stranger) saved Rick’s life when he was stuck in the tank and without that, nothing else in the show would have happened. It was that action that defined this group from the very beginning. Then as the group grew, it was almost always because of their spirit of justice, love and kindness. They discovered that this was the key to building family and why most of the audience would never root for Negan. This is probably also why record numbers of people tune in on Sunday nights to watch this show – we all desire to be part of a family. This show taps into that basic human need in a way that few other shows do.

As a Christian, I was really moved by Maggie’s final speech. I thought that it was actually a great picture of what the Christian community should look like. You know, like the Acts chapter 2 community who sell their possessions in order to care for each other. Or in Acts chapter 6, when the Apostles elect new leaders and give up some of their power in order to care for the widows who are being overlooked. But one of my favorites is in Hebrews chapter 13.

Keep on loving each other as brothers and sisters. Don’t forget to show hospitality to strangers, for some who have done this have entertained angels without realizing it! (Hebrews 13:1-2, NLT)

Here the author of Hebrews is saying that love isn’t just for your brothers and sisters. The author is saying that hospitality should even be shown to strangers. The text even tells us that, you never know, they could even be angels! It happened to Abraham in Genesis 18, maybe it could happen to you.

What is amazing to me about this and other pictures of Christian community is that it isn’t just for those who we already call family. The command here is to see everyone as our neighbor, not just those who look, talk and think like us. Notice that the passage doesn’t tell us to make strangers act like us, and then we can show them hospitality. It commands us to do it right now, even if we don’t know who they are! And let’s admit it, it is kind of fun to think that the homeless person we gave a meal to could actually be an angel.

When we as Christians can show respect to people outside of our community, it more accurately reflects what Jesus was about than almost anything else we do. True family does not divide into the typical boundaries that our society dictates. True family comes when people love their neighbors (everyone) in the same way that Jesus loves us – with grace, understanding and without prejudice.

1) Do you think that Sasha actually had those conversations with Abraham, or was she imagining them? Why or why not?

2) Do you think Sasha made the right decision by taking the pill and essentially weaponizing herself? Why or why not? If not, what do you think she should have done?

3) Maggie seems to imply that the choices that we make have a huge impact on our community. Do you think that she is right? Why or why not?

4) What precedent did Glenn’s decision to save Rick (a total stranger) in season one set for their community?

5) How are Glenn’s past acts of hospitality still part of our group’s legacy?

7) Do you think that kindness to strangers helps build community? Why or why not?

8) If you are a Christian, do you think that your Christian community shows this kind of love and kindness? Why or why not?

9) What can we as a church do better to be more like a Biblical Christian community?

10) What can you as an individual do better to show Christian love and hospitality?