Season Eight, Episode Thirteen, Do Not Send Us Astray 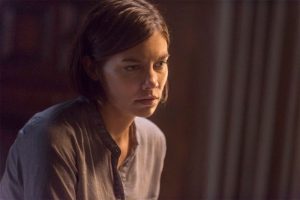 Throughout this entire series one of the biggest themes on the show has been leadership, good and bad.

So far we have seen some great leaders. Rick has guided our group through thick and thin, and while there are some doubters, he has proven to be a powerful leader whenever they came across people or walkers trying to kill the group.

King Ezekiel, who may have had unconventional methods, has proved to be a good leader, creating a safe place for his community and managing to keep most of his people alive (until recently).

But we have also seen some terrible leaders. Remember the cannibal leader of terminus Gareth? Or the crazy Natania of Oceanside whose reaction to having all of their men killed was to just kill everyone they met. Or more recently, probably the worst leader on the show, Gregory, who is the textbook definition of a narcissist.

But this week we are starting to see the leadership skills of one of our favorite characters come to fruition. Of course I am talking about Maggie, current leader of Hilltop. Over the last season, especially after Glenn died, Maggie has been stepping up in her leadership skills and people are starting to notice. She may have had the advantage of taking over after a terrible leader, but there is no question that she is making very wise decisions in Hilltop regardless of where they have been. And tonight two different characters mentioned her leadership abilities.

The first happened the day after the successful defense of Hilltop against the Saviors. Maggie led the resistance to an all out siege and her plan worked fabulously. The next day, Dianne (one of the surviving members of the Kingdom) points this out.

Maggie: What is it?

Maggie doesn’t believe it and tells her how most of her decisions were about getting revenge against Negan for the death of Glenn. But then another character points does it too. This time it is Wesley, one of the people at Hilltop injured by the special weapons that Negan prepared for the attack on Hilltop.

Maggie: How you feeling?

Maggie: We’re lucky to have ’em.

Wesley: We’re lucky to have you. If Gregory was in charge, this… this place wouldn’t be here anymore. He was about himself. What he wanted. That’s not you.

While Wesley may seem a little bit like a “red shirt” in this episode (I can’t help it, I am a major Star Trek fan), he makes a great point about Maggie’s leadership style. She may not be very confident about her abilities, but she is humble and she embodies what I believe is the greatest style of leadership that there is – servant leadership.

In an age where the most notable leaders seem to be authoritarian self-promoters, seeing this kind of leadership praised is quite amazing. Traditionally, I believe that this happens because the servant leaders don’t do things that get them noticed as individuals. What the servant leader does is make others look good and they put the organization and the people that they lead ahead of themselves. So consequently, we don’t hear a lot about servant leaders because, by their very nature they aren’t self promoters. They are typically quick to promote others and share leadership, just like we are seeing Maggie do with Rick and Ezekiel.

Seven years ago, I graduated from Bethel Seminary in St. Paul Minnesota and I took several classes on leadership. One of my favorites was called Transformational Leadership, taught by Dr. McCloskey. During that course, he talked a lot about servant leadership and argued that it is the dominant leadership style demonstrated in the New Testament. One of his favorite passages that he would use to describe this leadership was in Acts chapter six.

In those days when the number of disciples was increasing, the Hellenistic Jews among them complained against the Hebraic Jews because their widows were being overlooked in the daily distribution of food. 2 So the Twelve gathered all the disciples together and said, “It would not be right for us to neglect the ministry of the word of God in order to wait on tables. 3 Brothers and sisters, choose seven men from among you who are known to be full of the Spirit and wisdom. We will turn this responsibility over to them 4 and will give our attention to prayer and the ministry of the word.”

5 This proposal pleased the whole group. They chose Stephen, a man full of faith and of the Holy Spirit; also Philip, Procorus, Nicanor, Timon, Parmenas, and Nicolas from Antioch, a convert to Judaism. 6 They presented these men to the apostles, who prayed and laid their hands on them.

7 So the word of God spread. The number of disciples in Jerusalem increased rapidly, and a large number of priests became obedient to the faith. (Acts 6:1-7, NLT)

Notice that the new leaders of the church have a fresh leadership crisis to deal with. The passage mentions that there are a certain group of people who are followers of Jesus who are not being taken care of by the church while others are. One of the issues here is culture, because these widows mentioned are Hellenistic Jews who speak a different language than the Hebraic Jews. Imagine the challenges that this would bring to any organization.

The problem is related to culture, but it is also related to how rapidly the church is growing. The leaders of the church have taken Jesus’ last words seriously (the great commission in Acts 1) and they are telling people outside their culture about Jesus. Of course, the problem that arises here is that people from outside their immediate culture are becoming Christians. Most of us as church leaders would call this a good problem – the church is growing faster than we can keep up with.

So the twelve come up with a solution that involves electing new leaders. Dr. McCloskey would point out to us that it is very important to see how radical this leadership style is. It is classic servant leadership. Normally leaders try to consolidate power for themselves. Gregory demonstrated this often. This type of leader will never give up leadership, they hoard it.

But this isn’t what the twelve do. Here they give up power and elect seven new leaders. It should be noted that the seven are part of the new culture (you can tell by the names) and in the chapters that follow they are responsible for spreading the gospel even further. Stephen, the first name on the list of new leaders, becomes a preacher and preaches a very important public sermon in the very next chapter (right before he becomes one of the first martyrs of the church) Phillip, the second name mentioned, is credited with bringing the gospel to Africa when he leads an Ethiopian to Jesus several chapters later. We don’t really know what happens with the others, but if they are like the first two, the church is in good hands.

1) Captured savior Alden tells Maggie that the captured saviors are not “his people.” He is implying that he is no longer a follower of Negan. How do you think that Maggie should handle this situation?

2) Do you think that servant leadership applies in this situation? Why or why not?

3) Why do you think that Dianne tells Maggie that she is a good leader?

4) Do you think that Wesley is right that Hilltop wouldn’t be there if Gregory were still in charge? Why or why not?

5) What does Maggie’s relationship with other leaders look like right now? Is she out of her league or do you think she has what it takes to lead Hilltop? Why or why not?

6) The passage in Acts 6 says “It would not be right for us to neglect the ministry of the word of God in order to wait on tables.” Do you think that the twelve think that the issue of serving the widows is not important? Why or why not?

7) The new leaders elected would go on to do more than feeding widows. Does that give us a clue as to what is happening here? Why or why not?

8) Can we imply from the passage that the Hebraic widows were being taken care of? If so, who do you think was in charge of that currently?

9) Is it possible that it was the twelve overseeing the waiting on tables for the Hebraic widows? If so, what does that mean?

10) Have you ever seen servant leadership demonstrated in your life? How does it make you feel? Do you see it as an effective way to lead?

11) What kinds of things can you do in your current leadership roles to be a servant leader?