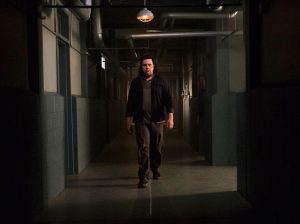 If you have been around Christianity for a while, you may remember the classic evangelistic tract called “The four spiritual laws.” This ubiquitous evangelistic tool was created by Bill Bright when he was with Campus Crusade for Christ and has been used by millions of evangelists around the globe. I mention it because the first point on this tract is “God loves you and offers a wonderful plan for your life.” The tract then references John 3:16, and John 10:10, two verses that concern eternal life and abundant life here on earth. But the question remains, to what degree does God concern himself with our day to day lives?

On tonight’s episode of The Walking Dead, we see this theological debate happening between Father Gabriel and conflicted Savior collaborator Eugene. Eugene is a skeptic who is labeled tonight as a “man of science.” So far we know that he is operating as someone who really has only one goal – survival. And this week he is in a huge pickle (sorry for the bad pun) trying to decide whether his survival is more likely with the Saviors or the AHK (his creative acronym for Alexandria, Hilltop and the Kingdom). But he is also someone who has clearly stated that he is a strong agnostic when it comes to belief in God. In addition, he has demonstrated that he will sacrifice others for his own survival. But Gabriel also has a similar attitude toward survival, and has sacrificed many others including his own congregation. Yet, he is conflicted because he does believe that God has a plan for his life, and he says it overtly tonight. This happens while Eugene is talking to a very sick Gabriel in his hospital bed in the Sanctuary.

Eugene: What you may have forgotten in your request is that I am a small person who does not stick his neck out for anyone other than himself. I stick firmly within my lane without any need for a signal, hand or automatic.

Gabriel: All I want is for you to do the right thing.

Eugene: And what is said definition on that? Can’t say I ever sussed it out. Right for some can be downright horrific for others, and knowing that has kept me vertical when so many have gone horizontal.

Gabriel: It requires faith, trusting yourself. Believing that God is inside of you guiding you and knowing that he has a plan for all of us. Is that so hard?

Eugene sees this discussion as absurd because, to him, he is operating from the standpoint that his only purpose in life is to survive. He is confused on the definition of “the right thing” because he sees the answer as completely relative. If you survive while others die, you obviously did the right thing because you survived and others died. And while this is his stated philosophy, we wonder how ingrained it really is when he looks at Sasha’s coffin. Perhaps he is wondering how you can wrap your brain around the issue of self- sacrifice. How does that fit into his worldview? Clearly, his worldview is still a little bit pliable.

But on the other side, Gabriel seems like he is starting to figure out his own faith. While his ideas last week didn’t seem to have any effect on Negan, it seems to be going a little differently with Eugene. Here Gabriel is continuing his own process of evangelism, even though his theological views may not exactly square with orthodox Christianity yet. But he clearly does believe that God has a plan for his life and that this should be the basis for moral thinking even in the zombie apocalypse. And he even uses the reality of the apocalypse as a reason that Gabriel should be a little more open to the supernatural.

When it comes to my understanding (I am coming from a protestant evangelical perspective), I always look to the scriptures. At The Source for Youth Ministry, we have a high view of the bible, which is why you will see us using the bible in all of our discussions (especially about practical ethics). And in this case, we see where evangelicals get this idea that was so clearly spelled out in Bill Bright’s pamphlet. There are many passages to choose from, but I have chosen a section from Paul’s letter to the Ephesians found in chapter two.

8 God saved you by his grace when you believed. And you can’t take credit for this; it is a gift from God. 9 Salvation is not a reward for the good things we have done, so none of us can boast about it. 10 For we are God’s masterpiece. He has created us anew in Christ Jesus, so we can do the good things he planned for us long ago. (Ephesians 2:8-10, NLT)

As Paul is instructing this ancient church in Ephesus, he is talking about the very nature of our salvation. He is saying that it doesn’t come from our “good” actions, but from God. As a matter of fact, he clearly says that it is “not a reward for the good things we have done.” (vs 9) He calls it a “gift from God.” But then he goes on to explain a little about the very purpose for our lives. It says that “He” created us anew. (vs 10) This means that God is the one doing the saving here. But Paul also explains a little bit as to why God has done this. He says, “so that we can do the good things that he planned for us long ago.” (vs 10)

I believe that this verse serves as an excellent explanation as to the nature of a Christian’s true purpose. Paul is saying that this is something that he planned for us even before we have been “created us anew.” (vs 10) Basically, he is saying that our own purpose exists outside of even some of the decisions that we make. This is why we can’t “take credit” (vs 10) for it. According to Paul, we do have a purpose and God gives it to believers as a free gift, but you just have to believe (John 3:16).

So what is the plan that God has for us? That is the million dollar question, but the scriptures do give us a lot of guidance about how God intends for us to live. Jesus would make it even clearer when he would say that the two greatest commandments are 1) loving God and 2) loving your neighbor (Matthew 22:36-40).

Personally, I think that any purpose that involves loving God and loving your neighbor is clearly something that every believer should focus on. I don’t necessarily involve God every time I need a parking spot (because I have a hard time seeing that as fitting into the two greatest commandments) but I certainly believe that God has a plan for my life. That belief does color the decisions that I make in my everyday life and it most definitely effects decisions that could cause or fail to stop harm to others. For me, my purpose in life comes from the fact that God has saved me through His son Jesus, and because of that, I will always frame my decisions around His biblical commands to love Him and others.

1) By the end of tonight’s episode we see that Rick’s plan was actually going to work. However, several others decided not to wait for Rick. Do you think that Daryl, Morgan and Tara made a mistake by not waiting?

2) Do you think that Daryl, Morgan and Tara are thinking about how their decision is going to affect the workers in the sanctuary? Why or why not?

3) Do you think that Daryl, Morgan and Tara are thinking about how their decision is going to affect their own team? Why or why not?

4) Do you agree with Gabriel that God has a plan in our life? Why or why not?

5) Do you think that Eugene’s decisions would be easier if he believed in a Holy purpose? Why or why not?

7) Do you think that being shown “grace” by God should affect how we treat others? Why or why not?

8) What does it mean (if you are a Christian) to you personally that God had a plan for your life before “He created us anew?” (vs 10)

9) Should having a divine purpose change how you look at making everyday decisions? Why or why not?

By Jonathan McKee 0 Comments
Share
Tags: Bible Discussion, Eugene, Gabriel, The Gospel According to the Walking Dead, The Walking Dead