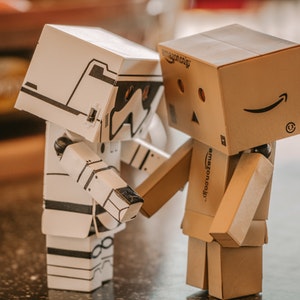 The Problem with Greed
Main Point: On the surface, greed looks like it will serve us well. Instead, it always ends up costing us dearly.

This short film is nothing short of brilliant!

Created by Jack Anderson, a graduate of Dodge College of Film and Media Arts at Chapman University, this 9-minute-long silent video shows the story of two gem-collecting robots that accidentally meet on the surface of a planet and realize they can accomplish more together than they can independently. But not long after their partnership is established, a moment of greed threatens their relationship…and their lives.

There’s no dialogue in the video, but the ending is powerful nonetheless. In the end, it clearly shows the importance of avoiding the dangers of greed.

The Video Clip:
Click the following link for the online video: http://www.jackanders.com/wire-cutters/

Transitional Statement:
We don’t know what the two robots’ names were, so lets’ call them X-Ray and Crush since that’s what their abilities were. When X-Ray and Crush bumped into one another, they soon realized they could partner together and accomplish a whole lot more as a team than they could independently. But then, they ran into a simple problem: dividing up a leftover gem. When the two robots acted selfishly, they both lost much more than just the gem; they lost their lives. This make-believe video carries profound meaning in real life. On the surface, greed looks like it will serve us well. Instead, it always ends up costing us dearly. Let’s learn this lesson now so we don’t pay the price later in life.

A kind man benefits himself, but a cruel man brings trouble on himself. 18 The wicked man earns deceptive wages, but he who sows righteousness reaps a sure reward. 19 The truly righteous man attains life, but he who pursues evil goes to his death.

23 The desire of the righteous ends only in good, but the hope of the wicked only in wrath. 24 One man gives freely, yet gains even more; another withholds unduly, but comes to poverty. 25 A generous man will prosper; he who refreshes others will himself be refreshed. 26 People curse the man who hoards grain, but blessing crowns him who is willing to sell. 27 He who seeks good finds goodwill, but evil comes to him who searches for it. 28 Whoever trusts in his riches will fall, but the righteous will thrive like a green leaf.

Wrap Up:
I really liked the powerful little film we watched about the two gem-collecting robots. I think their choices and consequences have much to say to you and me in our world. The sad bottom line was their greed cost them far more than just gems. Their greed cost them their relationship and their very lives.

Most of us have felt the pain of greed in our lives. Whether it’s a parent who is too busy with their own pursuits to care for us, or a friend who is always thinking of themselves, or someone who repeatedly takes the best of most from life and leaves us with crumbs, greed has a way of rotting us from the inside out. Greed can separate family members. It can separate friends. Greed leads nowhere good.

But greed doesn’t have to be so costly in our lives. We can avoid greed in simple ways. First, we can be aware of how easy it is to be greedy. Second, we can determine that we are going to be generous with others. Then, we look for opportunities to give or serve. Finally, we act on those occasions to be a blessing to those we love.

A wise – and very rich – man once said that the best way to avoid being trapped by greed was to practice generosity. This individual was incredibly wealthy, but he realized that if he wasn’t careful, greed would creep into his heart and it would rob him of the valuable relationships he had with his family, his friends, and his employees. That man practiced generosity, and so should we.

I hope that the video clip we watched helped you to see the devastation that comes from greed. I hope you will decide to avoid greed by being generous with others. It will not only change their lives, it will change yours, as well.