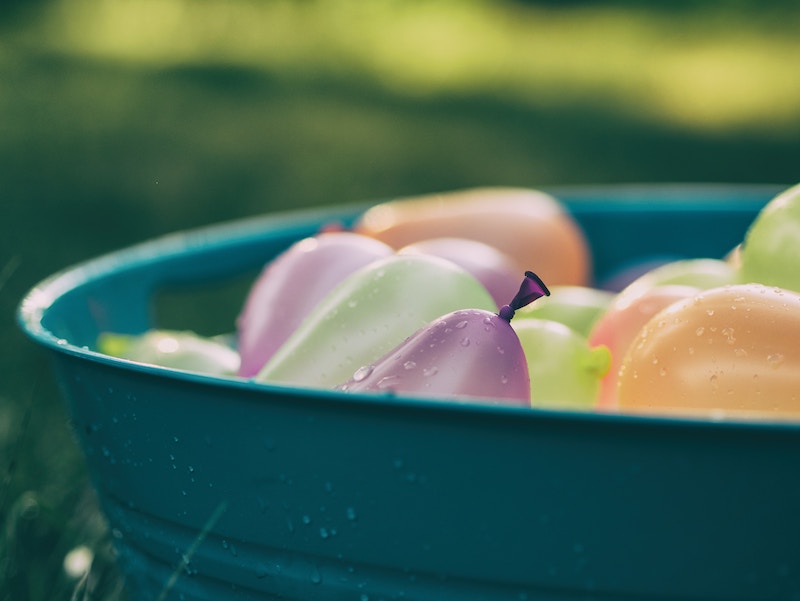 Before the game…
Buy three different colors of balloons, along with three coordinating colors of plastic beads (or something similar). Place one pebble in each matching balloon and fill the balloons with water. So red beads would go in red balloons. Make sure you have enough balloons for your group. You will need at least 10 balloons per student.

Set the balloons out based on color, and also place a cup beside each pile. This cup will be used to place the beads in later in the game.

The game…
Divide your group into 3 equal teams. The object of the game is to throw water balloons at people from the other team. When the balloon pops, both the thrower and the throwee have to run and try to get the bead. The one who gets the bead then deposits it in their team’s cup. (Rule: you can only collect and deposit one bead at a time.) If you grab your own team’s bead, you get 5 points. If you get the other team’s bead you get 10 points. Also, you want to pick up all of your team’s balloon shards; any left on the ground at the end of the game will take away points for your team.

Play for a set amount of time.

The winner is the team with the most points.

This game is fun, and the added bonus is that it cleans up after itself, since the water balloon shards are part of the game.