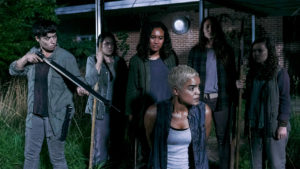 Eight years ago when I was in the Army I learned a valuable leadership lesson while serving in Afghanistan.

I went to the gym one evening because all the other guys were working out, so naturally I felt I had too as well. But, I had no clue what I was doing.

I went to my team leader and asked if I could work out with him, he replied “You know Critter (my nickname), I like working out by myself.”

While I was walking back to my tent, I walked by my brand-new squad leader who I had met earlier that day. He asked what was up, I told what had happened and that I know nothing about working out and the gym. He invited me to join him and we worked out together for the rest of the deployment. An example of great leadership and poor leadership.

This episode of The Walking Dead was, in my opinion, fantastic. Rick tried to take a day off work to spend time with the family. But when people are disappearing and being killed off then riots being started at the worksite, Rick Grimes gets called into action. The groups needed to find out who killed Justin and why the saviors were disappearing.

Cyndie and Maggie team up to clear the grid when they come across an old house that Cindie and her family were at prior to moving to Oceanside. They see that the house is full of walkers and that the noise is going to draw more to them. Maggie asks Cyndie, “You good to follow my lead?”

Leaders set the standard and the example.

Maggie and Daryl walk up to Cyndie holding a gun to Arat’s head while she is on her knees.

Daryl asks the random Oceanside girl if she took out Justin with her harpoon. She says that Justin killed her husband.

Daryl: They got a reason?

Arat: We have all done things…

Maggie: People will find out.

Cyndie: She is the last one. After this, it’s over.

Maggie: Maybe for you. But it won’t be. Something like this keeps going.

Cyndie:This was our home. My mother and grandmother found this place for the group. There were so many of us then. Men and women. Kids. My mom and I built a garden. My brother and I used to play right here. Then the saviors came. And Simon wanted what we had. He gave us our final warning. Afterward, we ran and tried to forget. Then your people came and asked us to fight. We did because we couldn’t forget. After Rick ended it, we went along because we didn’t think we had a choice. Until you hung Gregory. That’s when we knew Rick’s rules were not the only rules. You showed us the way. It was time.

Maggie: You did this because of me?”

Cyndie: (Starting to weep) They murdered my mother. She shot my brother, right here. They took everything because they could.

Arat: Please. Its not like that anymore. I am one of you now.

The scene plays out with Arat begging for mercy because Simon would have killed her too if she didn’t do it. Cyndie recounts the horror saying that Arat laughed as she made her brother beg for his life. No exceptions. No exceptions for Cyndie’s brother and no exceptions for Arat. As Daryl and Maggie turn their back, Arat is killed.

Daryl and Maggie agree that doing things Rick’s way was no longer an option. Maggie says its time to see Negan and Daryl agrees.

Maggie came face to face with the consequences of her decision to kill Gregory. She was seeing the effects of when individuals take justice into their own hands. The precedent created is difficult to unwind.

The impact of leadership is seen and felt further and longer than a leader can imagine. Everyone is a leader. Someone influences someone. The decisions that are made not only affect yourself and your position, but people are watching. Leaders set the standard and precedent. The legacy that is left is how people will remember you.

This got me thinking of King Josiah. He was eight years old when he began to reign, and he was king for 30 years.

“And he did what was right in the eyes of the Lord and walked in all the way of David his father, and did not turn aside to right or to the left.”2 Kings 22:2 (ESV)

King Josiah did some amazing things such as repairing the temple, causing religious reforms, and restoring the Passover. These were very significant things! No one had done any of this in years!

“And the king stood by the pillar and made a covenant before the Lord, to walk after the Lord and to keep his commandments and his testimonies and his statues with all his hear and all his soul, to perform the words of this covenant that were written in this book. And all the people joined in the covenant.”

And all the people joined in…. Leadership, Influence, Significance.

King Josiah had seen the effects of his leadership. He could say and ask, “I wanted to follow the Lord. And you did this because of me?”

Of course, giving all glory to God in this story. But it took a young man to stand the gap and be a leader that people would his ways because he was following God’s ways.

By Jonathan McKee 0 Comments
Share
Tags: Leadership, Maggie, The Gospel According to the Walking Dead, TWD