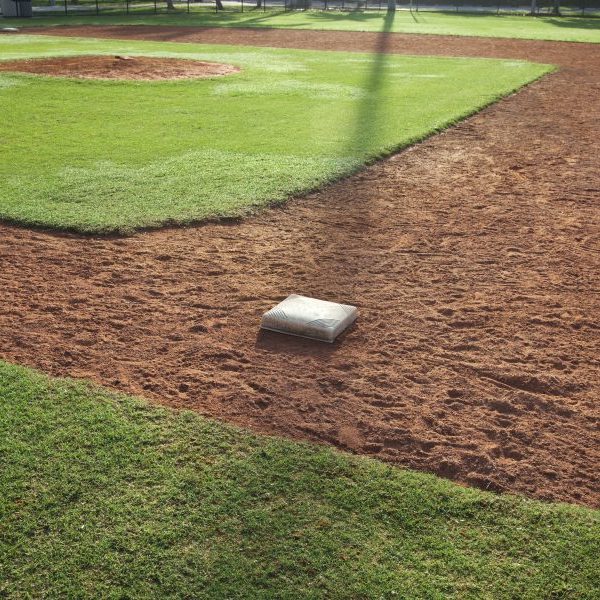 This is an outdoor team game. There are two teams, just like baseball. One team bats and the other is in the field. You’ll need a bat, a dodgeball, and some cones, and a way to mark off a circle on the ground (field marking paint, chalk, etc). Instead of a baseball ‘diamond’, mark off a circle, approx. 75′ in diameter. Put two cones about 6 feet apart on the edge of the circle. This is the “home gate.” Put a third cone on the far edge of the circle, exactly opposite the Home Gate.

Place cones to mark off “foul ball territory” in relation to the ‘home gate cones,’ as in baseball. The pitcher stands in the middle of the circle. Other ‘infilders’ also stand inside the circle. ‘Outfielders’ stand outside the circle. The batter stands in the home gate, awaiting the pitch. The pitcher pitches the dodgeball to the batter, so that the batter hits it with the bat off the bounce. The ball must bounce once before the batter can hit it. The pitcher may pitch in any manner they choose: Overhanded, underhanded, basketball-pass style, one- handed, two-handed, etc. As long as it bounces once. The batter’s goal is to hit the ball into play (fair territory), run around the cone on the far edge of the circle, and make it back through the home gate before being hit with the ball by one of the fielders. The batter may choose any path they wish to circle the cone.

There are no force outs. All runners must run. Infielders and pitchers may not get in the way of the batters/runners.

Runs are scored when batters round the cone and make it safely through the home gate without being hit with the ball from a fielder.

A batter is out if: 1) They are hit with the ball anywhere but the head while running 2) They swing and miss 3 times during the same at-bat, 3) A ball they hit is caught by a fielder or pitcher before it hits the ground, 4) They hit three total foul balls in one at-bat. 5) They elect not to swing at three pitches which roll through the home gate. Foul balls are counted as strikes. There are no ‘walks.’ Fielders may not hit runners in the head. Once the fielding team gets three outs, they switch with the batting team. When both teams have batted once, that makes an ‘inning.’ Play continues until time runs out, or till one team reaches a specific score, or for an agreed-up number of innings.