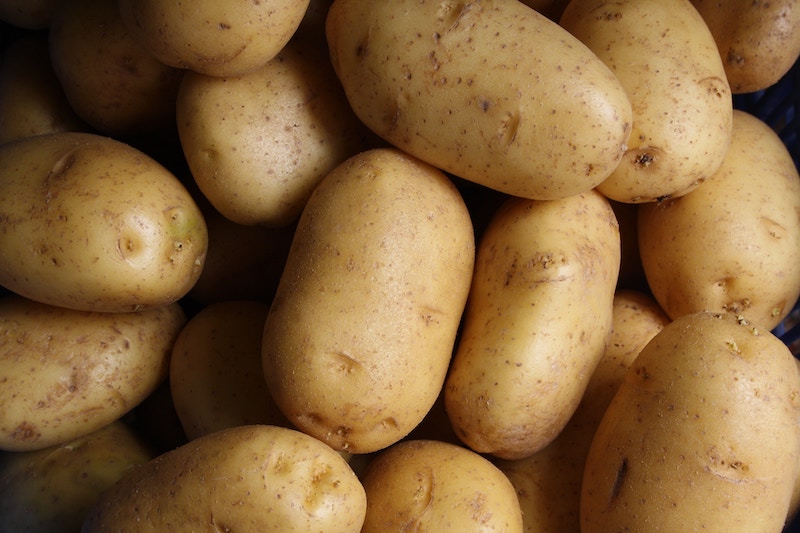 To play this game, you need an open field, several bags of potatoes, and 4 different colored balls of yarn. Here’s what you do.

Prior to the start of the game, spray paint 4 huge circles of EQUAL size that are also evenly spaced from one another in the form of a square. (In other words, make your field a really big “square” with a circle at each “corner” of it.) Then dump a couple of bags of potatoes inside each circle. The size of your field and the number of potatoes you use depends on the size of your group. If you have a big group, paint a big field and use lots of potatoes. Just make sure every circle gets the same amount of potatoes!

When the students arrive, divide them up into 4 equal teams. Assign each team to a circle. Designate ONE player from each team to be the “Giver of the Lifey Band.” That’s right, the “Giver of the Lifey Band.” His job will be to LOOSELY tie a piece of yarn around the waist of every single one of the players on his team, giving them life, hence his title. (Each person gets their own piece of yarn tied around them…think Flag Football.) He CANNOT move out of his team’s circle during the game, at all! He will have to repeatedly tie yarn around his teammates’ waist as they get it ripped off during the game. (More on that in a moment.)

When your teams are even, and everyone has yarn tied around their waists, you are ready to play. The objective is simple. Players run around to the other three circles and snag as many potatoes as they can and take them back to their pile located in their circle.

The trouble is, if your yarn gets ripped off in the process, you MUST drop any potatoes you have in your possession RIGHT THERE (even if you’re NOT in a circle) and go straight to your “Giver of the Lifey Band” for another piece of yarn. When the player has the new piece of yarn tied to his or her waist, only then can he/she re-enter the game. Though players can only have one piece of yarn tied to them at any given time, they can go back to their “Giver of the Lifey Band” as often as need be (there is not a cap).

Set a time limit on the game and start play. Give a 2 minute and a 1-minute warning towards the end of the game. The team with the most potatoes IN THEIR CIRCLE at the buzzer wins.

RULES:
1. Absolutely NO THROWING potatoes. Too dangerous. Expel students who break this rule.
2. Players who decide to “defend” their circle can do so, BUT they must remain OUTSIDE their circle. They cannot stand in the circle, merely hovering over their potatoes. This will kill the game. The bigger the circle, the better the game, because it makes it that much harder….
3. The only player on the team to STAY in their circle is the “Giver of the Lifey Band.” Other players can be in their own circle ONLY when depositing a potato.
4. No unnecessary roughness (tripping, eye gouging, body slams, etc.)

You will probably want a few adult volunteers roaming around as referees. Have fun!