The Message of Christmas: Be a Good Person? 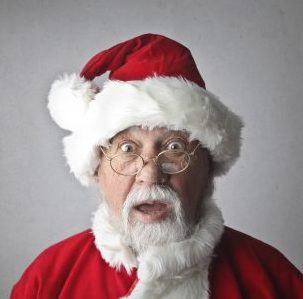 Main Point: Some people say that religion is about being a good person. But because God knew that was impossible for us, He sent Jesus to save us from our sin by His grace.

Introducing The Discussion Starter:
The View is ABC’s daily talk show hosted by a number of (usually) female co-hostesses. When it comes to discussing fashion, celebrities, and feelings, these ladies are cultural experts. But when the topic of discussion turns to faith/religion, a certain amount of ignorance tends to creep into the mix.

During one show back in December of 2015, the panel was made up of the following ladies: Joy Behar, Candace Cameron Bure, Sunny Hostin, Raven Symone, and Paula Faris. The point being discussed was a billboard erected by the American Atheists that said, “Go ahead and skip church. Just be good for goodness’ sake. Happy Holidays.”

Lead anchor Joy Behar turned to Candace Cameron Bure, an outspoken Christian, and asked her if she was offended by the message on the large sign. Candace’s answer surprised Behar.

But it wasn’t Behar who was in for the biggest surprise of the day.

The Video Clip:
The online video can be found at the following link:
http://blogs.thegospelcoalition.org/trevinwax/2015/12/15/the-view-debates-being-good-and-the-gospel/

Transitional Statement:
Who would have guessed that an atheist’s billboard would have given a few Christian ladies the opportunity to declare the good news of Jesus’ birth on national television?!? But that’s exactly what happened in this clip. Joy Behar thought that the billboard would be offensive to Christians on the platform (including Candace and Paula). Instead, she and Raven learned a powerful lesson about human’s inability to be good. These ladies believe what most of the world believes: that religion is about being a good person. But the Bible teaches us that God knew that was impossible for us…so He sent Jesus to save us from our sin by His grace. Let’s discuss the implications for a few moments.

As for you, you were dead in your transgressions and sins, 2 in which you used to live when you followed the ways of this world and of the ruler of the kingdom of the air, the spirit who is now at work in those who are disobedient. 3 All of us also lived among them at one time, gratifying the cravings of our sinful nature and following its desires and thoughts. Like the rest, we were by nature objects of wrath. 4 But because of his great love for us, God, who is rich in mercy, 5 made us alive with Christ even when we were dead in transgressions– it is by grace you have been saved. 6 And God raised us up with Christ and seated us with him in the heavenly realms in Christ Jesus, 7 in order that in the coming ages he might show the incomparable riches of his grace, expressed in his kindness to us in Christ Jesus. 8 For it is by grace you have been saved, through faith– and this not from yourselves, it is the gift of God– 9 not by works, so that no one can boast.

Wrap Up:
I thought it was a little comical when Raven Symone was like, “What, what?” as Candace and Paula told her that Christianity is NOT about being a good person. She looked genuinely perplexed, and was actually speechless. But she’s not the only person to make that mistake. Even Joy Behar thought she was “good enough” until Candace shared with her that “lying” and “coveting” were sins that separated her from God who’s perfect.

Fortunately, Candace and Paula took a few moments to rightly explain to Raven and Joy that Christmas was the first step in God’s plan to save us from our sin. Christianity isn’t about being good; it’s about very bad people being saved by the grace of God.

That’s what the passage from Ephesians was all about, as well! God’s Word told us that we have been saved by the grace of God. It’s not something that we could accomplish in 100 lifetimes. Our rescue and our salvation is all on Him! That’s what the life and death of Jesus was all about: He died for bad people because He knew we could never be good on our own.

I hope you don’t think you’re “good enough.” There is no such thing as “good enough.” You are either saved by grace, or you’re not saved at all. The only way we can be saved is by putting our entire trust and hope in Jesus. It’s by His grace we are saved from sin and death. If you want to talk more about this important step in your life, I encourage you to hang around after we close in prayer and dismiss.