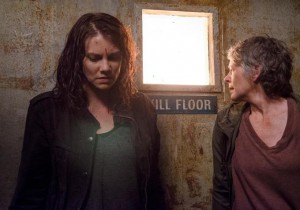 Not everyone experiences this, but probably more people than want to admit have been there.

On tonight’s ‘bottle’ episode of The Walking Dead (a less expensive episode with a few characters and usually one location), Carol and Maggie have to come face to face with the question of what they have become. Even Carol, who keeps a list of the 18 people she has killed in the nightstand next to her bed, has a bit of a crisis of conscience in this episode. But by the end of the episode she is going to have to add at least five more names to her book – with very little sign that the number isn’t going to keep growing.

It’s crazy to consider… because all of us TWD fans are clearly biased… but after watching this episode one can’t help but question: which group is really the bad guys?

The episode starts exactly where it ended last week. Rick and the gang have taken over the Saviors’ compound and they have one live hostage. Unfortunately, the Saviors now have two live ones, Maggie and Carol. Carol has wounded one of them by shooting him in the arm, but the rest are able to take them alive and hurry them to a safe house. Even though the hostage-takers cover Maggie and Carol’s heads with their shirts, we are confident that Rick and Daryl will easily be able to track them and rescue them, if they can just stay alive long enough. The rest of the episode takes place in the safe house where we know a lot of people are going to die.

The Saviors that we meet in this episode (besides the doomed Donnie) are three women named Chelle, Molls and Paula. Paula, played by the amazing Alicia Witt, is definitely the smart one. Chelle is the one who is clearly underwater and Molls (short for Molly) is the cancer infected crazy woman with nothing left to lose. All three of these women are smart, and they seem to have no problem putting down Walkers like they are just a minor inconvenience. They clearly work for a very organized team that even has pre-arranged radio protocols that they have obviously been using for a long time. However, we know that they have no idea who they have as hostages.

Carol begins her all too familiar act of playing the fragile woman who can’t take care of herself. She clutches on to a Rosary which is quickly interpreted as an act of weakness. Molls lights up a cigarette and tells them, “You all are worse than a bunch of evangelical second graders!” Carol simply says to Molls, “Those things will kill you,” to which she replies, “They already have. I’m a dead woman walking. Which puts us in exactly the same boat.”

“The Same Boat” is exactly what all of these characters are in, which is why this is the title of the episode. We know that there is no way that everyone is going to get out of this situation alive. Perhaps none of them will.

When Carol is alone, we discover that her crying may not exactly be an act. Maybe she is actually experiencing a crisis of conscience as she continues to blur the lines between right and wrong. Is she being haunted by all of the people that she has killed? It is easy to forget that at least two of them were innocent people (Karen and David) and one of them was a child (Lizzy). Also, the rosary that she uses as a tool, may also be a symbol of the faith that she lost after she lost her daughter. Is this one last reminder of who she used to be in the past?

Perhaps the most telling line in the episode comes from Chelle while she is questioning Maggie alone.

Chelle: You’re not the good guys. You should know that.

For a second, we the audience, have to think about this. Have the people we have grown to love and empathize for each week actually become the bad guys?

The count so far is Rick 30… Negan ZERO.

Sure, the Saviors have killed people from hilltop, but none of Rick’s team have been killed…yet. And yes, Daryl, Abraham and Sasha were assaulted on the road by the Saviors… but again… only Saviors were killed.

Is it possible our guys aren’t exactly good guys anymore? I guess we won’t really know until we meet Negan.

At the end of the episode, Maggie can’t take it anymore and Carol is clearly conflicted. Her hug with Daryl seems to tell the whole story. He is one of the only people that she can fully relate to. We also get a hint that they are going to talk about this soon (from the preview for the next episode). Carol is troubled by the woman that she has become, and she is either going to have to become numb like Paula, or rethink her whole life philosophy like Morgan did in the bottle episode of the first half of the season.

When I was in my early twenties, I went through a crisis of conscience myself. I had slowly become a person that I didn’t like, and the worst part was the fact that I didn’t even notice it happening. If you knew me in my early twenties, you probably wouldn’t even recognize me now. Fortunately, the problem wasn’t as serious as murder for survival like the characters on the show. But the process was still similar. I was changing slowly, and I wasn’t noticing the changes. Ultimately, I woke up one day and I asked myself, “Who have I become?” I had made so many bad choices that I had actually become quite accustomed to living with them.

I don’t know if this has ever happened to you, but it can really sneak up on you. Sometimes all it takes is a friend to point it out to you. But most of us who go through this type of transformation can end up leaving a lot of friends in the dust. If you are accountable to no one, it is much easier for this process to happen. Fortunately, I had some really good friends and I found comfort, redirection and hope in the Scriptures.

One of my favorite verses comes from Proverbs Chapter 3 where Solomon is writing about trusting God. If you grew up in church, you recognize the first part:

“Trust in the Lord with all your heart and lean not on your own understanding; in all your ways submit to Him, and He will make your paths straight.”

But don’t stop reading there…

I love the sentence “do not be wise in your own eyes.” I think that this is exactly what I was doing. Like many of the characters in The Walking Dead, I had made up my own moral system, and it was failing spectacularly.

Let me tell you from experience, that these attitudes are all relationship killers. I was living a life in which I was wise in my own eyes (blind to the reality which was the exact opposite).

Ultimately, I learned that it isn’t weak to trust in God. It is actually wise. Solomon was right that submission to God does put us on a straight path, and that path leads to truth, faith, grace, understanding, compassion, love and real relationships.

This has been my way for over twenty years now and I wouldn’t have it any other way.

1) Paula mocks Carol for clutching the rosary. Does faith in God make one weak?

2) Do you think that Carol was faking her crisis of conscience?

3) Do you think that they needed to kill all of the Saviors?

4) Have you ever had a crisis of conscience?

5) Have you ever isolated yourself from the opinions of others so you could keep on living the way you were living?

6) Do you think that it is weak to trust in God more than in yourself?

7) Why do you think that Solomon writes that it is wise to “submit to God”?