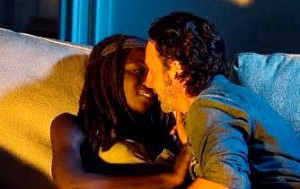 Deanna’s dying words to Michonne were, “What do you want?”

Who would have guessed the answer to that question was… Rick?

Season Six, Episode 10 was quite a switch from prior episodes. A couple months have passed, walls have been rebuilt, Carl’s injury has healed, and people are back to their routine.

And that’s when they met Jesus.

No …not that Jesus… someone else.

For those who don’t follow the comic, Jesus might have been a surprise. He’s a stealthy guy with mad fighting skills, donning long hair and a beard… hence the name Jesus.

Despite the relaxed pace in this episode, Michonne and Rick each had a big day. Michonne helped Spencer take steps to get over his mom’s death, and Rick moralized with Daryl about the ethics (and wisdom) behind adding people like Jesus to their group.

But when the day ended Rick and Michonne did what many The Walking Dead fans have been buzzing about for a long time coming: they had sex.

So let me be bold enough to ask the question:

Notice I didn’t ask if it was wise, natural, or even fun. I asked the same question we’ve been asking in this blog about every other issue:

The Walking Dead fans have been compelled to ask it over and over again:

Is it right to kill someone in self defense?

Is it right to kill one person to save many?

Is it right to steal to survive?

That’s the question this show prompts us to ask most weeks, and funny enough… most people are not asking that question this week.

Because in our world casual sex has become so commonplace, it’s not really even deliberated.

Timely enough, today in my personal blog I linked several studies about Millennials and hooking up. One study revealed that 45% of Millennials (twenty-somethings) has sex in the year prior with a casual date or pickup. But this isn’t always just a stranger they met in a bar. In fact, the concept of “friends with benefits” is growing in popularity. The same study revealed “American adults who had sex with a friend jumped from 54.2 percent in the 1995-1999 cohort to 70.8 percent in the 2000-2004 cohort (and has held steady around 68 percent since).” (You can read my entire post HERE.)

So which was this? Was this just a convenient hook up? Friends with benefits? Or is this the beginning of something more for these two?

On The Talking Dead immediately following this week’s episode, host Chris Hardwick declared, “Quite frankly, I’ve actually been surprised that there’s not been more hooking up on this show because it’s a respite from this horrible, horrible world.”

There’s no question a lot of people are doing it.

Or is this one area where we aren’t supposed to ask that moral question?

Read the following passage of scripture from the Bible:

18 Run from sexual sin! No other sin so clearly affects the body as this one does. For sexual immorality is a sin against your own body. 19 Don’t you realize that your body is the temple of the Holy Spirit, who lives in you and was given to you by God? You do not belong to yourself, 20 for God bought you with a high price. So you must honor God with your body. (I Corinthians 6:18-20, NLT)

DOES SEX REALLY MATTER THIS MUCH? IS MONOGAMY MORE FULFILLING? IS WAITING FOR SEX UNTIL MARRIAGE WISE? IS IT EVEN POSSIBLE? THESE ARE ALL QUESTIONS JONATHAN ANSWERS CLEARLY AND CANDIDLY IN HIS BOOK, SEX MATTERS.