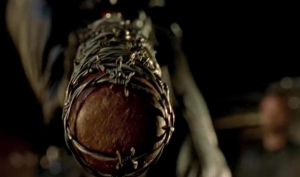 If you are like me, there are just a handful of people that you can really say that about. If you served in the military, you might be able to say that about some of the people you served with. If you are a first responder, it might be some of the people you work with. But for most of us, the answer to that question really is about family and a few of our closest friends.

On tonight’s season finale of The Walking Dead, we realize that almost our entire group can trust each other with their lives. If you think about it, it wasn’t that way even at the beginning of this season. Half of the Alexandrians were completely unreliable (some were even trying to kill members of our crew). Father Gabriel and Eugene were an accident waiting to happen, and most of Rick’s team were knee deep in their own problems. If you don’t believe me, go back and watch the first several episodes of the season. You will see that the team has really evolved and that they are finally a group that can truly rely on each other.

They are now family.

Tonight, we see that our team has really come together. Most of the liabilities are dead (remember Ron and Sam?) and most of the unwise are gone (Denise, you shouldn’t have checked the cooler). But, everyone else has seriously stepped up now. Eugene has pulled it together as he volunteers to go on the mission to Hilltop. The Alexandrians are ready for an attack. Even Father Gabriel seems like a new man.

“We have 24 hour shifts set up on each of the watchtowers, each one of them fully supplied and ready. In the case we’re incurred upon, we have drivers assigned, evacuation and distraction, and the rendezvous we discussed. In the event of an emergency, my first priority is Judith. I will not fail you.”

Is this Tom Cruise in Taps, or Father Gabriel? (Yeah… many of you will have to go back and rent that one.)

Togetherness is born from far more than mere outward appearances. Sure, many of our characters have coupled up this season. Glenn and Maggie are literally going to be an actual family if they survive Negan.

But the unity that has deepened throughout this season has been far more internal. It has been the weaving together of a family – the kind of family in which the members would actually lay down their lives for each other. This is why our cliffhanger at the end of the episode is so upsetting. We know that one of these characters is going to die, and it is really hard to imagine the show without most of these guys.

So who is it? (Chime in- in our comments below.)

Even the most casual perusal of the internet tonight will tell you that the fans are upset. Variety reported that over 70% of the comments on Twitter were decisively negative about the ending. Were you upset?

Scott Gimple even apologized to fans and asked them to trust that they know what they are doing. When it comes down to it, I don’t think that fans can stand the thought of losing one of their favorite family members. All you have to do is look at the online reaction last week when people thought that Daryl might be dead.

Of course, right now everyone is guessing who it is that got their head bashed in by Lucille. Could it be Daryl? No, there would be riots in the streets. We know it won’t be Rick. It probably won’t be Aaron or Sasha because that would just be too easy. My guess is that it isn’t Glenn because all of the comic readers are just expecting it. But almost everyone else could be fair game. It could be Maggie because it would be a nice twist on the comic storyline (and no, I never believed that her haircut had anything to do with it). But would the shows creators really kill an unborn child? Let’s hope not.

It could be Abraham because it would leave some amazing tension between Sasha and Rosita. It could be Michonne because of the shock factor and the pain it would cause Rick. It could be Eugene because it fits perfectly into his storyline at this point. He was prepared to die. Even gave Rick his instructions on how to make bullets. Or it could even be Carl because no one would be expecting it at all.

This is something not even the actors know right now, so we really won’t know much until the premier of season seven. It’s like Jonathan Tweeted Sunday night:

What we do know is that these guys are a very cohesive group and the death of any of them is going to be extremely tragic.

Probably the most interesting character in tonight’s episode was Eugene. He seemed to be the soul of the episode tonight as we watched him gradually realize that they were in serious trouble. Of course, the whole team gradually realized the same thing, but Eugene seemed to be the first to figure out that they all were not going to make it out intact.

As the saviors were taunting them, one of them asked the key question of the episode:

“You’re treating your people good, right? Like it was your last day on Earth? Or maybe one of theirs? You better go. It’s gonna get hot. You go get where you’re going. Go, go. Get on.”

The taunt that bears the title of the episode actually tells us a lot about the trouble that they are in. Like I pointed out last week, Rick has seriously underestimated the Saviors. Did you see it on his face this week when he dropped to his knees? All of Rick’s plans are failing.

While the Savior’s question is really designed to be nothing but a cruel taunt, it does seem to ring true for Eugene. Maybe this is his last day on Earth, and perhaps the only thing that would change that would be a brave sacrifice. He realized that maybe it was time for him to risk his life for his friends.

Eugene comes up with a great plan as the Saviors keep finding them and blocking the RV path on the various roads they are taking. He says, in semantics so Eugenesque:

“So, they’re ahead of us, probably behind us. But they’re not waiting on us, per se. They’re waiting on this rust bucket. And they don’t know the moment-to-moment occupancy of said rust-bucket.”

The rest of the team knows what he is saying – he is going to risk his life for his friends by letting them out and continuing to drive the RV.

I love his reaction when Rick tells him, “Thank you for this. For all of it. We’re lucky you’re here.”

Eugene merely responds “I won’t argue with that.”

Even though the plan doesn’t work and the whole crew is captured anyway, it is an amazing moment. This is when we realize that Eugene’s character has come full circle. He has transformed from the scared, fraudulent scientist to a loyal member of the family. And when his loyalty is tested, he is willing to pay the ultimate sacrifice – he will trade his life for his friends.

“This is my commandment: Love each other in the same way I have loved you.  There is no greater love than to lay down one’s life for one’s friends.” (NIV)

Of course Jesus is talking about what he would ultimately do for his followers when he died on the cross. But he is also talking about the very nature of love and how sacrifice is a huge part of it. Ultimately, most of his disciples would also end up sacrificing their lives for Him years after He died and rose again.

This is a central truth in the teachings of Jesus. Jesus commands us to love each other (verse 17 of the same chapter) and he sees sacrifice as one of the crucial components of love. When we love each other, we begin to put others before ourselves, even to the point of willingness to sacrifice our own lives if need be. And for the followers of Jesus, there is great news – we are grafted together into one family – His family. While we still continue to mess up in this family on Earth, we also grow together, evolve and change for the better as we grow in our relationship with Jesus. Ultimately, our family in Jesus is not the dysfunctional family like many families we see around us. In actuality, the family of God is a family where there is no sacrifice that we can make that hasn’t already been made for us. And that love is what motivates us to trust in each other and to serve and sacrifice for one another.

2) Does Eugene do the right thing when he decides to risk his life by driving the RV while the others walk through the woods?

3) If Eugene had died driving the RV while the others escaped, do you think he would have been okay with that?

4) When Negan kills one of Rick’s team members, do you think this will make them want to serve Negan? Why or why not?

5) Do you have anyone in your life that you would sacrifice your life for?

6) Is there anyone in your life who would sacrifice their life for you?

7) Have you ever been part of a family where people sacrifice for each other?

8) What does it mean that Jesus was willing to sacrifice his life for all of us?

9) Knowing that He did, how should we respond?

10) How can you specifically “Love each other the same way I have loved you” this week?