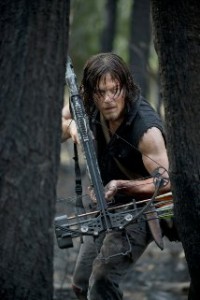 Is it wrong to lie if no one finds out? What about cheating? Stealing? Does personal integrity matter if no one is there to appreciate it? These questions lie at the heart of tonight’s episode “Always Accountable” on The Walking Dead.

Are people accountable for their actions in The Walking Dead universe? Think about it. There is no more government. There are no more courts, police or jails (unless you count the cell in the cheesemaker’s house). Even in semi-organized communities like Alexandria, there are all kinds of disagreements about how you define morality and justice. Many characters have their own codes and live by them. But are they really accountable to their own codes… or to each other?

I think this question goes to the center of why people love The Walking Dead so much. The show allows us to fantasize about what choices we would make if all societal restraints were taken away. Would we try to survive? Would we try and remake our own civilization like Alexandria? Would we wander across the wasteland and scavenge or even pillage? The answer to these questions depend deeply on our own views about morality and justice.

Tonight’s episode begs the question, “Do our choices matter when no one sees us?” The story takes place on the same fateful day that most of the other episodes in this season take place, but this week we get to see what Sasha, Abraham and fan favorite Daryl are up to. The last time we saw these three, they were still leading the Walker mega-herd away from Alexandria until they realized everyone else was in trouble. So we start with them breaking away from the herd and suddenly getting attacked by unknown assailants. We aren’t shown who these people are, but they are chasing Sasha and Abraham’s car and Daryl’s motorcycle while firing automatic weapons at them. Ultimately, our heroes all get away while taking a few bad guys out in the process. Sasha and Abraham end up in an insurance office and Daryl ends up in a badly burned up forest.

While Sasha and Abraham are in the insurance office, they get to have a short respite from danger. They leave some clues for Daryl, whom they know is an expert tracker, and then they just wait for him. Abraham has a little time to scavenge and he hilariously learns that patience is a better plan. His reward for his patience… a Russian made rocket propelled grenade launcher and several rockets (we can’t wait to see how he is going to use these)! But while they are holed up in the office, Sasha has a little time to talk about the question of accountability.

“You jump out of an airplane, you don’t have choices after that. Maybe you play some chicken with the ground, but if you pull the rip-chord, you live. But if you have a roof over your head, you have food, you have walls, you have choices. And without walkers, and bullets, and [excrement] hitting the fan, you’re accountable for them. I mean, [heck], you’re always accountable. It’s just, with all that other noise, you know people won’t notice.”

Her point is that the choices they make are always important. They just don’t always get noticed in the chaos of the zombie apocalypse.

Meanwhile, Daryl is living out the implications of Sasha’s question while he is in the burnt out forest. While dazed from a motorcycle crash, Daryl is captured by three new characters, Dwight, Sherry and Tina. They seem to be running from someone, but they don’t seem to be a real threat to Daryl. When he makes an easy escape (I love how he just pops off the ropes tying his hands together with a few tugs from his teeth), Daryl realizes that he accidentally has Tina’s insulin. Daryl is alone in the woods with no one watching and none of his friends would ever know if he just kept going. However, this is not in Daryl’s character. Daryl is the type of man who cares deeply about the choices he makes, and he goes back to give them the insulin. In the process, he actually ends up rescuing them from the people with automatic weapons, who were chasing these three, not Sasha, Abraham and Daryl. Apparently they were part of some group that sells safety to people at a high price and forces people to “kneel.” Comic readers might possibly recognize these guys as the saviors, but we don’t know for sure. Unfortunately Tina dies in the process (melted fiberglass walkers? eww!) and just when they are free, Dwight and Sherry turn on Daryl and steal his crossbow and bike. Little do they know that Tina is actually the lucky one. When Sherry says sorry to Daryl, he simply says “You’re gonna be.” Chills were running down my spine.

What we come to realize is that Daryl was actually still recruiting for Alexandria. Remember how Daryl was rarely in Alexandria during the good old days because he was out recruiting? Remember how Rick told him to stop recruiting and Daryl told him that he was going to keep doing it? Well, when Daryl tells Dwight that “I’m from a place where people are still like they were, more or less, better or worse,” you realize that he is recruiting these guys for Alexandria. He was showing them incredible mercy, and they have no idea who they just double crossed.

At the end of the episode, Daryl rejoins Abraham and Sasha with the help of “Patty,” their new gas truck. Perhaps he has discovered a solution to the problem of the mega-herd from Dwight and Sherry’s truck (and their story about the giant fire killing most of the walkers in their part of Virginia). But most importantly, we hear a faded voice over the radio saying “help!” as our three heroes travel back to Alexandria. Despite the debates all over the internet, we really have no idea who the voice is. It could be Glenn who has somehow managed to survive his ordeal. Or it could be Dwight, indicating that he was captured by these new bad guys (or even the wolves). But no matter who the voice is, we know that Daryl, Abraham and Sasha are not going to ignore it, and they will make the right choice. It is just who they are.

As a Christian and a pastor, I am all too familiar with this discussion. I believe that Sasha is right when she says we are “always accountable” for our choices. But, the difference is… when I am alone in the woods, I know that I am not really alone in the woods.

This idea is taught extensively in the Bible. It arises from the very beginning in the garden of Eden and continues all the way through the book of Revelation. Throughout the scriptures, we are taught that God is all-seeing and all-hearing, and that we are always accountable to Him for the choices we make.

“Remember, we will all stand before the judgment seat of God.  For the Scriptures say ‘As surely as I live,’ says the Lord, ‘every knee will bend to me, and every tongue will declare allegiance to God.’ Yes, each of us will give a personal account to God.”

Essentially, what Paul is saying is that nobody gets away with anything. In the context of this verse, he says this to remind Christians to stop judging others, because ultimately, God is the judge.

From a relational stance, if I lie to my wife (or in your case, maybe a boyfriend or girlfriend), but they never find out, is it okay? Do I need to confess my lie to my wife? Some would argue “no.” But does this display integrity in my relationship with my wife who thinks she can trust me?

Of course not. To be true to my wife, I must admit when I’m in the wrong, or when I’ve done something wrong even when she didn’t know about it.

To some, this is very disturbing. To others, like myself, it is comforting. Our relationships with others are a mere reflection of our relationship with God. God desires our honesty, our integrity, our confession when we’re wrong and our striving to do what’s right. Knowing that an all-seeing, all-hearing and all-loving God is with me and knows every thought in my head and every action I take gives me an awareness that integrity does matter – even when no one else is looking – because God always is, and it matters to Him.

1) Dwight asks why Daryl came back after they knocked him over the head, tied him up and threatened to kill him. He simply answers, “Maybe I’m stupid too.” Did Daryl make the right choice in bringing the insulin back?

2) Would you have gone back to deliver the insulin? Why or why not?

3) Why do you think Sasha thinks that we are “always accountable” for our choices? Do you agree?

4) Would you feel okay if your friend lied to you but you didn’t know it? Why or why not? Would it be okay if the tides were turned and you were in the position of liar?

5) In what ways are you accountable for choices you make each day?

6) On a scale of 1-10, what place does integrity rank in your life? Why is that? Do you want to change that? What does this look like in your life this week?