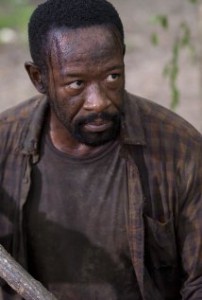 What is your code?

Defend your family by all means necessary?

Survival of the fittest?

Morgan’s powerful “testimony” forces us to wrestle with our own personal philosophies this week, as we discover why he chooses mercy every time. It all began with his personal Yoda, a post-War Aikido master with a contagious moral code.

So who is this mentor of Morgan’s?

“Blessed are the cheesemakers!” That’s what the people thought they heard Jesus saying on the Sermon on the Mount in the extremely controversial 1979 Monty Python film The Life of Brian. And this week, In Episode 604 of The Walking Dead we find out that the “cheesemaker” Morgan mentioned is indeed a peacemaker named Eastman with a personal code much like Jesus (and I’m pretty sure writer Scott Gimple was hinting to that connection). Eastman actually makes cheese from the milk of his goat Tabitha, because he is a vegetarian and has decided that killing is no longer an option.

Eastman is a former forensic psychologist whose entire family was killed by one of his patients. He in turn lures the killer into his remote cabin in the woods and starves him for 47 days, but is never caught or punished for his revenge murder because the zombie apocalypse begins. As time goes on, this murder begins to eat at his heart. “What I did to him, it didn’t give me any peace,” Eastman admits. “I found that peace when I decided never to kill again. To never kill anything again.” This is the man who becomes Morgan’s Yoda.

Tonight’s episode was a 90 minute stand alone episode that doesn’t answer any of the questions that left us hanging after last week’s episode. There is no mention of Glenn (is he really gone?) or Rick, or any of our other heroes. Instead we get to dive deep into Morgan’s story from the very beginning leading up to the events that occur in Alexandria. The story shows us how he becomes the crazy man that we met back several seasons ago, but then more importantly how he transforms into the zen warrior that he is today.

The cause of this transformation… Eastman, the cheesemaker and Aikido master. Morgan happens upon Eastman’s house and tries to kill him. What is Eastman’s response after he knocks Morgan out with his staff and puts him in his cabin’s jail cell? He says, “You shot at me. I fed you.” It turns out that Eastman believes that the way of peace is the only way that you can learn to live with yourself.

“We’re not built to kill. We don’t have claws, fangs or armor. Vets that came back with PTSD… That didn’t happen because we’re comfortable with killing. We’re not. We can’t be. We feel. We’re connected. You know, I’ve interviewed over 825 people who’ve done terrible things. I’ve only met one evil person. Some of them were born with bad brains, some of them got sick along the way. The rest were just damaged people, traumatized themselves like you, but they could heal. Some more, some less, but they all can. I know it. It’s all a circle and everything gets a return.”

Eastman convinces Morgan that Aikido, the Japanese martial art made most famous by Steven Seagal, has changed his life. He gives Morgan a book called The Art of Peace by Morihei Ueshiba, the founder of Aikido. This book has an inscription that reads, “Aikido means not to kill. Although nearly all creeds have a commandment against taking life, most of them justify killing for one reason or another. In Aikido, however, we try to completely avoid killing even the most evil person.”

This idea seems to resonate with Morgan and the martial arts training sequence begins.

Aikido is a martial art that has always fascinated me. If you are familiar with Aikido, you know that there are many different schools with very different philosophies. The reason for this is that Morihei Ueshiba , or O’ Sensei as he is called in most dojos, went through a major transformation himself. Before World War II, he invented Aikido, drawing from a combination of various Japanese and Chinese martial arts. He was responsible for training Japanese soldiers for the war and he trained them to kill with Aikido. But after the War, he felt tremendous regret for teaching people to kill others, so he developed a completely different form of Aikido where the Aikidoist actually protects the attacker while defending himself and others from their attacks. In this new form of Aikido, there are no attacks, just defense from attacks. This is why you hear Aikidoists refer to the type of Aikido they are learning as “pre-War” Aikido or “post-War” Aikido.

Eastman has become very in tune with the “way of peace” that he learned from post-War Aikido, and it has colored the way he looks at the world. It has completely transformed him and consequently begins the transformation process for Morgan. Here we learn how Morgan learns to deal with his own PTSD – by becoming a pacifist. Eastman teaches him that learning how to live with yourself, is a major part of how you keep it together in the zombie apocalypse.

The big question on this show has always been about whose philosophy works the best in this world. While the Alexandrian’s optimism has been great while they haven’t been under attack, it seems to be breaking down right now. So, we as viewers are left to question which philosophy these characters are going to need to adapt to – the way of preparation and decisiveness, like Rick, or the way of peace like Morgan.

Honestly, I think that the jury is still out on this. In the final scene, we see Morgan trying to “Eastman” a captured wolf. He tells him his entire story about his mentor ending with a description of Eastman’s death. But the wolf says, “So, I know I’m probably going to die. But if I don’t, I am going to have to kill you Morgan. I’m going to have to kill every person here. The children too. Just like your friend Eastman’s children. Those are the rules. That’s my code. But you said it, right? Don’t ever be sorry.”

The wolf recognizes the character in the story that he relates to most is the evil man who killed Eastman’s family. What should be done with evil men? We know what Rick would do. But Morgan is trying something different and we have no idea how it will turn out.

My first feeling is that Rick’s way is safer. But the question as to how you live with yourself when you kill people is a profoundly important one. I have to admit that I believe Morgan’s way is much more in line with my Christian faith. This is also why you meet so many Christians in Aikido dojos. The way of peace just seems much more in line with the teachings of Jesus.

The passage that Monty Python was making fun of comes from Matthew chapter five. We call the passage the beatitudes, a short section at the beginning of Jesus’ Sermon on the Mount that describes the ideal picture of what a follower of Jesus would look like.

This sermon amazes me every time I read it because it is so incredibly countercultural. The meek and the spiritually poor aren’t those who most Christians aspire to become. In verse 9, Jesus comes out and says that peacemakers are the ones He calls “children of God.”

Peacemakers? Really? But Jesus means what He says and He explains why at the end of this section. He says “great is your reward in heaven.” You see, Jesus doesn’t teach that life will be easy, but He does seem to imply that those who prefer the way of peace (vs. 9) and mercy (vs. 7) have every reason to be hopeful and “rejoice and be exceedingly glad.” What Jesus is teaching is that the way of peace is His way, and ultimately the best way for us to be able to live with ourselves and with our creator.

SEASON 6, EPISODE 4 DISCUSSION QUESTIONS:
1) If innocent people die because Morgan chooses not to kill, does that make his philosophy wrong?

2) Do you think Jesus would want Morgan to kill the captured wolf or show him mercy?

3) Do innocent people still die as a result of Rick’s philosophy?

4) In what ways are Eastman’s beliefs similar to Christian beliefs?

5) The door of the cell was never locked, meaning that Morgan had more choices than he thought. How is this similar to the way God treats us?

6) Morgan now believes that people can change, even some of the most evil ones. Does this message coincide with the teachings of Jesus and the Bible?

7) How do you think you should react when faced with people who try to hurt you?