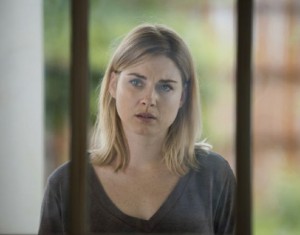 If you want to know what someone really thinks… just watch them. Their actions will speak far louder than their words.

That truth was evidenced loudly in Episode 605 of The Walking Dead Sunday night, an episode overflowing with Alexandrians giving speeches, so many discourses in fact, that some might have found the episode slow. Jonathan, the founder of this blog (and my brother) texted me while I was writing this post and wrote:

Lamest episode ever! It felt forced. So many speeches they should have titled the episode ‘Soapbox.’

(Jonathan rarely has anything bad to say about this show, but he sure didn’t care for the writer of this particular episode and wants Scott Gimple back at the helm.)

Maybe some fans are frustrated because they, like me, really want to know Glenn’s fate, and here’s yet another episode that doesn’t go there. But this episode actually revealed quite a lot:

We actually learned heaps in this episode, just not what we hoped to learn. We still don’t know where the wolves are and what their plan is. We don’t know any more about that wolf that Morgan tied up and locked in the basement. Is Carol’s secret out yet? Is Enid a wolf? And most importantly, what about Glenn?! Is he really dead? (Were those his guts, or Nicholas’?) Do we have to wait another week to figure this out? (if you saw the previews for next week, it looks like we might be waiting even longer to find out.)

Now is an apt title for this episode because most of the Alexandrians realize for the first time that their idyllic past is definitely over. Some of them realize that their future will largely depend on the choices that they make now. In the past, the Alexandrians have been able to bury their heads in the sand without too many consequences. Now they know that this is no longer an option. (I also think that the writers are telling us that we need to pay careful attention to what is happening now, during this episode, not what has happened in the past or what might happen in the future.)

We encounter Jessie at one point in this episode having to put down a walker who was an Alexandrian who had (probably) committed suicide. The whole town gathered around Jessie as she stabbed her in the eye. She then turned to give, what my brother described as yet another forced speech. She said, “I used to not want to see the way things are. It’s not that I couldn’t, it’s that I didn’t want to. But this is what life looks like now. We have to see it. We have to fight it. If we don’t fight, we die.” While this is one of the many speeches that made my brother cringe, Jessie is onto something here. She realizes, like Carol did in Season One, that she is responsible for her own fate. She needs to become a part of the solution, or else she is just a part of the problem.

In contrast, earlier in the episode, we heard a similar speech from Spencer. He caught a bunch of Alexandrians stealing food from the pantry and launched into a sermon saying, “Doing this will start us down a road where nothing matters, where no one else matters. And then we will look back on this moment right now as when we destroyed this place.” It was a good speech, but it was different from Jessie’s speech in one very distinct way – Spencer wasn’t speaking from the heart. It was just words. Later, his mother Deanna catches him drunk from pantry whiskey and eating pantry snacks. She confronts him on his hypocrisy and he merely dismisses her by saying, “If they all went in and raided the pantry, and everyone knew it, saw it, then that would be the end. But one person? No one would ever know. So why not me? I stopped that little run on the bank. I deserve a reward. One last celebration.” Spencer believes that what others don’t know can’t hurt them.

What is the big difference between these two speeches? Spencer manipulates with words in order to calm the masses. In some respects, his words aren’t unlike similar speeches that his politician mother made in the past. There is clearly a separation between his words and his actions. Jessie, in contrast, speaks words from a sincere heart, realizing that if her words don’t inspire action, they are useless. Jessie, legitimately knows that they need to learn to act if they are going to survive. I believe she likes Rick for these very reasons. He is decisive. He is a man of action. He gave a speech tonight too, but it was all about what they needed to do in order to survive. On this show, actions speak volumes, and those Alexandrians who learn this will survive. Those who don’t, will die.

Action versus empty words – this is a vital theme that appears throughout the Scriptures. We see this emphasis perhaps most significantly in the book of James. In the first chapter, James tells us:

“But don’t just listen to God’s word. You must do what it says. Otherwise, you are only fooling yourselves.” (1:22, NLT)

This idea is then repeated throughout the rest of the letter. What James is saying is that listening to the Word, and by implication, “talking” about the Word, is not the same thing as doing what it says. This may seem obvious to some, but how many Christians do we know who talk a good game, but when it comes time to act, never seem to step up?

As a pastor, I see this all too often. Leaders, teachers and even other pastors teach the Word, but when it comes to their personal lives, their actions speak louder – we realize that they are speaking just empty, insincere, dishonest words and not living them out. When these people are caught in their hypocrisy, they silently slip into the pews of another church and hope that no one notices. I know this because I have been this person.

I know hypocrisy firsthand because I spent a lot of time in my teens and early twenties saying one thing on Sunday, and acting very differently throughout the week. What I found was that James was right. This kind of hypocrisy ultimately will only lead to spiritual decay and death.

In reality, what we do is the best reflection of what we think.

1) Did Spenser’s actions matter? Is hypocrisy justified when it’s done in secret?

2) If someone doesn’t know that you are lying, is it actually wrong? (if a tree falls in the forest a no one is there to hear it, does it make a sound?)

3) This episode was called “Now”. Why do you think that was the title of the episode?

4) Why is “now” important in Alexandria?

6) What do you think James means when he says, if we don’t do what the word says we are “only fooling ourselves”?

7) The author of James was most likely Jesus brother, and didn’t become a Christian until after his brother’s death. What do you think James feels about actions vs. words?

8) Do your actions always match your words? Is there an adjustment you need to allow God to make in your actions this week?