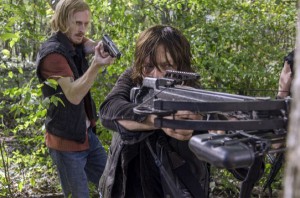 It is usually in that moment when you feel the most confident that bad things happen.

I don’t know why this is, but extreme certainty has a way of blinding me. My mother used to remind me of this by saying, “Pride comes before a fall.” As a little kid, I never really knew what that meant exactly, but as an adult I understand it perfectly.

The phrase probably comes from Proverbs 16:18, but it has evolved over the years to simply mean that overconfidence can, and usually does, lead to disaster. I can’t tell you how many times this has been true in my life. Whenever I assume “I got this”…it usually turns out I don’t.

In film and television, this is so common that it has actually become cliché. Just think about how you react when you hear a character say, “Nothing can stop us now!” Nine out of ten times, it means that within 15 seconds they are doomed.

This is where our heroes are on The Walking Dead this week. They are suffering from all sorts of delusions right now, but we are beginning to realize just how vulnerable they actually are. Up until last week, they have been very lucky with the Saviors. Daryl has blown up a group of them with an RPG. They killed a whole compound of them while they slept. Carol eliminated large numbers of them in gunfights, knife fights, hand to hand combat and has even burned a few alive. Even Eugene was able to get the best of them last week with his very unusual distraction technique, making it possible for most of the team to escape what seemed like certain death. Until last week, we hadn’t left any survivors either, and Denise was our only casualty. But the tide is starting to turn. Last week, Dwight and a few other Saviors got away, and this week, one of Carol’s victims escaped with only a shoulder wound. We can assume that Negan will be getting lots of intelligence reports about our team from this point on.

Rick seems to be the one who if suffering from the most overconfidence. At the beginning of the episode, he told Michonne:

Rick: When they come for us, we’ll end it – the whole thing. This won’t be like before. The world’s ours. And we know how to take it. Everything we need is right here inside these walls. And we’re not losing any of it again.

He might as well have said, “Nothing can stop us now. Nothing!”

Shortly after this naive declaration, things just started falling apart. Carol snuck out of Alexandria because of her existential crisis (but not before she sewed a “Travis Bickle” gun into her sleeve). Daryl left to hunt down Dwight on his own. Then, for some reason, others just started pouring out of Alexandria to try and stop Daryl and Carol. How many times do they have to get ambushed on a road (or train track) before they learn that it might not be a good time to go traveling in the countryside in small numbers?

Before long, they end up in another ambush. Dwight and a small band of Saviors are able to get the best of Glenn, Michonne, Rosita and Daryl with very little effort. Dwight even seems to shoot Daryl, but we know that this isn’t probably the way that Daryl will go out. This show has also taught us not to assume anything after the ‘Glenn under the dumpster situation’ in the first half of the season (We know that no one is really dead until the actor playing them shows up on The Talking Dead). I don’t think Daryl is going to be leaving the show any time soon. Perhaps it was Rosita’s blood that we saw. Remember – the Saviors always kill one of them to let them know that they are serious.

It is hard to know exactly what is going to happen during next week’s 90 minute season finale, but one thing is for sure – a lot of people are going to die. Unfortunately, we will probably be saying goodbye to at least one of our central characters. My guess is that it won’t go down the way it did in the comics, but more likely, one of the characters we know and love will be on The Talking Dead next week. And the sad part is that it’s largely their own fault.

As a husband, a father, a pastor, and a Christian, I need to really think about this. Overconfidence in myself and my own abilities can often lead to disaster. In 1 Corinthians 10:12 Paul says:

“So, if you think you are standing firm, be careful that you don’t fall!” (NIV)

This comes right before one of the most famous verses in the Bible about temptation, but I think it serves as a potent warning about overconfidence. I think that Paul is telling us that the minute we stop being vigilant about sin, we become the most vulnerable.

Think about it. When we start to feel the most confident in our own abilities, we start to forget about the true author of our abilities – God – the creator of the universe. In addition, we also forget to rely on others for accountability, strength, and guidance.

I don’t think that humans are made to operate in a vacuum. Strength and endurance usually come from reliance on God, friends, family and the church. When we forget this, we open ourselves up to some of the most terrible decisions. We take enormous risks, ignore wisdom and often end up looking back and wondering where we went wrong. The truth is, we went wrong the minute we decided to turn a deaf ear to others and go it alone.

1) Carol has a gun in one sleeve and a rosary in the other. She is trying to figure out whether she is going to live as a pacifist or as a warrior. Do you think that she knows which path she needs to follow?

2) When Carol has a panic attack, do you think it was real, or do you think that she was faking it to throw off the Saviors? Explain.

3) Morgan says that, “It’s all a circle. Everything gets a return.” What does he mean by this?

4) Do you believe that this is a principle that Christians should pay attention to? Why?

7) Have you ever been blinded by overconfidence? What happened?

8) Do you think that overconfidence can blind you to reality? Does it sometimes make you more vulnerable to sin?

10) What is something in your life you might need to humbly bring before God and ask for His help?