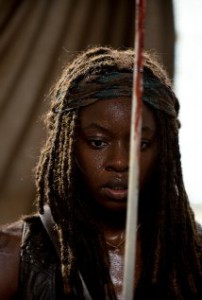 A question posed from Deanna, lying on her deathbed.

What would you answer?

The Walking Dead has a unique way of asking us the big questions about life, questions that we wrestle with for the next week. Sadly, this week are asked to wrestle with it for a few months, as this episode was the mid-season finale.

If only the rest of the episode was as thought provoking.

I haven’t posted very many negative things about The Walking Dead this season. Partially because I love the show so much that I don’t nitpick it like so many haters and internet trolls. But this week’s episode had me throwing my hands up several times exclaiming an audible, “Really!”

First, allow me to squeeze in one complaint from last week. Glenn’s “fake” death. Did you buy it? Could someone escape a mobbing herd of walkers by simply sliding under a dumpster? I let it go because I grew up reading Sherlock Holmes and superhero comics where people came back from the dead with much lamer explanations than TWD did last week. (Remember Moriarty and Sherlock and the Reichenbach Falls anyone?) I can forgive a lot when it comes to a show like this. I even didn’t mind episode five that much, even though my brother really disliked it…but that episode at least wasn’t a mid season finale!

I was really disappointed in this show tonight. The episode didn’t suspend my disbelief the way I needed it to. In fact, the only element that got me excited was the hint that Negan and the Saviors are coming soon, but only comic book fans have any idea what that is. (Some of you are wondering what I am talking about because you wouldn’t even know that unless you watched the Talking Dead or the first commercial break of Badlands.)

This week’s episode pushed my skepticism sensors to their limits. First, Alexandria is infiltrated by literally the largest herd we’ve ever seen… and no one was killed but Deanna? (who apparently fell on a sawblade, or was bitten… which was it?)

Carl and Ron fought briefly, but the conclusion and subsequent cover-up was so abrupt that it was hard to know what was accomplished. All we knew was that it resulted in zombies getting into the house where almost all of our heroes were.

But the show really lost me during the scene with Morgan, Carol, Denise and the captured Wolf. Absolutely ridiculous. First of all, these guys have been around long enough to know to not turn their backs on anyone or anything dangerous in this world. Neither Morgan nor Carol, even while engaged in hand-to-hand combat, would turn their back on a Wolf. Second of all, when Tara and Rosita gave their guns to a Wolf armed with a knife, I started to check out (I was screaming, “Take the shot!”). I didn’t believe for a second that they would have done that or that the Wolf wouldn’t have killed all of them when he did have their guns.

This was a mid season finale, and my guess is that it may work better for those who watch the two halves of the season together when it resumes in February. But Scott Gimple and the rest of the producers of the show have to know that they are going to need more payoff in the mid season finales. The show has incredible ratings right now, but a show that potentially has no ending is going to have to figure out how to wrap up story arcs much more efficiently or the show is going to “jump the shark.” (google it if you don’t know what that means!)

However, regardless of whether the show suspended our disbelief enough, it did bring up a very important theme. This happened mostly in the dialog between Deanna and Michonne, after Deanna was bitten (maybe?). Most of this season, which has basically taken place in several days, Michonne has been dealing with questions of purpose and meaning. Like a soldier coming home from war, she has had to wrestle with questions that anyone who has seen incredible violence deals with when they return to civilization. Alexandria has provoked this in her as she tries to reconcile the side of her that is a warrior and the side of her that wants to live in peace. This all comes to a head in a very important scene in this episode:

Deanna: I’m lucky Michonne. Working with my family towards a better future is…it’s all I ever wanted. That’s what I got. I got to do what I wanted right up to the end. What do you want?

Michonne: I want this place to work.

Deanna: Yes, but what does that mean for you? What do you want for you?

Later on in the episode, Deanna says to Michonne (in what could be their final conversation) “What do you want? Now you figure it out.” Michonne simply promises, “I will.” Deanna clearly feels that she has found a purpose even in a world that is falling apart at the seams. She hopes that Michonne will also discover this instead of giving up like so many others have. While she is naive to the devastation in the outside world, Deanna still has experienced horrible losses. But she has found purpose in the meaning of the Latin phrase that her late husband used to utter “someday this pain will be useful to you”. She hopes that this wisdom will be passed on to Michonne and that she will discover her own meaning and purpose.

As a Christian, I have to say that meaning and purpose are things that I think about constantly. I can’t imagine what it would be like to not have any meaning or purpose in life, and I have met quite a few people who feel this way. It is usually the result of terrible trauma and an emptiness that is felt as a result. However, I think that most people do find meaning and purpose in all kinds of things in life. Some find it in their vocation. Others find it in all of the pleasures available in this world. Many people, myself included, find it in the relationships with family and friends. These can all be good things that most of us would see as very positive. But people also find meaning and purpose in things that are destructive. The addict finds meaning and purpose in getting the next high. The abuser finds it in victimizing others. Some find it in revenge and violence or greed. But regardless of whether these things are helpful or hurtful, there is one thing in common with all of these things – they are all temporary. No matter how hard we try, we will never be able to find eternal purpose in any of these things.

“Therefore, my dear friends, as you have always obeyed—not only in my presence, but now much more in my absence—continue to work out your salvation with fear and trembling, for it is God who works in you to will and to act in order to fulfill His good purpose.” (NIV)

1) Do all of the characters in the show have a purpose? Does Rick? Carol? Morgan?

2) Does the wolf captured by Morgan have a purpose? If so, what do you think it is?

3) What are there some things in life that I haven’t mentioned that give people meaning or purpose?

4) Are all temporary things that give people purpose bad? Explain?

5) How does a relationship with Jesus give your life meaning and purpose?