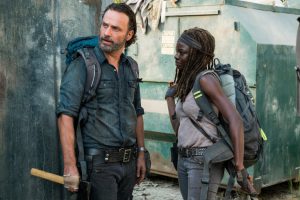 What will happen to the world when I am gone?

I know that it sounds like a pretty self-centered question, but I am willing to bet that most of you have asked this question too. Is my contribution to the world going to be missed when I die? Is there anything that I do that is essential to keep the world running?

But the reality is that I know that when I do die, the world is going to be just fine. I am a pastor, so a lot of people would come to my funeral, but my guess is that people’s lives would go back to normal pretty soon afterwards. Even though this sounds a little bleak, I know it is true. I am just not really all that important when it comes down to it.

But what about “important” people: leaders, artists, philanthropists or great thinkers?

Many people say 2016 was an unusual year for untimely deaths of famous people – in January, we sure heard a lot of coverage on the news about different celebrity deaths. It seems like the “in memoriam” lists were a lot longer in 2016. But here we are just a couple of months later, and we don’t really hear a lot about most of them. As a matter of fact, I wonder if in five years, we will still be talking about any of them.

Tonight on TWD, this is the very serious question that Rick is asking. While he and Michonne are on their awesome scouting – gathering vacation (and eating chili and mac-n-cheese) we see that Rick is having a hard time sleeping. But it isn’t until they are driving with a van full of loot that he shares his thoughts with Michonne.

Rick: I haven’t been sleeping. Thinking about what we lost. Thinking about my friends. Glenn saved me – right at the start. I couldn’t save him. It’s normal. I know that. [Sighs] Being stuck on it. We went through something. This — This doesn’t cure it.

Rick: [Breathes deeply] We’re gonna fight them. That’s what happens next. And we’re gonna lose people, maybe a lot of them, maybe even each other. Even then, it’ll be worth it.

Michonne: When I thought that… [She pauses] I can’t lose you.

Rick: You asked me what kind of life we had just surrendering. It wasn’t — It wasn’t a life. What we did back there, what we’re doing now, making a future for Judith and for Glenn and Maggie’s baby, fighting the fight, that’s living. You showed me that. You can lose me.

Rick: Yes, you can. I can lose you. [Sniffles] We can lose our friends, people we love. It’s not about us anymore. It’s about a future. And if it’s me who doesn’t make it, you’re gonna have to lead the others forward because you’re the one who can.

Michonne: But how do you know?

Rick: Because you led me here.

In this very important conversation, Rick points out something that he has never expressed before. Rick doesn’t talk about his feelings much, so it is probably a good thing to listen when he does. (My guess is that he does it because he feels safe with Michonne.) But he takes this opportunity to reflect on the meaning of his existence in the world, and it is very disturbing to her. Remember that just before this conversation, she thought that she lost Rick. Now she is wondering if she can go on without him. So these existential questions are very timely for both of them.

But what Rick says rings true on this show. Think of all of the people who have died. Some of them were essential members of this team. Remember Lori? Shane? T-Dog? Andrea? Hershel? Even Merle? I could name so many more. (The horse!)

The simple fact is that Rick is right. It isn’t just about them anymore. He knows that there is a larger good happening around them and that contributing toward that is more important than even their own lives. He especially understands that it is important for the little ones like his (possible) daughter Judith, and Glenn and Maggie’s baby who will have to grow up in this world. Even though Michonne doesn’t like this, I am afraid that she knows this is true – the decisions that they make now are more important than the individuals who make them.

About five years ago, the founding pastor at our church left to take a job at another church on the east coast. I was an associate pastor at the time and shortly thereafter I was asked to take over as senior pastor of our church here in Northern California. He was a great leader and my mentor, so I was extremely nervous about this. I guess that I was afraid that our congregation wouldn’t be able to recover from such a devastating departure. And for the first couple of years, it was really tough. I constantly felt the pressure to be more like him or to do things the way that he did.

But then a funny thing happened. After a while, many people started to forget about him. I stopped hearing the phrase, “but we used to do it this way.” And here we are five years later and I almost never hear his name. As a matter of fact, two weeks ago, we had a new-members class and not a single person in the class had even heard of our former pastor.

Do you know what I realized right then and there? I realized that when I retire someday, the exact same thing will happen with me. It just doesn’t take long for people to move on when we leave. The truth is that none of this is actually about us. Our last pastor had an amazing ministry here, but because he spent more time getting people to focus on Jesus they were able to continue this process long after he was gone. I try to do the same.

Probably one of my favorite stories in the Bible about this concerns the great Old Testament leader Joshua. Most of us remember stories from Sunday school about him fighting the battle of Jericho and leading Israel into the promised land. But often we forget that he had the very difficult job of replacing Moses.

Imagine finding out that you were going to be the one to replace the guy who freed Israel from slavery, brought the Word of God down from the mountain and wrote the Torah. Joshua had some pretty big shoes to fill – arguably some of the biggest ones of any character in the whole Bible. But God called Joshua to do this, and he was able to step up and fill those giant shoes. Take a look at a few verses in Deuteronomy chapter thirty one.

When Moses had finished giving these instructions to all the people of Israel, 2 he said, “I am now 120 years old, and I am no longer able to lead you. The Lord has told me, ‘You will not cross the Jordan River.’ 3 But the Lord your God Himself will cross over ahead of you. He will destroy the nations living there, and you will take possession of their land. Joshua will lead you across the river, just as the Lord promised. (Deuteronomy 31:1-3, NLT)

Imagine that you are one of the people hearing this announcement from the guy who led you out of Egypt. This news is coming from the guy who met God in the form of a burning bush and stood up to Pharaoh, the most powerful man in the world. You would probably think that you weren’t hearing this correctly. Couldn’t God just let Moses live a few more years and lead them into the promised land? And who was this Joshua guy? What gave him the qualifications to lead them? My guess is that Joshua probably had these very same questions. But God wanted it this way, and before long, Israel got over Moses and accepted Joshua. Eventually they entered the Promised Land and even Joshua would pass the baton on to the next person.

Here we are thousands of years later, and many of us forget that we are just small players in God’s ultimate plan. We all have important roles to play in what God is doing, but hopefully we never forget that it is God who is doing it. When I preach a sermon, I pray that it gets people to look at God instead of saying, “Wow, Thom sure can preach.” Or when God does something miraculous, like intervening in and transforming people’s lives, hopefully we see that it is God at work, not our own efforts. God is in charge and the one who deserves all the praise – this is His world, and the part we play in it is of His design and should be for His glory.

1) Michonne and Rick seem to be having fun while they are on their mission. Michonne calls it “fighting the fight.” Why do you think she labels what they are doing that way?

2) Rick keeps asking Michonne if they can stay a few more days on their mission? Why do you think that he keeps talking to her about that?

3) Tara seems adamant about keeping Oceanside a secret even though they have much needed guns and could possibly be a powerful ally against Negan. Why do you think that she won’t tell anyone (except for Judith of course)?

4) Rosita accuses father Gabriel of meddling. Do you think that is what he is doing?

5) Why do you think Rick and Michonne laugh when they fall through the roof? What does it say about them and their relationship?

6) Do you think that Tara should tell Rick about Oceanside? Why or why not?

7) What do you think that Rick means when he tells Michonne, “It’s not about us anymore”? Do you agree with this? Why or why not?

8) Have you ever seen someone try to take credit for something that God is obviously doing? Have you ever done this? Talk about that.

9) What kinds of things can you do to help remember that everything is always not about us as individuals?

10) What does being part of the family of God mean about us as individuals?

11) Does being a Christian mean that God won’t be able to do what He does without us? Why or why not?