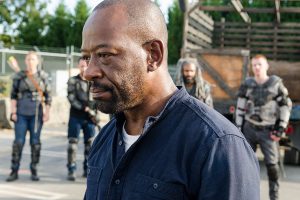 Have you ever made a decision that was hard to live with? I mean the type of mistake that kept you up at night. The kind of decision where you would give almost anything to have the opportunity for a do over. Most of us, at some point in our lives, have encountered this.

Living with guilt is something that most sane and rational people have had to deal with at one time or another. But it is figuring out what to do with guilt that really separates the genuinely happy people from the miserable ones.

On Season Seven, Episode 13 of TWD, we see two characters who are carrying around tons of guilt – Morgan and Richard. Both of them have lost tons of people that they love, but the thing that tortures both of them is the fact that they have both lost children.

We already knew about this with Morgan, and we were reminded of this when he accidently referred to Benjamin (his new surrogate son) as his own dead son Duane. After tonight, Morgan is carrying the guilt of the death of both of these boys. But what we discover tonight that we didn’t know before is that Richard also lost a child in the past. In a conversation with Morgan, he talks about this horrible loss.

Richard: I was in a camp when it started. It was a huge endless city of — of tarps and latrines and wood smoke and babies crying. There were always babies crying. I knew they had problems, but I didn’t think they were mine to solve. I thought there were stronger or smarter people there than me. W-Who the h*** am I, right? So I did nothing. A-And there was a fight and a fire. And I lost my wife. And after three days of running, no food, and no sleep of horror and terror, I lost my little girl. Right in front of me because I didn’t do something. Because I waited.

Later we realize that the place where Richard wants to be buried is most likely the place where he watched his daughter die. And the guilt that he feels comes from the fact that he didn’t do something that he needed to do. He doesn’t say what that was, but we have seen it happen so many times on this show that we don’t have to use a lot of imagination to picture it.

My little girl turns nine tomorrow, and so the scene with the backpack was a little hard for me to watch. There is almost nothing in this world that is more horrifying to me than having to watch my daughter hurt. And if for some reason, I felt like her suffering was my fault, due to action or inaction, I imagine it would be the hardest thing in the world to deal with.

I know from experience that guilt is something you can’t just carry around hoping that it will just go away. Guilt has a nasty habit of eating us alive from the inside if we don’t deal with it in some way. The problem is that people disagree on what the best way to deal with guilt is. Some people have found comfort in therapy or getting some psychological help. Others have found help with the aid of anti-depressants or other medications. Many people will say that finding others who have suffered in similar ways and talking about it is very helpful. And I have known people who have found enormous help in one of more of these ways. But in my life, there has been nothing to help me deal with guilt more than looking to God for comfort and forgiveness.

One of my favorite passages of scripture about this comes in Psalm 32. This is actually my favorite Psalm. It was written many years before Jesus’ time on earth by a distant relative of His named David, but it is surprising how much of this Psalm contains the gospel. It was written by David after he did something really bad. We don’t know which incident that David did that he is feeling guilty about, but if you look at the life of David, there are quite a few to choose from. Perhaps he wrote this after killing Uriah, the husband of a woman David had gotten pregnant. We don’t know exactly when he wrote this, but we know enough about him to know that he must have carried tremendous guilt.

Oh, what joy for those
whose disobedience is forgiven,
whose sin is put out of sight!
2 Yes, what joy for those
whose record the Lord has cleared of guilt,
whose lives are lived in complete honesty!
3 When I refused to confess my sin,
my body wasted away,
and I groaned all day long.
4 Day and night your hand of discipline was heavy on me.
My strength evaporated like water in the summer heat. Interlude

5 Finally, I confessed all my sins to you
and stopped trying to hide my guilt.
I said to myself, “I will confess my rebellion to the Lord.”
And you forgave me! All my guilt is gone. (Psalm 32:1-5, NLT)

The poem begins with David talking about how guilt is eating him up from the inside. Most of us know what this feels like and his imagery is strikingly familiar to what many of us feel. Many of us know what it is like to groan all day long and feel like our body is wasting away. The picture of our strength evaporating “like water in the summer heat” is probably one of the best descriptions I have ever heard about what this feels like. But then when David says, “I confessed all my sins to You,” we realize that this is a poem written to God. It is a confessional poem to God about the process of dealing with guilt over something terrible that David has done. What is the thing in this Psalm that David says helps him get rid of his guilt? He says that he stops trying to hide his guilt and then uses a word that may have lost a little of its impact in our culture. He uses the word “confession.”

Now I grew up as a protestant Christian, and so confession was a word that just wasn’t a huge part of our tradition. Sure, we gave a little lip service to it, but when it really came down to it, it wasn’t something that we focused on that much. But David says something very important about it here. He says that the result of this act is the fact that we can live our lives in complete honesty (vs. 2). And more importantly, he says that this is what brings “joy” (vs 2).

Confessing our sins to God brings us the joy of being able to live honestly. And let’s face it, when we live honest lives, it is so much easier. There’s no scrounging for the lie, or trying to remember the story you told before, or who you had told it to. Jesus wants us to live honest and open lives because it is freeing. Why does it work this way? Look at verse five. “I will confess my rebellion to the Lord. And you forgave me! All my guilt is gone.” The reason this works is because God forgives us when we confess our sins to Him. That is who He is and that is His nature now, in the past and in the future.

When I read this Psalm, I am astounded that this is in the Old Testament. This principle isn’t just a principle that we find in the teachings of Jesus. It also isn’t confined to the letters of Paul where emphasized the grace that we find through the work of Christ. This is a Psalm written long before the New Testament books were written, and it illustrates to me that this is a reality that has always existed and always will. Freedom from guilt comes from living honestly and confessing our sins to God, knowing that He loves us and died for us to forgive us.

I don’t know about you, but this is very good news for me (remember that the word gospel means “good news”). I have tried many times in my life to deal with guilt by just burying it deep inside my soul. For me, this has never worked. It always comes out eventually, and then the only way I can deal with it is to rationalize and lie to myself about what I have done. And those of you who have done this know what being dishonest with yourself and God can ultimately do to you. It can tear you apart. And it can wreak havoc on relationships around you. The good news here for me is the fact that we have a God who wants us to be honest with Him about even the worst things we have done (which He already knows about anyway). When we trust God enough to confess to Him, He shows Himself to be a gracious and forgiving God, and brings comfort and encouragement. This is what it is for Christians to experience the freedom and joy of living an honest life that is dependent on God. That is good news indeed.

1) When Morgan accidently calls Benjamin ‘Duane,’ he seems really flustered. Why do you think he called Benjamin the name of his son?

3) Why do you think Morgan kills Richard?

4) Why do you think that no one steps in to stop Morgan when he is choking Richard?

5) Why do you think that Morgan confesses the truth about Abraham and Glenn to Carol?

6) Almost every character on TWD is carrying around guilt for something. Morgan seems to be dealing with it now by becoming a pacifist? Do you think that this worked for him? Why or why not?

7) What kind of guilt have you carried around with you in the past, or perhaps even now? What did it do to your attitude?

8) Can you relate to David’s imagery about guilt in Psalm 32? What is your favorite image that he creates in the Psalm? Why?

9) Have you ever confessed your sins to God? What happened?

10) David says that the process of being honest with God leads to joy. Have you ever experienced that kind of joy? If not, are you willing to take David’s advice and try to be honest with God?