Season Seven, Episode Fourteen, The Other Side 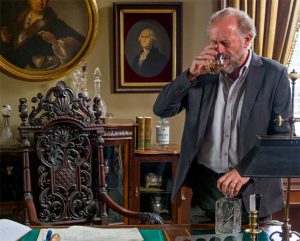 Years ago, a friend of mine who was a recovering alcoholic told me that addiction was like a full time job. He said that nothing else was a bigger priority than making sure that he could get drunk that day – not his job, his daily responsibilities or even his family. Everything in his life was consumed with acquiring and drinking alcohol. Eventually, the only thing left in his life was his addiction, as he lost his job, most of his friends and his family.

Tonight on TWD I couldn’t help but think about my old friend when we saw what was happening with Gregory. It was already pretty clear that the man is an alcoholic. Back in episode five of this season, Jesus tricked Gregory into losing some of his alcohol to the saviors and he watched his confiscated booze get carried away like he was losing his firstborn child. Tonight, we see him pour a small portion of gin into a glass while his near empty bottle sits on the counter behind him. He is almost out of booze and it is a major problem for him. He may even see it as his biggest problem right now.

When Simon greets Gregory downstairs, it is very obvious that Simon knows that Gregory is an alcoholic and he uses that to manipulate him.

Simon: Right back at you, Gregory.Hello.

Gregory: Ahh. [Both laugh] We weren’t, uh, expecting you back so soon. You want to talk in my office? I got a bottle of gin my people found. You’re a gin man, right?

Gregory: You know what? I respect that. Yeah. Tequila. (points to his brain) Mental note. Locked.

Later in the episode, Simon tells Gregory that he can come report insubordination to him directly and that he might even open a bottle of tequila for him if he does. This is like cheese in a mousetrap for Gregory. Then, at the end of the episode, when we see Gregory with a bottle of tequila, we wonder if he may have already reported some secrets to the saviors in order to obtain his precious liquid.

Most of the audience has probably already figured out that Gregory is a slimy little weasel. But now it seems a little clearer as to why. Gregory is an addict, and when he is running out of his alcohol he is becoming a desperate man. Soon he may actually be drinking turpentine if things don’t turn around for him. But most importantly, he is a very dangerous man and his addiction is probably going to get some people killed including himself. Those of you who have known addicts in your life recognize this behavior very quickly when you see it. It reminds me of the old joke, how do you know when an addict is lying?… His lips are moving.

When you or someone that you love is an addict, it can literally destroy the world around you. I know this from first experience in my family. My wife’s brother, who was about ten years younger than me, died over four years ago because of his addiction to alcohol and drugs. His death was one of the most painful things that I have ever gone through, but dealing with him while he was alive was a close second. He always needed to get drunk or high, and he just wasn’t going to let anyone get in the way of that. He eventually ended up sacrificing most of his employment, his marriage and his family because of his addiction.

Now don’t misunderstand me, I am no teetotaler (someone who doesn’t drink alcohol ever). My wife and I like good wine or a nice ale, and we are known to have a glass about once or twice a month. Part of it is that we want to teach our kids what responsible drinking looks like. The other part is that we are lucky that we aren’t driven to drink more when we do (like Amy’s brother was). But, I can honestly say that I have seen so much destruction that addiction has caused, that it wouldn’t make me sad at all if both of my kids decided never to drink alcohol, even moderately.

Like so many issues, the bible actually has a quite nuanced view when it comes to alcohol consumption. It is pretty clear to me that Jesus drank alcohol, and even if he didn’t, his first miracle at Cana proved that he at least knew good wine from the bad stuff. I joke with my wife that I am sure that the water that he turned into wine was most likely a full bodied Pinot Noir (just my Northern California influenced opinion). Paul also advocates that Timothy should use it for medicinal purposes (1 Tim 5:23). And we shouldn’t forget that one of the most sacred Christian rituals that Jesus Himself asked us to participate in involves drinking wine in remembrance of His sacrifice for us. (Yes I am aware that some people think that it was grape juice, but if you believe that, you probably aren’t reading this because you probably also don’t watch The Walking Dead)

However, the bible also clearly warns about the dangers of alcohol. The New Testament prohibits drunkenness and warns about all of the problems that it can lead to including debauchery and paganism (1 Peter 4:3, Ephesians 5:18, Romans 13:13). There are also quite a few examples of people getting drunk and doing completely stupid things throughout the scriptures (remember Noah in Genesis 9 or Lot in Genesis 19?). But some of the most interesting discussions about the dangers of addiction can be found in the wisdom literature. One of my favorites is in Proverbs 23.

Who has anguish? Who has sorrow?
Who is always fighting? Who is always complaining?
Who has unnecessary bruises? Who has bloodshot eyes?
30 It is the one who spends long hours in the taverns,
trying out new drinks.
31 Don’t gaze at the wine, seeing how red it is,
how it sparkles in the cup, how smoothly it goes down.
32 For in the end it bites like a poisonous snake;
it stings like a viper.
33 You will see hallucinations,
and you will say crazy things.
34 You will stagger like a sailor tossed at sea,
clinging to a swaying mast.
35 And you will say, “They hit me, but I didn’t feel it.
I didn’t even know it when they beat me up.
When will I wake up
so I can look for another drink?” (Proverbs 23:29-35, NLT)

Doesn’t this passage almost perfectly describe someone like Gregory? I can easily imagine him saying “when will I wake up so I can look for another drink?”

The reason that this passage serves as such a perfect warning about the dangers of addiction is that is gives an excellent preview for the life to come for the addict. They will hallucinate and say crazy things. They will spend most of their time in the taverns staring at their glasses. Then they will stagger around like a sailor in rough seas even though the ground is perfectly stable. They are always looking for fights and they wake up with mysterious bruises and bloodshot eyes. It even says that they are always complaining and full of anguish.

Does this remind you of anyone you know (besides Gregory)? If you have known any addicts you will see remarkable wisdom in the descriptions in this Proverb (maybe that is why they call it “wisdom literature”). You see, this Proverb is pointing out that addiction will ultimately become a force in your life that will take over everything that is most precious, your clarity, your ability to interpret events, your ability to communicate, your attitude, your judgment and especially your health. Basically, it makes you completely untrustworthy and unreliable. This is exactly why addicts typically lose their work and most of their relationships.

In Ephesians 5:18 Paul warns a first century church about drunkenness, but he says something very interesting about why they should worry about it. He says that instead of being drunk that they should “be filled with the Holy Spirit”. While I don’t believe that being filled with the Holy Spirit is like being drunk, I do think that Paul is saying something important about addiction here. I believe he is saying believers can find ultimate joy and meaning in our connection to God, while drunkenness can get in the way of that. In other words, addiction cannot only ruin your human duties, responsibilities and relationships, but it can get in the way of your relationship with God.

1) Do you agree with me that Gregory is addicted to alcohol? Why or why not?

2) How do you think Gregory’s alcohol consumption is affecting his ability to lead?

3) Do you think that Gregory would be more trustworthy if he didn’t drink so much? Why or why not?

4) Do you think Jesus (the character on the show) knew that Gregory would do better without his booze when he hid the alcohol in the closet in season 7 episode 5?

5) Do the saviors have an advantage over Gregory because of his drinking? Why or why not?

6) Have you known people in your life whose lives have been ruined because of addiction? What happened?

7) How do you think God feels when He sees people’s lives being destroyed by alcohol or drugs?

8) What are some steps that you can take to make sure that addiction doesn’t take control of your life?