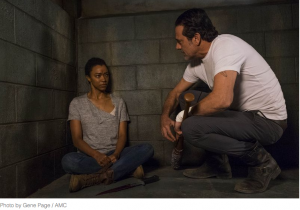 Have you ever been betrayed by someone you trust? Maybe this was a person that you could have never predicted would do this – a parent, a family member, a pastor or one of your closest friends. Or maybe even you have betrayed someone who trusted you. Chances are, if this happened to you (or if you have done this), it may be hard for you to trust people or to watch people trust others.

While I was watching TWD tonight, I was amazed at how many people were betraying other people’s trust. First you have Tara, who has broken her most solemn promise to not tell anyone about Oceanside. Or you have Gregory, who may be selling out his people (our discussion about that from last week). Even though Gregory didn’t kill Maggie when he had the chance, you can still see that he is conflicted. Or what about Dwight? Is he finally betraying Negan now, or is this just a plot to see what Rick and company are up to? Sasha is being primed by Negan to betray her group, even though it seems clear that she is a long way away from doing that. But I get the feeling that Negan has probably converted a lot of Sashas in his day. Or most importantly, what about Eugene? Is he really fully on board with Negan? (Our discussion about that) His conversation with Sasha in her cell was so telling.

Sasha: What did they do to you?

Eugene: They’re keepin’ me safe. I brought you some creature comforts. Full disclosure, the pillow is not hypoallergenic. There was some debate as to whether or not I should come in here. They said in the event of a hostage situation with the pig sticker that I would fully be on my own. Just wanted to share that. Negan relayed to me his offer to you. It’s my opinion that you should accept said offer, just as I did. I know it’s a hold-your-nose situation, but taking up with the management here was indeed the correct select. You know, I believed I could be brave, that I could be a survivor like Abraham was, and ridin’ that RV into the sunset was some of the greatest 37 minutes of my existence. But I know now that I was full-tilt delusional. I have never in my life been as scared as I was that night in the woods, kit to the grit, fully believing my number’s about to be called, then seeing it happen to someone brave to a survivor. And then the pants-p***ing terror of the rinse and repeat of that very same event — I just I couldn’t. Being here means I’ll never have to again. And neither will you if you just say “yes. ” Please say “yes.” He would want you to. [he thinks about it, and reconsiders] He wouldn’t. I do. We’re still here. Things have changed. We can change with ’em. We have to.

Last week I wondered if Eugene was just faking it. He had his “grimbly gunk” (sock monkey) hanging out of his pocket suspiciously and I wondered what he was hiding in there. He also must be pretty torn up about Abraham and Glenn. But this week, he sure looked like he is now fully in with Negan. He certainly has convinced Sasha at this point that he is in betrayal mode, mostly because of his fear. And Eugene is all about fear.

Unfortunately, there just is no way for us to know who is betraying whom on this show that specializes in unpredictable twists and turns. But that is also part of the fun. After almost seven whole seasons we know better than to try to predict exactly what is going to happen. I actually can’t wait to see what is going to happen next week with the season finale!

As a pastor, I have been asked this question more times than I can count. And I almost always have the same response – people will fail you, God will not. I am not saying that people will always fail you, but it doesn’t take a lot of convincing to say that many people will. I am also not saying that God will always do everything that you want like some Santa Clause in the sky. He has never promised us that our life will be free of pain, poverty or loss. But that just illustrates my point all the more – whatever God promises us, He will deliver. He is completely trustworthy.

Take a look with me at this very important verse in the book of Deuteronomy.

9 Understand, therefore, that the Lord your God is indeed God. He is the faithful God who keeps his covenant for a thousand generations and lavishes his unfailing love on those who love him and obey his commands. (Deuteronomy 7:9, NLT)

This verse was given to God’s people at a time when Israel was still in the wilderness during the Exodus. At the time, people were prone to look to fake gods to help them out with their material needs. This was strictly forbidden and was even expressly written about in the Ten Commandments. But Israel was still tempted to worship these idols, so this verse was a reminder that idols aren’t trustworthy, God is. When God says something, you can trust it forever.

Notice what promises are made in this verse – faithfulness and love. While He isn’t promising fame, wealth and fortune, He is giving us something that we all need. No matter what circumstances we are going through, He loves us and will be there for us. He is also promising us that He is always trustworthy and will never betray us. Notice how long they say His word will last – “a thousand generations”. In the vernacular of the time, this meant that His covenant will never end. It means that God’s word is eternal, and it will never fail.

I don’t know about you, but to me, that is great news. Whenever I feel betrayed, I remember that even though people will fail me, God never will. When He says something, it is something that I can count on, not just now but forever.

1) Do you think Tara was right to break her promise to the people of Oceanside? Why or why not?

2) How do you think that this decision affects Tara’s trustworthiness?

3) Does it matter that Tara broke her promise for all the right reasons? Why or why not?

4) Should she have made the promise in the first place? Why or why not?

5) How do you think that they should deal with Dwight now that he is offering to help?

6) Do you think that Eugene is now working for Negan? Why or why not?

7) How do you think Sasha should respond to Eugene?

8) How would you respond to Eugene if you were in Sasha’s position?

9) What does it mean to you that God is completely trustworthy and that He will never betray you?

10) Does the idea that you can trust God change how you would react to others around you? Why or why not?