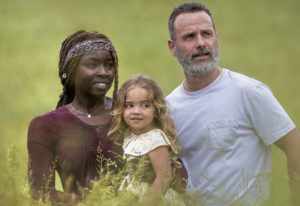 It has been a year and half in The Walking Dead world since the final battle with the Saviors, which is a great thing! Let’s be honest–Season 7 was boring and felt really forced. Season 8 was marginally better, but that part of the story was hard to get through as a consistent watcher. I am having high hopes for season 9 because I like a good story. A good story can be used to communicate truth and life lessons. If it is a true story, you can see the struggles that people involved had and how they did or did not overcome.

This episode of TWD was titled “A New Beginning.” The war is in the distant past and the groups are figuring out to live together. There are struggles to rebuild and provide food for each community, but Hilltop is thriving under the leadership of the democratically elected Maggie Rhee. The episode begins with Rick, Michonne, and Judith at their home in Alexandria. I was glad to hear Judith’s first words ever in The Walking Dead! It will be interesting to see what happens to her after the next time jump this season.

The three walked together in a field. They have no weapons and they seemingly have no fear being outside of the walls. I wonder if this will be probably one of the last peaceful times they have together as a family.

The second time I watched the episode (yeah, I’m that nerdy), I noticed how Maggie emphasized how she said murder to Gregory. “You can’t evenmurder someone right!” Lots of foreshowing this episode. Because of his arranging of the attack on Maggie, she had Gregory put to death by hanging… which was long overdue.

There were many different directions to discuss in this episode. The Maggie and Gregory situation had lots of content, Daryl’s disbelief in Rick’s leadership, or the fact that Washington D.C. has and will always been filled with a bunch of walkers. However, the thing that influenced every conversation and fueled every interaction was clearly seen at the Sanctuary, “Saviors Save Us. We are still Negan.”

In almost every scene of the episode, the events with Negan still are vividly lived by everyone. Rick thinks about his decision to keep Negan alive often, Maggie will not even visit Alexandria because he is there as made mention by both her and Gregory, Daryl speaks to time he was tortured at the Sanctuary, Daryl tells Cindy in the museum that he had friends that would be here and fight along side him but they didn’t make it. Rick mentions to Michonne that the Saviors do not want Negan, but they want food. She didn’t agree.

So much conflict. Such is life.

A new beginning is a great thing. It can also be very fearful. It is a change. It is a struggle. Just because it is newdoes not always mean it is easy. It may, in fact, be just the opposite. A new beginning might be the most difficult strides we ever take. However, it could also be one of the best things we could ever do. When creating change for a group of people, the leader is going to experience the fear, the struggle, and the hardship as an individual but then multiplied for the number of people they are leading. It takes a great visionary leader to keep casting the vision of hope and a better future for their followers.

On the flip side, the people Israel had food, shelter, and a sense of normalcy. Then one day, old man Moses comes back on the scene. It had been 40 years since they had last seen him. He comes strolling back with a plan to take everyone out of Egypt and bring them to a land flowing with milk and honey. But this is change. This is different from what this entire generation of Israelites knew.

You might know the story. Moses leads the people of Israel out of Egypt. They plunder the Egyptians as they go. They take a pit stop in the desert to receive the Ten Commandments. Moses takes them to a place called Kadesh. They fail to obey God due to fear of the large people in the land.

Because of their fear in Kadesh, they wander in the desert for 40 years, and the whole time they actually consider going back to their old spot, Egypt, under the oppression of Pharaoh, but where they were provided for with food, houses, and routine. It was fear that wanted them to go back.

Fear causes people to do irrational and immoral things. Fear can hide who you truly are or expose the realities of your current condition. Fear is first mentioned in the Bible after Adam hides from God in the garden because he was fearful. Fear causes people to break off relationships. Fear of being a nobody and being powerless caused Gregory to want to murder Maggie. Fear and hatred of Negan caused Maggie to cut relationship with Rick and the rest of Alexandria. Fear of failure and loss of control is why Rick is trying to appease everyone. Fear caused the Israelites to disobey God and desire the oppression of Pharaoh instead.

If you are a Christ follower, you have been given a new beginning in Christ. You only have one to fear and that is God the Father. Every day we are presented with our own Kadesh situation. It is our decision to choose fear or faith.

What is your Kadesh situation- the place where fear creeps in?

What is at the root of your fear?

Who can you partner with to encourage it respond in faith?

How can that individual help you?

Imagine, how does it feel to respond in obedience to God in faith?

What do you see as the outcome of responding in faith?