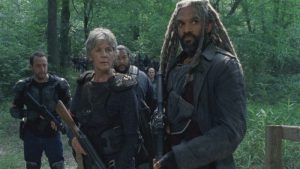 How much does fiction matter in the real world? Is there anything of value in these shows that we all watch which warrants so much discussion and debate?

Of course, as I write, I am taking a fictional show about walkers and discussing it in light of the truth of the Bible. Some people have criticized us for doing this, saying that we are mixing truth with untruth (Meanwhile, in the other room, my wife is writing a Biblical discussion for season two of Stranger Things). Obviously, we do think that there is some value in analyzing the culture that we live in and discovering how all of these ideas connect with our Christian faith. But the question is still valid – does untruth have any connection with truth at all?

While I have to admit that I really found tonight’s episode of TWD poorly written and very confusing, I still feel strongly that there is lots to discuss. Once again, this episode is exploring questions of mercy and revenge (a theme that this show has been covering for 8 seasons), especially in the scenes with Tara and Jesus. The show leaves us with all kinds of questions about leadership, fear, bravery and sacrifice. And probably most importantly, we are going to see characters dealing with things from the past that they have all forgotten about (anybody remember Morales from season one?).

But probably the thing that jumped out at me the most was the discussion about the role of fiction in this particular world of The Walking Dead. The scene begins when King Ezekiel, Carol and some other members of the Kingdom are chasing a guy who got away in an attempt to warn the Saviors about this current attack. As they are walking, Ezekiel starts to wax poetic to Carol, Shakespearean style.

Carol: Compound’s not far off. If he made it, if they know we’re coming, they’re gonna be ready.

Carol: And what’s that?

King Ezekiel: We shall be ready regardless.

Carol: What’s about to happen, it’s not just a few walkers. You know that, right?

King Ezekiel: Yes. And yet I smile.

King Ezekiel: Do I feel the supreme confidence? Or is my lot, my job, to simply protect such certainty? No and yes. Yes and no. And then finally yes to both. (leans in to Carol) Fake it till you make it, baby. That’s what I’ve done and what I do. I am King because I-I have provided a light to lead my people forward through the darkness, and they have made my fictions realities. So, with all this and everything that’s happened…

Carol: All of us may not make it. We may not even win.

King Ezekiel: And yet I smile. There will be no fantasies of failure this day.

While I couldn’t help but smile along with Carol about how ridiculous Ezekiel sounds, I flashed back to the scene when she first met him and giggled like a little school girl. Carol realized then that Ezekiel had created this giant fiction in this crazy world to help it make a little more sense. The word “cult” comes to mind when you see this, and I don’t think that this word is all that far off. What Ezekiel is saying is that this fiction that he has created of noble knights and medieval warriors has helped his people escape from the horrors of their predicament. But what he also seems to be implying is that truth doesn’t really matter in this world. All that matters is what people believe. And Ezekiel gives them something to believe in.

Unfortunately, this is a philosophy that is far too prevalent in our culture today. Fiction not only becomes an escape from reality, but has actually becomes a substitute for reality in many ways. I am not just talking about people who like to dress up as their favorite characters from The Walking Dead or Game of Thrones and spend their weekends role-playing. I see that as fairly harmless. A little pathetic, but harmless (with a few striking exceptions). What I am talking about is people who have taken this idea and stretched it to mean that truth is always relative. Or worse, that truth is whatever we believe in.

You may remember the age-old philosophical argument about a tree falling in the forest. If no one was there, did it make a sound? I remember arguing back in college that the real question there is about the elevated importance of our own presence. If a tree falls in the forest and I am not standing there, it still happened. And yes, it did make a sound regardless of my own absence. Somehow we think that if we weren’t there to witness something, it didn’t happen. Our culture teaches us that if you believe in something enough, it becomes real… or true.

I think that this is what Ezekiel is getting at here. In effect, he is saying that if his created fiction brings some hope to people, what is the harm? And I don’t see any harm in bringing fiction to people. I just think that there is a massive problem when you make fiction equal to truth in our culture.

You don’t have to look much further than social media to see the blending of truth and fiction. How many times have you seen the profile of a friend presented as truth when you know it is nothing more than fiction? As a pastor, I know a lot of the things about the personal lives, marriages and relationships of the people in our congregation and community. But in many cases, I am shocked at what pictures are painted on social media pages in ways that are much more fictional than this week’s episode of TWD. In the social media environment, perception is reality to many people. If your marriage is on the rocks, simply post a picture with smiling faces, and all is right in the universe (at least that’s what everyone else will think).

But as Christians, we should know better. We believe that there is a Creator God who loves us and desires true relationship with us. That is not fiction, and according to the scriptures, that truth brings us hope. Take a look at what Paul says in 1 Corinthians 15:

Paul makes an argument here that is actually fairly controversial and runs counter to what our culture teaches. He is saying that there is truth out there and that we can actually know that truth. He is also saying that the truth of the resurrection of Christ is what actually gives us hope. But most striking is that he says that if this stuff isn’t true, “we are more to be pitied than anyone in the world.” That is a strong statement about truth and fiction. As Christians, we can stand confidently knowing that we can know the truth and that the truth is what gives us hope. We don’t need to manufacture hope by manufacturing reality. What Paul is saying is that hope has been provided for us already through Jesus Christ. We just need to accept it as the free gift that it is. We don’t need to create a false truth when the Way, the Truth and the Life is inviting us into a real relationship right now.

1) Tara and Jesus seem to have very different philosophies about mercy and revenge in this episode. Which one do you agree with more? Why?

2) Should the Saviors just be executed during these battles, or should they be taken prisoner. Why or why not?

3) Did it surprise you that the Savior that fights Rick hand to hand was protecting a baby? Does that give us more information about the Saviors?

4) The last time we saw Morales, he was leaving Rick with his family in season one. What does it mean that Morales has joined the Saviors?

5) Does Rick’s past relationship with Morales have any bearing on their current predicament?

6) Do you think that Ezekiel’s fiction actually has encouraged people?

7) Do you think that the people of the Kingdom actually believe it?

8) What do you think that Carol thinks about Ezekiel and the Kingdom?

9) Do you think that Ezekiel believes in actual hope, or does he think believing in the fiction is all there is? Why or why not?

10) Paul says that if it wasn’t true that Jesus was raised from the dead that our faith was “useless.” What do you think that he meant by this?

11) How does the resurrection of Christ give you hope in difficult circumstances? How can you share that hope with others?