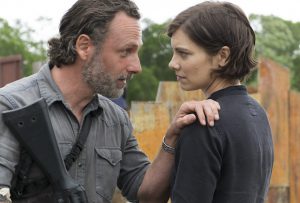 I honestly don’t know the answers to these questions in the context of this show. I am also not so sure that the writers on the show know what mercy means in this universe. But one thing that I do know is that this theme has been explored endlessly during the first ninety-nine episodes of the show? So when I saw that the 100th episode of this show was called “Mercy”, I have to admit, I was a little disappointed.

As a matter of fact, disappointment seemed to be the major theme of the night for me. I don’t know if everyone is going to agree with me here, but this episode just did not work for me. But maybe I am guilty of setting myself up for this let down.

We have been waiting for months to see how the show is going to handle one of the most interesting arcs in the comic book – “All Out War”. Greg Nicotero was directing the episode and Scott Gimple promised us that we would need seat belts on our couches for the first four episodes. So I was ready, minus the seatbelt, to see our heroes get their fight back. And even though there was lots of action in the episode, it still seemed like an incredible dud. It was as if Greg Nicotero lit a cherry bomb… and it just never went off. Many argue that we need to wait a couple of weeks for the payoff, but this was the 100th episode. I was expecting more.

I didn’t hate Season 7, like many people did, but I was very hopeful that we would see Rick get his fight back, Daryl get out of a cell, and Negan get his comeuppance in Season 8. Also, being the 100th episode, a major feat for a basic cable show, I was hoping for something very special. Unfortunately this just didn’t happen.

My disappointment was also compounded by the fact that recently I went back and re-watched Season One of The Walking Dead. If you haven’t re-watched Season One, I highly recommend it. You will immediately be jarred with how young the characters are and you will be reminded of some of the characters you have already forgotten (did you remember Carol’s husband?) Most of the characters are unrecognizable from their current status (both attitude and their haircuts). Also, humans are not really the biggest antagonists yet (the walkers are). But the biggest thing that you notice about Season One is how much happens in only six episodes. TWD packed more into those six episodes than in the 16 episodes of Season 7.

Many of you might know that Frank Darabont (director of The Shawshank Redemption and The Green Mile) was forced out after that season, but what we all forget is how much better the show was back then. There were no “one-off” episodes about single characters and most of the soap opera quality of the show hadn’t quite started yet. Also, it seemed like major characters died off a little quicker back then. Don’t get me wrong, I love the show, but I am worried that this show may have already “jumped the shark” by now (my brother Jonathan already voiced that not too long ago in this blog)… and tonight’s episode may have confirmed that for me.

Perhaps the biggest reminder of this came in the scene that was directly connected to the first episode in the first season of the show. The original scene showed Rick carrying a gas can walking among a group of cars and then he had to shoot the little girl zombie in bunny slippers. Imitating this scene shot for shot, Carl also walks among cars with a gas can and runs into someone new. But instead of seeing a little girl zombie, Carl runs into someone who may be a familiar character in the comics. While Carl is walking, he hears a voice talking.

Traveler: I-I’m okay. I mean I’m not, but I’ve been shot at. Someone threw a microwave at me. I-I’m just gonna say something my mom used to say and hope for the best here. “Whatever you have of good, spend on the traveler.” My mom said that — that helping the traveler, the person without a home — that’s everything. I’m sure you’ve seen things, been through things, that you don’t trust people. I get it. I get it. I don’t, either. I’ve been through things, too. My mom — she also said that, “May my mercy prevail over my wrath.” [Scoffs] It’s not all my mom. That — That one — That’s from the Quran. Probably shouldn’t have said that. I don’t even know you, but I ha– I haven’t eaten in a few days. You might not even be real.

Carl finally catches the source of the voice at gunpoint, but then Rick scares him away by shooting in the air. Carl wants to help the boy and is disappointed in his Dad’s actions. But what really jumps out at us is how confusing Rick’s character arc is. In episode one, we are all shocked that he is able to put down a little girl so quickly. Of course she is a walker, but the scene is designed to remind us how this world is going to change Rick. And after 7 seasons, Rick has changed a lot. But how or why, it is really hard to tell right now. Sure there was a future Rick lying in bed listening to Weird Al’s song “Another One Rides The Bus” living in a more hopeful world. Here he also quotes the Quran about mercy and wrath. But we have no idea whether this is real or just a crazy fantasy ala Lost.

The speech by the traveler is interesting and he is certainly trying to appeal to Carl’s mercy and hospitality. Later in the episode, we see that it works because Carl leaves him some cans of food, but we have no idea what Rick is thinking. He shows the kid mercy even though he obviously could be one of Negan’s guys. But even if the scene is demonstrating the value of mercy, later we see mercy not paying off when Gabriel helps out Gregory and then Gregory leaves him in the dust.

Just what is the show saying about mercy here? Is it just saying that mercy is more complicated in a zombie apocalypse? Or is it saying that mercy really should have no place in this world? I honestly cannot say if there is a consistent view on “mercy” in the writing of this show. Sometimes mercy becomes valuable for the group; but other times, mercy gets people killed. I do know that I have written about this many times because it is one of the big themes on the show. They just don’t seem to know what they think about it.

However, the Bible isn’t wishy washy about this issue. Much of the Bible was written in times where there was much violence and bloodshed, but there is still a very strong case for mercy in almost every situation. Why is that? Because according to the Bible, we are to be merciful because God is merciful. Jesus Himself could not make Himself clearer.

…love your enemies, do good to them, and lend to them without expecting to get anything back. Then your reward will be great, and you will be children of the Most High, because he is kind to the ungrateful and wicked. Be merciful, just as your Father is merciful.

Notice that He doesn’t say to be merciful only when others show you mercy. What He says is incredibly profound. He says that we are to be merciful because God is merciful (Yes, even the Old Testament God. Take a peek at the Jonah story, for example, when God spared the wicked nation of Nineveh when they repented. Note Jonah’s hilarious complaint when God showed mercy (“I knew you were a merciful and compassionate God…”).

We are God’s children and He has shown us incredible mercy regardless of whether we deserve it or not. This is the reason why we are to show mercy to others.

Hopefully we will see TWD figure out its point of view a little better in the future, but if you want to see how this discussion could be better explored, I strongly recommend that you read Jonathan’s book The Zombie Apocalypse Guide for Teenagers. There you will see a much better and morally consistent discussion of this very important issue.

1) What do you think the flash-forward sequence at the beginning is? Is it real or just a dream?

2) Do you think that the traveler is one of Negan’s guys or do you think we have met a new character? If so, why do you think he is talking about mercy prevailing over wrath?

3) When Rick repeats the quote, “My mercy prevails over my wrath,” what do you think he means?

5) Why does Rick say, “after this I’m following you” to Maggie? Do you think he was serious? What do you think that this means for their future?

6) Do you think that Rick is serious about showing the rest of Negan’s guys mercy if they surrender? Why or why not?

7) Should Gabriel have shown Gregory mercy? What would the Bible say about that?

8) Do you think that the amount of peril you are in should determine how much mercy you show? What does the Bible say about that?

9) In Luke 6, what reward do you think Jesus is talking about? Does that change your mind about mercy?

10) Have you ever done something that you believe makes you undeserving of mercy? Why or why not?

11) Is there someone in your life who you don’t think deserves mercy? What do you think that Jesus would say to you about that?

12) In what ways has Jesus shown you mercy? Did you do anything to deserve it?