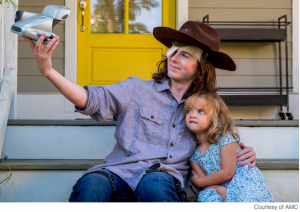 Who are the walking dead? Is it just the walkers? The title seems simple enough, but I am not sure that it is only referring to the hoards of zombies who threaten and kill these characters every week. There are just so many possible interpretations. Are the walking dead, the living whose survival skills (or lack thereof) are eventually going to get them killed? Or are they the ones who have been gravely injured and will be dead in a matter of days? Or perhaps, the walking dead were the people alive before the zombie apocalypse who knew nothing of the impending doom that they were about to face?

One very old theory is that “The Walking Dead” is referring to the audience and/or readers of the comics and show. Are we the ones who are so distracted by our own amusement in this world that we forget about our own impending deaths? This was certainly a major theme in George Romero’s work (he did invent the genre after all).

I am not entirely sure if I ascribe to any single one of these theories, but to me it is more likely that most, if not all of these theories are somewhat true. And tonight’s episode certainly dealt with this question… who are the walking dead?

But this week, there is no question that the show explored this theme. The prisoners at Hilltop might be dead men walking as they await their possible executions. Or the Alexandrians on the bus running for their lives may be headed for certain doom. Is Gabriel just a dead man filled with dreams of rescue as he heads for Hilltop? The saviors who captured Ezekiel were certainly “walking dead” when Carol and Morgan decided to rescue him. Or most importantly, what about Carl? Now that we have known from the season 8 mid-season finale that Carl has been bitten, is he now the walking dead? So far on the show, a bite has always been fatal.

Now I do have to admit that I thought the show might have been messing with us about Carl’s bite. They have lied to us before (remember Glenn under the dumpster?). I believed there was a chance that they might do some weird business about Carl being cured, or the bite not being from a walker. But tonight we learned that this certainly was not the case. Carl was bitten by a walker while trying to save Siddiq and he was indeed buried tonight. Comic readers will point out that Carl had a lot more to do in the comics and that this was definitely an early departure. But, there is no question now that the show has killed the character off and actor Chandler Riggs is now officially off the cast.

But tonight, the show really gave us a glimpse into what went through a major character’s mind during the few days that he had left on this earth… while he was a dead man, still walking.

First, we saw him write letters to everyone he cared about. I am sure that we will see what is in those letters in the weeks to come. He also took the time to play with and say goodbye to his little sister who may or may not be old enough to remember him. Then we got to see a little of the preparation he put into his plan to save the inhabitants of Alexandria (a plan that worked beautifully too).

But probably the most moving part was his last conversation with his own father, Rick. During the first half of the season, we have seen these dream sequences with Rick living peacefully with Michonne, Judith and a few others in what looks like the future. Tonight we learned that these dreams have been Carl’s vision of one possible future. Of course the new information in these dreams tonight were the inclusion of Eugene and a Rick-look-a-like Negan living peacefully with our heroes in the future. We don’t know if this will actually happen, but it is definitely Carl’s dream and wish about the future. And he shares this vision with his dad and Michonne as he is lying on his death bed.

Carl: I know you can’t see it yet… how it could be. But I have. You have a beard.It’s It’s bigger and grayer. Michonne’s happy. Judith is older, and she’s listening to the songs that I used to before. Alexandria’s bigger. There’s new houses, crops and people working. Everybody living… helping everybody else live. If you can still be who you were that’s how it could be. It could.

It turns out that these are Carl’s last words to his father. We also see that this positive vision of the future is very important to Carl. He even believes in a possible future peace with Negan and the saviors. Rick is completely understandably devastated because protecting Carl has been the primary motivation for Rick since season one of the show. But tonight Rick has to do what no father ever wants to have to do – bury his son. The question is, will Carl’s influence last with Rick and the characters on our show? (and will Rick’s beard truly age seven degrees greyer in just a couple years?)Unfortunately, I believe that the show’s taking Rick’s primary motivation away may be a big mistake. They certainly are going to have to find another purpose for Rick, and they are going to have to do it quickly before the ratings continue plummeting. They have already announced the hiring of a new show runner for next season, but I am afraid that this may just be too late. Our formerly brilliant and entertaining show may just be “walking dead” right now.

One of the unique things about Carl’s death tonight is the fact that, unlike many people on the show, he has some time to process and prepare for his own death. He has time to prepare a plan for Alexandria. He has a chance to confront Negan directly without a lot of fear as to what Negan can do to him. And most importantly, he gets a chance to say goodbye to his loved ones. This is arguably the best part about knowing that you are going to die ahead of time.

When I think about it, this is not unlike what Jesus went through at the end of the gospels. All four gospels include accounts of Jesus taking time to spend with his disciples before His own death. The most prominent story about this is when Jesus celebrates Passover with His twelve closest friends and followers. We call it the last supper.

But when you look carefully at the story of Jesus, you see that this celebration isn’t the last time that he spends with His disciples. Neither is their subsequent trip outdoors where He is arrested after the meal. It doesn’t even happen at his trial or execution, it actually happens much later. Most people forget that Jesus final words to His disciples (minus Judas) actually happen at the beginning of the first chapter of Acts about a month after events at the end of the gospels.

Jesus’ last words to His disciples occur after He has risen from the dead and appeared to more than 500 witnesses (according to Paul in 1 Cor 15). The text tells us that He is about to ascend into heaven and he says the following last words:

…you will be my witnesses, telling people about me everywhere—in Jerusalem, throughout Judea, in Samaria, and to the ends of the earth.

These are His last recorded words to anyone on earth and I believe that means that this message is extremely important. Most people say the most crucial thing that they can think of when they are about to go away for a very long time. In this case, I believe that Jesus is saying something all of us should listen very carefully to.

Like Carl, Jesus has a vision of hope for the future. But Jesus’ vision isn’t a fantasy about the earthly lives of His friends. Jesus has already risen from the dead, arguably the most important thing that anyone has done … ever. And here He is telling the disciples that they are not to keep this information quiet. He is telling them that they need to be witnesses for Him around the whole world. And if we look carefully at the context of the passage, I believe that this message is for all of Jesus’ followers. What He is saying is that the death and resurrection of Jesus is something that needs to be talked about by all Christians. It is something that needs to be shared with everyone, everywhere until Jesus comes back which could be a long time in the future (it was for the disciples).

Jesus last words were not just good news for the few that knew him on earth. His last words to His disciples were to talk about Jesus to everyone, because the message is for everyone. Jesus’ view of hope for the future not only is for our lives here while we are alive, but also in eternity where we will reside with Him forever. That is an amazing message and we should all take his last words seriously. And that message needs to continue to be told around the world.

1) Young Henry is about the same age Carl was at the beginning of the show. Henry also has taken his first human life. What should Henry learn from what has happened to Carl over the years?

2) If Carl was to be able to talk to Henry, what do you think that he would say?

3) Do you think that Carl would have said to Negan what he said if he didn’t know that he was already going to die?
4) This is probably the worst thing that has happened to Rick since the death of his wife. What would you say to him if you were Carl?

5) What do you think that those around Rick should say to him now that he has lost his son? Is there anything that they can say that would help?

6) Do you think that Jesus last words were important to Him? Why or why not?

7) Do you think that the disciples should take His words seriously?

8) What does it mean to you that Jesus died and rose again? If you aren’t sure, have you read the story at the end of each of the gospels (Matthew, Mark, Luke and John)?

9) Jesus wanted his followers to send this message to the ends of the earth. Do you think that Jesus was being clear about how many people need this message? Why or why not?

By Jonathan McKee 0 Comments
Share
Tags: Carl, death, death of a loved one, The Walking Dead