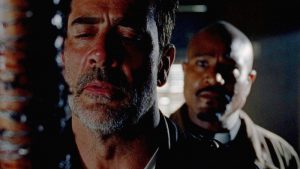 Does how you die really matter?

How about how you live?

Let’s face it, death is a horrible thing that happens to all of us. But I have done enough funerals to know that some deaths are much worse than others. Usually, the younger the person is, the harder it is on those who love them. Deaths in mass shootings or acts of terrorism (something we’ve seen all to much of lately) also can make it difficult for us to process in search of “Why?” But that doesn’t mean that a long slow struggle with cancer or another life threatening disease isn’t difficult. I have heard some cancer patients say that they believe a quicker death would be easier.

I think that what most of us really want is to die really old, in bed, surrounded by people who love us. But in The Walking Dead, that is most likely a pipe dream. By now in the show, most people know that they probably aren’t going to grow really old. They probably also know that their death is going to be a violent one. So death is a topic that, even if it isn’t always talked about, is something that is always on our characters’ minds. Especially when they are engaged in “all out war.”

This week’s episode was a more dialog-driven one where people took the time to talk about this question. In the Savior boardroom, the leaders (minus Negan) are trying to figure out big questions about betrayal and survival. Is there a “Benedict Arnold” among them? Are the workers going to revolt? And most importantly, how many people have to die in order for the privileged Saviors to survive?

Daryl and Rick have a similar disagreement about whether they should just blow a hole in the side of the Saviors’ compound in order to let the horde kill the workers. Daryl thinks that they should all die. Rick doesn’t. Too bad they had to let all of the weapons in the truck blow up while they argued about the dynamite. We also learned that Daryl now doesn’t think chokeholds are against the rules (in an awesome reference to season one). Daryl believes that they all deserve to die. Rick thinks that the workers need to be set free.

But even Negan waxes philosophical when it comes to the question of useful deaths. While he is stuck in a trailer with Gabriel, he explains that a few deaths are very important in keeping the order. We already knew that Negan is a pragmatist when it comes to killing, but it was very interesting to get a little bit of back story on the man. Was he a teacher? Does he feel guilty about how he treated his pre-apocalypse wife? It is actually quite amusing to think of him as a driver’s education teacher or a football coach in suburbia.

But probably the most significant discussion of this happens right at the beginning of the episode with Father Gabriel. We see a flashback of Gabriel praying to God at the altar of his church. This time it is about his acceptance of the inevitability of his own death.

Gabriel: (praying to God) I might die. I very likely will die. I’m not asking to live. You’ve given me redemption, and it’s that which makes me no longer fear death. What I fear, is a fruitless death. What I ask for, after you have given me so much… is purpose.

Gabriel seems to believe that he is going to die soon. But he also seems really obsessed with the idea of a good death. He doesn’t want a fruitless one and he believes that a proper death will somehow bring about purpose. Later in the episode we hear him confess to Negan about some of his horrendous deeds at the beginning of the apocalypse. Some of these things I had already forgotten about. But then he makes a feeble attempt to kill Negan which answers the question as to what he believed a fruitless death would look like. Perhaps he was still thinking about the importance of Sasha’s death last season as a meaningful sacrifice which saved so many lives.

But what I hope is really going on in Gabriel’s mind is an understanding of death through the lens of the Scriptures. He is a priest after all. Maybe he still remembers that his Christian faith is centered in the belief that Jesus Christ’s death is at the center of meaning in the universe. Or perhaps he remembers his studies of the history of Christian martyrs throughout the history of the church. There is no question that Christianity has had its share of meaningful deaths.

But what is frustrating to me is the fact that Gabriel hasn’t really figured out the meaning of purpose. It isn’t something that only comes in the last moments of your existence here on earth. It is something that we can find much earlier in life. It is also something that can come from who we are, in our relationship with God. Jesus taught this throughout the gospels.

Perhaps the greatest example of this comes in the sermon on the mount, in Matthew chapter five. Jesus is talking to a large crowd and he has been talking about the attributes of members of the Kingdom of God. But then he launches into two different metaphors which contain all kinds of insight on what He believes about purpose.        .

13 “You are the salt of the earth. But what good is salt if it has lost its flavor? Can you make it salty again? It will be thrown out and trampled underfoot as worthless.

14 “You are the light of the world—like a city on a hilltop that cannot be hidden. 15 No one lights a lamp and then puts it under a basket. Instead, a lamp is placed on a stand, where it gives light to everyone in the house. 16 In the same way, let your good deeds shine out for all to see, so that everyone will praise your heavenly Father. (Matthew 5:13-16, NLT)

He uses two different examples here to illustrate what purpose in life really means. First he talks about salt. Salt that has lost its flavor is basically useless. Jesus says that flavorless salt should just be thrown out because it is “worthless” (vs. 13). He is basically saying that if we are salt of the earth, then we are to remain salty. In other words, we were born with purpose and without it, we are nothing. Then He uses the illustration of light. He says that light is something that you have to let shine, or it is just useless. The purpose of a light is to shine, just like the purpose of a human being is to let our good deeds “shine.” Why does He say that we are to let our good deeds shine? He says, “so that everyone will praise your heavenly Father.”

Showing others the joy and purpose in a relationship with Jesus is the meaning of life. While Jesus himself would die a death with all kinds of meaning, He is focusing here on how we live, not how we die. He is saying that living the way that we were created to live is at the center of purpose. Just like salt, we are to just be who we were created to be. Just like light, we are not to hide under a bucket (or in Gabriel’s case a locked church while his congregation is dying). We are to let our light shine so that others can discover true purpose in life – a relationship with Jesus Christ.

1) As Yago (the gun running Savior wounded by Rick) is lying on the ground dying, Rick asks him “who won?” Yago says that “no one did.” Do you believe that Yago is right? Is there really a winner in situations like this?

2) Eugene has figured out that Dwight is the traitor to the Saviors because of the chess board paint on Dwights bag. He doesn’t say anything about it (for now). Do you think that Eugene is feeling guilty about siding with the Saviors or do you think he is just trying to figure out who the winner is going to be before he takes a side? Why do you think this?

3) Negan seems to think that killing the “right people” can save lives. Daryl actually seems to be thinking the same thing. Do you think that Daryl and Negan actually in the same place right now? Why or why not?

4) Gabriel fears a “fruitless death.” What do you think that he means by that?

5) Sasha didn’t die a “fruitless death” at the end of last season. She actually saved many lives. Do you think this has had an impact on Eugene? Why or why not?

6) In what ways do you think that Jesus means we are we like salt?

7) In what ways do you think that Jesus means we are we like light?

8) How does existing in the way that we were created bring purpose to our lives?

9) Does Jesus state the intended outcome for all of this (verse 16)?

10) How can you personally become more like salt of light in your life?