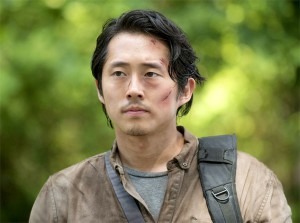 Have you spotted any Walking Dead fans today? If you have, you probably noticed that their composure was slightly different than weeks past. If you saw them gathered together around the water cooler today talking about this week’s episode, you’ll notice an ominous cloud hanging over the group. They may even resemble that giant mega-herd slowly walking towards Alexandria.

As a serious Walking Dead fan, I feel like I have a little less skip to my step today. If you don’t know what I’m talking about, you need to stop reading right now and go and watch the third episode of season six immediately…because something very major happened in this episode.

This morning I received a text from our youth pastor saying “I think Glenn is still alive.” Of course, he didn’t know that we had company over last night and I hadn’t watched the episode yet. So after I fired him (I’m the Senior Pastor) and told him to pack up his things, I turned on the episode nervously. (The irony is that this is the first time he has done this to me, while I have accidently spoiled things for him more times than I can count. So if forgetting spoiler alerts were actually grounds for termination, I would have been out of a job a long time ago!)

Sure enough, this week it looks like one of the most popular characters on the show has died. Glenn Rhee, a fan favorite, may no longer be with us. If you read the comics, this is a shock because it comes at the wrong time. If you read the trades, it is a shock because we know actor Steven Yeun just renewed his contract. If you only watch T.V. shows from the 70’s and 80’s, it is a shock because there is an old unwritten rule that certain characters are safe from death. We always knew that Sonny Crocket, Thomas Magnum and the A Team were safe from death because television shows just didn’t kill off the main characters… ever. Even the “who shot J.R.” cliffhanger resulted in the character surviving the incident. But we live in 2015, the era of red weddings and Walter White. We should know that anything can happen on television now… especially on The Walking Dead. But somehow, this particular death violates our sense of fairness. Why does a character that everybody loves have to die?

The internet is buzzing with discussion about whether Glenn actually is dead. And like many die hard fans, I watched the scene frame by frame on my DVR. It appears that Glenn’s intestines are being consumed by hundreds of walkers. Yes, I also know that Scott Gimple was a little bit cryptic about the character’s demise when he released a statement saying, “In some way, we will see Glenn, some version of Glenn or parts of Glenn again, either in flashback or in the current story to help complete the story.” Thanks for clarifying that for us Scott! (sarcasm intended) Next week we may see that Glenn slides under that dumpster somehow and escapes while the walkers chew on Nicholas, or maybe not. I am going to assume that Glenn is gone until they give me a reason to believe otherwise. (I assumed that Carol was gone from the show after her forced exile by Rick, until the show revealed differently).

The title of this episode was “Thank You,” which turned out to be Nicholas’ final words to Glenn before he shot himself. These words also are the last words that Glenn would ever hear from a human if he did indeed die. Nicholas said these words because Glenn’s compassion allowed him to retain some of his humanity before he had to face his end. But the words could have been spoken from many of the characters that Glenn left behind, because from the very first episode, Glenn was the guy that constantly risked his own life to save others. He was the guy that just couldn’t leave people behind.

This episode was mostly about the question as to whether it was okay to leave people behind in certain situations. Rick ordered Glenn and Michonne to just keep going when Alexandrians fell. But both Glenn and Michonne clearly were not going to do this. Ironically, Heath confronts Michonne about this, even though one of the most frustrating traits of the Alexandrians is that they always leave people behind. They did it to their own, and they did it to Rick’s crew. (Remember Noah anyone?) Nicholas was probably more guilty of this than all of them, and he even tried to kill Glenn to cover it up. But Glenn continues to show extreme forgiveness and actually tries to rescue Nicholas emotionally.

At one point in the episode Glenn and Nicholas happen upon a walker who needs to be put down. Nicholas recognizes him and says, “Wait, It should be me. He was on my crew. His name was Will. He was 19. We left him behind.”

Glenn knows that he is risking his life even being with Nicholas there, but somehow he wants him to grow and learn. Glenn just can’t leave a man behind. As a matter of fact, Glenn is a character who has never killed a human being on the show, a respectable feat for anyone living in this apocalypse.

I think that the most appropriate scripture passage that we should look at this week would be Galatians 6:9. If you don’t remember, this is the verse that is displayed on the wall of Father Gabriel’s church in season 5 episode 2. As the characters walk into the building, they see these words. While others are trying to figure out what has happened in there, Glenn seems fixated on the verse and he just stares at it. It obviously means something to him at the time. In this verse, Apostle Paul says, “And let us not grow weary of doing good, for in due season we will reap if we do not give up.” Galatians 6:9 (ESV)

This is such a perfect verse for Glenn, and I wish that a real pastor was there to explain it more to him. You see, this verse comes at the end of Paul’s letter to the Galatians where he is encouraging them to help in the restoration of those who were “caught in any transgression” (6:1). Here he is instructing Christians to do the very difficult work of restoring gently those who are in danger of falling away. Paul knows that this is hard work, but in verse 9 he points out that there is a happy ending to all this very strenuous and often discouraging work. When Paul says “in due season, we will reap” he is talking about the spiritual rewards in this life and in the next. He is basically saying that we are to show the same compassion that God shows us when He restores us, and while we may not see immediate results, those who persevere will always be rewarded. The reward may be the joy in witnessing the transformation of a fallen brother in life as we know it now, or it may be simply hearing the words “well done my faithful servant” when we enter our eternal home.

Glenn is someone who is passionate about “doing good” but I am not sure if he actually believes that there is a reward. In the first episode of the show, Rick asks him why he rescued him, and Glenn says that he just hopes that someone will someday do the same for him. If this is indeed Glenn ‘s final moment, it is a very sad moment because his hopes have never been realized, or at least not in the way he would have imagined. What I would have loved to tell Glenn is that there is a point to compassion, which rests in and is defined by the hope that we have in Jesus Christ.

SEASON 6, EPISODE 3 DISCUSSION QUESTIONS:
1) What do you think Glenn hopes for?

2) What do you think that Nicholas meant when he told Glenn “thank you”?

3) Michonne tries desperately to help Heath understand that he just doesn’t get that she is trying to help him. Have you ever been in a situation where you are helping someone and they think you are actually trying to harm them?

4) Should we help people who don’t want or appreciate our help? Explain.

5) What do you think Paul means by “in due season”? Is he promising that everyone who does good will be rewarded immediately? Explain.

6) What would you like to tell Glenn while he was staring at the verse in the church?

7) What are the things that make you want to “give up” helping others?

8) What do you believe is the reward that God is offering us for “good work”?

9) What does this kind of “doing good” look like in our life this week, this month… this year?