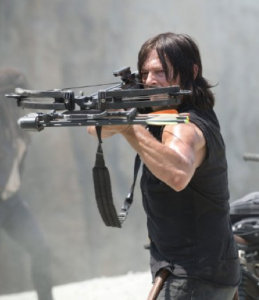 It is hard to believe that it has been six months since the last episode of The Walking Dead. Sure, we have had Fear the Walking Dead to help us keep our Zombie fix, but let’s just face it, FtWD is no Walking Dead. These are the characters that America has fallen in love with, and six months is just too long for us to wait to hear from Rick, Daryl, Glenn, Michonne and the rest of the crew.

Occasionally, people from my congregation (I am a pastor) will ask me why I love a show about zombies so much. I always tell them that I would love the show just as much if it took place during a nuclear holocaust, a national viral outbreak or even aboard a sinking ocean liner. It is not the walkers, but the human characters and their stories that I love. This show is a morality tale about grace under pressure, yet it is full of weak and flawed people. It takes place in a world where the choices that people make have consequences… often deadly ones. Yet, it also takes place in a world that is unpredictable and dangerous despite the wise (or stupid) choices that people make. Most importantly, it is a show that deals with huge issues like love, death, loss and belief every single week. So for me, the world of The Walking Dead is a world that reflects more reality to me than any other show on television… even though there are zombies.

We left off last March with a bang (literally). Rick finally put down the shifty wife-beater Pete after he murdered Deanna’s beloved husband Reg. The problem of course was that this execution took place in front of most of the people of Alexandria and Rick’s long lost friend Morgan. It is safe to say that most of the people of Alexandria have not seen this kind of brutality before and we have no idea how they are going to respond. We also have no idea how Morgan, the mysterious Zen warrior with the Donatello staff is going to respond. Clearly, he and Rick have taken very different paths since they have seen each other many seasons ago. But we do know one thing for sure – at the end of the cliff hanger, Deanna now is on Rick’s side, and she has finally learned that Alexandria’s only hope is to start facing the reality of the situation that they are in.

This week’s season premiere, directed by practical effects master Greg Nicotero, starts exactly where last season left us… at the moment that Rick executes Pete. But before we get any answers about what happened, we skip forward to a scene where we see the group standing next to a rock quarry full of thousands of walkers that are trapped by some carefully placed semi-trucks. The shot is unlike anything we have ever seen on the show before… it is a giant mega-herd of walkers, enough to fill a stadium. Apparently, they used over 3000 zombie extras on this episode, a Walking Dead first. Rick is clearly in charge of the whole group as he quickly devises a plan to corral these walkers. The rest of the episode jumps back and forth from the aftermath of Pete’s execution to the present where all of the characters are implementing Rick’s plan. Nicotero uses the bold technique of placing all flashbacks in black and white to help us navigate through the time shifts, and ultimately unravels the story of what happens during these critical several days.

Within the first five minutes of the episode, we get the answer to the question that has been nagging Rick and the group since halfway through last season. How is it that Alexandria has not faced the same amount of walker attacks as everyone else in the rest of the world? When our gang first encountered the people in this town, they seemed to act more like the people in season one than people who have survived several years of a zombie apocalypse. They have been living in comfort while the rest of the world has been burning. But tonight, we finally figure out why. It turns out that the zombies can get into the quarry, but they can’t get out. Apparently, the more walkers that end up in the quarry, the louder they get, which in turn attracts more walkers. This means that Alexandria has been mostly zombie free since the beginning of this crisis. Finally, we get some explanation of why these people are so inept at zombie killing. This also explains why they all seem to make “rookie” mistakes that get other people killed. We haven’t really seen people do this since beginning of the outbreak when people still hadn’t learned how to survive in this world. Let’s face it, most of the people in this world who make choices this bad are already dead.

This is what I love so much about this show. Alexandria serves as the perfect metaphor. You have those who haven’t lived in Alexandria who see the world for what it has become – a decaying apocalypse where you always have to be ready. Outside, a single mistake can cause instant death for you and those in your group. In contrast, people living in Alexandria have lived in a bubble, not knowing that just two miles out of their little paradise is a zombie herd that will eventually wipe them all out. Rick and his group are not unlike the prophets of the Old Testament, trying to convince an unbelieving people that their days of comfort are numbered. The spiritual allegory is not only profound, but also strikingly Biblical.

The whole episode is about Rick’s plan to try and save Alexandria by redirecting the herd. But to me, the most interesting part surrounds the recurring theme of mercy. Rick simply doesn’t believe in mercy anymore because he has just watched too many people die. But some other members of the group don’t necessarily see it the same way that Rick does. Glenn has every reason to feel the same way that Rick does. In the last season, he watched Noah die horribly because of the very selfish Alexandrian Nicholas. But if that wasn’t enough, Nicholas was so embarrassed about this that he tried to kill Glenn in the woods. Glenn gets the better of him, but in an unusual act of mercy, doesn’t kill Nicholas. Glenn seems to be handling the scenario very differently than Rick. But Glenn has been this way since the very beginning. In the first episode of the series, Rick is amazed when Glenn risks his own life to save Rick. When Rick asks him why he saved him, Glenn tells him that he does it because he hopes that someday someone will return him the favor. This is the kind of guy that Glenn is. He is just naturally merciful. But at this time in the show, he is also a survivor, and this is where the tension mounts. So, Glenn confides in his lover Maggie and explains the whole situation to her.   Later she discusses the Nicholas situation with Tara.

Tara: “He got Noah killed”

Maggie: “He did. He did more than that. He lured Glenn into the woods and tried to kill him.”

Maggie: “Glenn told me I could tell everyone, if that’s what I wanted to do. Could get Nicholas exiled. He’d die out there. Could have done that. You could do that now.”

Tara: “He got Noah killed and he tried to kill Glenn?”

Jonathan mentioned in an article last year that he wished that there were Christians on the show. Unless you count Father Gabe (which I don’t), Jonathan is right here. There just aren’t many Christians in the world of this show. Even more, there aren’t really any people who talk about God at a time when I think a lot of people would be discussing all things spiritual. But I have to admit, it is in moments like this that I am excited when a character acts like a Christian should act. Here Glenn is showing an attribute that you just don’t see very often in Western media – grace and mercy. Of course, we have no idea about what is going to happen with Nicholas. More than likely, he won’t learn from his mistakes (and will probably come to a violent end like Carter did tonight). But what is so compelling here is the incredible mercy that you see coming from Glenn. Maggie points out that this is just part of Glenn’s nature.

14 Bless those who persecute you; bless and do not curse. 15 Rejoice with those who rejoice; mourn with those who mourn. 16 Live in harmony with one another. Do not be proud, but be willing to associate with people of low position. Do not be conceited.

17 Do not repay anyone evil for evil. Be careful to do what is right in the eyes of everyone. 18 If it is possible, as far as it depends on you, live at peace with everyone. 19 Do not take revenge, my dear friends, but leave room for God’s wrath, for it is written: “It is mine to avenge; I will repay,” says the Lord. (NIV)

Earlier in the passage Paul explains that we do this “in view of God’s mercy” (vs. 1). As Christians, we understand that mercy is something that we need to have toward others because God has shown it in excess for us. Glenn’s hope of mercy in his own future, would be better realized if he understood that there is an abundance of grace and mercy from God available to him at any time. I like to think that Glenn is actually ripe for a conversation about this with a believer who knows the author of grace and mercy. If not, someone should at least give him a copy of Jonathan’s book, The Zombie Apocalypse Guide for Teenagers.

1. Rick views the more inept Alexandrians like Carter as “already dead”. Does God look at people in this way? Should we?

4. In this episode, Alexandria is exposed as a false hope in a world that is decaying. What are some of the false hopes that we may have constructed in order to pretend that everything is OK when it is not?

5. Glenn shows mercy to someone who killed his friend Noah and tried to kill him. Is there a line that person can cross in our lives where we will no longer show them mercy?

6. Does God draw lines that limit His mercy?

7. How can we show this kind of mercy this week, in even the smallest of circumstances?