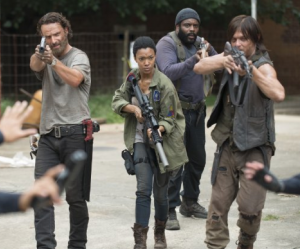 It only took about 75 seconds into this week’s episode for us to realize exactly how far Rick was willing to go to protect the group.

How far would you be willing to go?

This season The Walking Dead has been begging the question, “Is it okay to kill someone to protect yourself or your loved ones?” We’ve encountered these moments several times. In the very beginning of the season when the group escaped from Terminus, Rick urged the group to go back and wipe out Gareth and the other murderers, ending their tyranny. But the group urged him to forget about it and move on. That choice eventually cost Bob his life.

Tyreese chose not to kill Martin, and that choice resulted in him eating Bob’s leg and returning to attack the group at the church.

And then last week, in Episode 7, both Tyreese and Daryl opted to go the peaceful route and offer a trade to Dawn instead of trying Rick’s stealth option and slitting throats. The plan backfired. Sgt Lamson died and Beth died. 82% of Talking Dead fans agreed Beth would still be alive had they gone with Rick’s Zero Dark Thirty plan instead of Tyreese’s Ghandi plan.

We probably could all debate about when it’s right to kill until we’re blue in the face (like an old-school Dawn of the Dead zombie). But in all honesty, how many of us are going to be put in a life or death situation where we have to choose whether to kill someone or protect our family?

Instead, let me ask a bigger question: what is the difference between Rick’s group and the other groups they have encountered? What makes Rick, Glenn, Maggie, Tyreese, Daryl… and the whole group noticeably “good”?

Think about that for a second. The Governor. Dawn. Dare I bring up Shane? What are some of the common denominators of these adversaries our group keeps encountering?

How convenient when Shane killed Otis to save his own butt… I mean… save the medicine for the group.

Dawn’s said she was looking out for the best of the group, but she quickly became a tyrant, enforcing her own agenda rather than the greater good.

The Governor… well… need I even articulate? Dude cut off Hershel’s head!!!

Rick, however, proved himself once again at the end of the episode when he invited anyone to join their group. The same Rick that didn’t freak out when Tyreese and Daryl questioned his decision. Rick proves honorable and selfless again and again.

13 If you are wise and understand God’s ways, prove it by living an honorable life, doing good works with the humility that comes from wisdom. 14 But if you are bitterly jealous and there is selfish ambition in your heart, don’t cover up the truth with boasting and lying. 15 For jealousy and selfishness are not God’s kind of wisdom. Such things are earthly, unspiritual, and demonic. 16 For wherever there is jealousy and selfish ambition, there you will find disorder and evil of every kind.

17 But the wisdom from above is first of all pure. It is also peace loving, gentle at all times, and willing to yield to others. It is full of mercy and the fruit of good deeds. It shows no favoritism and is always sincere. 18 And those who are peacemakers will plant seeds of peace and reap a harvest of righteousness. (James 3:13-18, NLT)