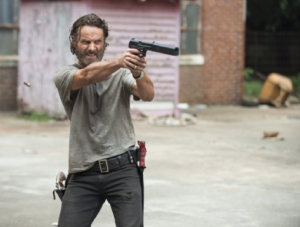 Murder, self-esteem, trust… this episode touched on so many topics. And as much as we could talk about Tyreese’s growing influence of pacifism (Is it ever right to take lives?), I can’t help but gravitate toward discussing the scenes where Rosita began to recognize her true value.

Value and self worth are an intriguing real world topic, especially when entertainment media constantly sends us messages of “you’re only valuable if you’re…” fill in the blank: smart, sexy, an athlete, an amazing musician…

Sadly, many of us drink the Kool-Aid. We feel the need to “earn” worth.

This season on The Walking Dead we’ve encountered several people who have bought into this “not good enough” mindset in this post-apocalyptic world. Eugene felt the pressure to lie about his “value” so Abrahams would accept him. A doctor went as far as killing another doctor to maintain his worth (a compulsory side effect of hanging out with a group who only values people if they bring value to the group. No skills… no value.)

That’s where Rick, Glenn, Tara and the whole crew are different. Your value is simply friendship, and that is good enough (something we talked about two episodes ago).

Rosita began to see this unconditional acceptance from Glenn this week.

About 30 minutes into the episode Rosita shared her story with Glenn, questioning her own value, wondering if Abrahams really valued her for her skills, maybe even wondering if she was only valuable to him for other reasons (sex perhaps?)

But a few minutes later Glen and Rosita work together to catch a fish together and Rosita learns that she’s valuable just the way she is.

The scene starts about 43 minutes into the episode (including commercials).

Glenn: Nice! You know how to clean these things?

Rosita: (Smiling) I know how to clean these things.

Glenn: Good. We’re going to need that. (Rosita is surprised.) Where ever we all wind up. You in?

Rosita: (Pausing to think for a second) I’m in. (She smiles)

SEASON 5, EPISODE 5 DISCUSSION QUESTIONS:
1.  Why do you think Rosita was questioning whether Abraham really valued her or not?
2.  What makes someone valuable?
3.  What are some of the characteristics the world says is valuable?

Read a few paragraphs from the executive summary of this report about “sexualization” from the American Psychological Association.

4.  According to this report, what is it that the world values above most other characteristics?
5.  What are some examples you’ve seen of sexualization?
6.  What are some of the consequences of sexualization? (Scroll down in that same report and you’ll see them listed.)
7.  Why is it shortsighted to value someone only if they are sexy, popular, ubertalented, etc.?
8.  What makes people truly valuable?

31 What shall we say about such wonderful things as these? If God is for us, who can ever be against us? 32 Since he did not spare even his own Son but gave him up for us all, won’t he also give us everything else? 33 Who dares accuse us whom God has chosen for his own? No one—for God himself has given us right standing with himself. 34 Who then will condemn us? No one—for Christ Jesus died for us and was raised to life for us, and he is sitting in the place of honor at God’s right hand, pleading for us.

35 Can anything ever separate us from Christ’s love? Does it mean he no longer loves us if we have trouble or calamity, or are persecuted, or hungry, or destitute, or in danger, or threatened with death? 36 (As the Scriptures say, “For your sake we are killed every day; we are being slaughtered like sheep.”) 37 No, despite all these things, overwhelming victory is ours through Christ, who loved us.

9.  How much was God willing to sacrifice for us?
10.  What does that reveal about his love for us? (also read John 15:13)
11.  How should we live our life knowing that God loves us and values us this much?