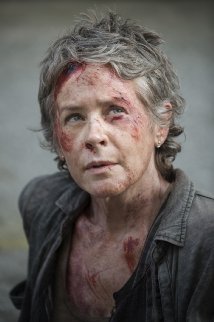 It’s the phrase Carol and Daryl kept saying in this episode. And who can blame them. In a world with no rules, no moral code, and at times… no hope… survivors probably wonder, why even try?

That’s the way the two of them felt when they took a minute to collect their thoughts.

The scene begins about 15 minutes into the show (including commercials).

Carol: Said we get to start over.

A long silence. Carol stares out the window thinking.

Daryl: Why don’t you say what’s really on your mind.

Carol: I don’t think we get to save people anymore.

Daryl: Then why you here?

But then Noah stole their weapons and Daryl changed his mind.

This was the Daryl Noah encountered the second time. Angry Daryl. Marlbaro Daryl. Unmerciful Daryl. When Noah pleaded with Daryl, his response was merely, “No, I already helped you once. It ain’t happening again.”

Carol stood watchfully. We saw as the director rack focused to her face; she didn’t approve. Daryl walked away (about 52 minutes into the episode, including commercials).

Daryl: You almost died cause of him!

Daryl: (he thinks about his friend’s valid words) Nah. Let him be.

Daryl turned his back and walked away. The zombie broke through the door and began attacking Noah on the ground. Out of nowhere Daryl’s arrow pierced the zombie’s head.

SEASON 5, EPISODE 6 DISCUSSION QUESTIONS:
1.  Why did Carol think they should help Noah, even though he didn’t deserve their help?
2. Why did Daryl decide to come back and help Noah?
3. Was he right? Explain.
4. What would you have done?

He has shown you, O mortal, what is good.
And what does the Lord require of you?
To act justly and to love mercy
and to walk humbly with your God. (Micah 6:8, NIV)

In ancient Biblical times, when people burnt an offering, they got to start over.

Look up the context of the passage above, because you’ll find something intriguing. Look up Micah 6:6-8.

In verses 6 and 7 the writer asks God, should I bow before you ritualistically? Should I burn offerings? Should I sacrifice rams, oil… my firstborn? And God basically responds by saying, “I don’t want your meaningless sacrifices (see Isaiah 1:11 too). Instead… and he lays it all out in Micah 6:8.

Daryl and Carol each want to start over. They are each “trying.” Daryl’s “trying” truly manifested itself when he decided to show Noah mercy.

What does “trying” look like for you this week?