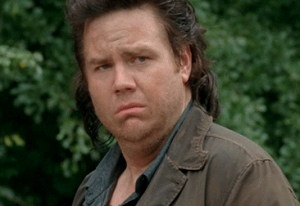 Eugene has been carrying around a huge burden… and I’m not talking about his mullet. He’s been living a lie, hoping it would award him value and protection, but really it’s just been eating him away.

I’ve been waiting for this moment to erupt. As a fan of the comics, I knew Eugene was a fake (or suspected anyway… the comic is not always parallel with the show). But I was curious how the truth would rear its ugly head.

Tara might have been the key to drawing Eugene out. So far he’s been coasting under the radar without anyone confronting him or demanding a response. But when Tara caught him spying on Abraham and Rosita, the conversation prompted Eugene to confess a small sin. Little did Tara know, this was just a tiny piece of the enormous charade Eugene was hiding from the group.

When Eugene confesses, Tara presses him for an explanation.

The scene begins about 26 minutes into the show (including commercials).

Tara: Why did you do that?

Eugene: I appreciate the positive affirmations and looking the other way on the perversion. But I know empirically and definitively that I cannot survive on my own, I cannot.

Tara: So you killed the bus?

Eugene: If I don’t cure the disease, if I don’t save the world, I have no value.

Tara: That’s not how it works.

Eugene: If I don’t fix things there is no way you people would keep me around, share resources, even protect me.

Tara: Of course we would. We’re friends. We have each other’s backs. That’s it. That’s how it works.

Tara: Don’t tell anyone else what you did. I’ll keep your secret and we’ll keep going. You know you messed up. You’re trying, but dude, you can’t do something like that again.

Eugene: I don’t know why I told you.

Tara: I do. Welcome to the human race…

Tara showed Eugene grace, despite his past. It’s something Tara has experienced first hand, and was glad to extend to Eugene.

But when the group almost steers towards even greater danger for Eugene’s fake cause, he can’t stand it any longer and he comes clean! (And that’s not the first time we’ve seen that in this show.)

SEASON 5, EPISODE 5 DISCUSSION QUESTIONS:
1.  What triggered Eugene to confess to Tara in the “self help” section?
2. Share a time when you held something secret and it began eating away at you. What triggered you to confess?
3. How did you feel when you came clean?
4. How would you have felt if someone responded to you like Tara did to Eugene in the dialogue above?
5. Do you think her compassionate and supportive response spurred him to come totally clean later in the episode? Explain.

Dear brothers and sisters, if another believer is overcome by some sin, you who are godly should gently and humbly help that person back onto the right path. And be careful not to fall into the same temptation yourself. 2 Share each other’s burdens, and in this way obey the law of Christ. 3 If you think you are too important to help someone, you are only fooling yourself. You are not that important. (Galatians 6:1-3, NLT)

6. How does this passage say we should “help a person back onto the right path”?
7. How do people typically tend to confront sinners? How does that usually turn out?
8. What does it look like to “share each other’s burdens”?
9. How can you share someone’s burdens this week?