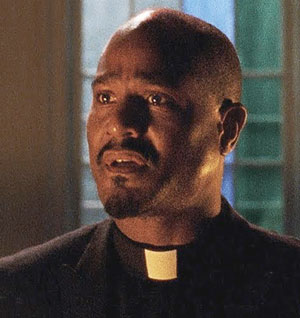 If you open your Bible to the book of James, the author concludes his first chapter with the following verse:

27 Pure and genuine religion in the sight of God the Father means caring for orphans and widows in their distress and refusing to let the world corrupt you.  (James 1:27, NLT)

The last two weeks of The Walking Dead have taken place inside a church. The church brings up a variety of emotions and feelings to people around the world. To some it’s a place of worship and love. To others, it’s believed to be a place of judgment and hypocrisy. Sadly, some churches have lived up to that bad reputation, casting a dark shadow on churches across the nation.

What do your neighbors think when they drive past the church on the corner?

Four walls and a roof? Or a place that cares for orphans and widows?

When Rick and all his friends first walked in the church last week in Episode 2, they walked past various religious imagery, including the following verse:

9 Let us not become weary in doing good, for at the proper time we will reap a harvest if we do not give up.. (Galatians 6:9, NIV, close to the same version that was on the wall)

What does “doing good” actually look like in this fallen world?

This week Rick could have said, “I told you so” when they discovered Gareth, Martin and the other cannibals were back and in search of food. Just two episodes ago Rick wanted to go back and eliminate every one of these heinous killers, but the group encouraged him to forget about them and move on.

Sadly, “forgetting about them” didn’t work. Apparently it’s kill or be killed in this world. And that’s the dilemma our group is facing week after week. We’re witnessing this polarization in some of the characters. Tyreese is slowly transforming into the pacifist of the group. He’s the Martin Luther King Jr. He chooses peace whenever possible. Rick, however, does whatever it takes to insure the survival of the group. He’s the Malcolm X. “By all means necessary.”

The group came face to face with the ugliness of capital punishment when they confronted Gareth, Martin and the other cannibals in the church. Rick decided that assassinating them was the only choice that ensured the groups survival. So Rick keeps his promise to Gareth and uses the red handled machete to kill him. Rick, Michonne, Abraham and Sasha hacked and stabbed, spraying blood everywhere, turning the Lord’s house into a slaughterhouse, all in plain view of the inscription on the wall, “He who eats my flesh and drinks my blood has eternal life.”

But the anger and vengeance that poured out of Rick, Michonne, Abraham and Sasha made many wonder. “Are we becoming like them?” You could see the doubt on many of their faces. Maggie. Glenn. Tara.

Feeling the doubt, Rick justified their actions, “It could have been us.”

Reverend Gabriel, the same man who selfishly locked his congregation outside to die while he horded all the food, walks into the sanctuary horrified, “This is the Lord’s house!”

Maggie, a girl who grew up in a Christian home, quickly retorts, “No, it’s just four walls and a roof” (the title of this episode).

It makes us wonder. Did Rick actually “do good” by eliminating the threat that pursued them? In an interview about this episode shown on The Talking Dead, actor Michael Cudlitz (Abraham) contended, “The brutality of how we kill them is balanced by the brutality that they have been executing on everyone else.”

Just as we all began searching our own morality for the answers to that question, the writers of the show turned an interesting corner. They brought us to Bob’s bedside to hear his dying words, and his words reminded us what Rick and their group stood for.

The scene begins about 50 minutes into the show (including commercials).

Bob: I just want to say thank you.

What I said yesterday, I ain’t revising it. Even in light of current events. Nightmares end. They shouldn’t end who you are. And that is just this dead man’s opinion.

In the midst of this living nightmare, in one dead man’s opinion, Rick hasn’t stopped being good. He selflessly “took people in.”

What a contrast to reverend Gabriel who selfishly left people outside to die.

SEASON 5, EPISODE 3 DISCUSSION QUESTIONS:
1.  This week we discovered that Gabriel locked out his congregation and his friends. Why do you think he did this?
2. Why was he plagued by that decision?
3. Why is it dangerous to “take people in” in this world?
4. Why do Rick and his friends take people in?

I can’t hear Bob’s words, “you took me in” without thinking of this famous story Jesus told in the book of Matthew:

Read the following passages from scripture:
31 “But when the Son of Man comes in his glory, and all the angels with him, then he will sit upon his glorious throne. 32 All the nations will be gathered in his presence, and he will separate the people as a shepherd separates the sheep from the goats. 33 He will place the sheep at his right hand and the goats at his left.

34 “Then the King will say to those on his right, ‘Come, you who are blessed by my Father, inherit the Kingdom prepared for you from the creation of the world. 35 For I was hungry, and you fed me. I was thirsty, and you gave me a drink. I was a stranger, and you invited me into your home. 36 I was naked, and you gave me clothing. I was sick, and you cared for me. I was in prison, and you visited me.’

40 “And the King will say, ‘I tell you the truth, when you did it to one of the least of these my brothers and sisters, you were doing it to me!’

44 “Then they will reply, ‘Lord, when did we ever see you hungry or thirsty or a stranger or naked or sick or in prison, and not help you?’

45 “And he will answer, ‘I tell you the truth, when you refused to help the least of these my brothers and sisters, you were refusing to help me.’

5. What was the difference between the sheep and the goats?
6. What were the specific ways the sheep did good?
7. What might that look like in your world?
8. According to the passage above, who are you helping when you help “the least of these”?
9. Why do you think it’s so important to help people in need?
10. Why does Jesus tell this story?
11. What is one way you can reach out to “the least of these” this week?

This episode never answers whether killing is “good.” I’m sure Rick and Tyreese still sit on opposite ends of that debate. But this week’s episode clearly demonstrated the importance of taking people in. That’s what Jesus would do. That’s what he wants people in his house to do. That’s what “genuine religion” truly looks like.

27 Pure and genuine religion in the sight of God the Father means caring for orphans and widows in their distress and refusing to let the world corrupt you.  (James 1:27, NLT)