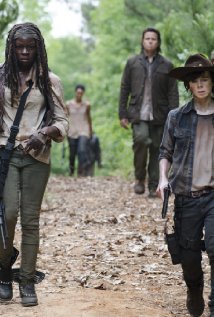 The gang is back together now, as evidenced by the trademark Reservoir Dogs slow-mo strut shot. Other than Beth, who is still MIA, everyone is accounted for. So for the first time in a long time, the group pauses to take a breath in an abandoned church. It’s during this “pause” that many of the group seek to collect their thoughts and prepare themselves mentally and psychologically for what might lie ahead.

Episode 2 tackles the theme of overcoming our past. Father Gabriel is introduced as a reverend of a small church who has somehow survived since the dead began walking the earth. Gabriel is plagued by guilt for something, and we can only guess that it has something to do with the fact that he survived alone in the church while countless others perished outside.

It’s always intriguing when Hollywood introduces religious characters. Most often, these individuals are depicted as the archetypal hypocritical, unloving Christian. I’m curious to see if they defer to this overplayed stereotype.

The jury is still out on Father Gabriel (even though 78% of Talking Dead viewers voted that he is dangerous and shouldn’t be trusted), but so far, his refusal to confess what’s bothering him is making the group a little leery of his actions. That’s probably why Rick not only asked him the “three questions” (a la Season 4, Episode 1), but basically told him, You endanger my people, I endanger you.

But Gabriel isn’t the only one struggling to find penance for sins past. Carol, Michonne and Tyreese each express the individual desire to squash bad memories in search of a new beginning. Carol and Rick even share a moment where the two of them make things right.

Let’s face it. People don’t like to carry around secrets. These secrets become burdens, weighing them down emotionally. Daryl feels this struggle from Carol, and even though he’s not pressuring her to confess, he makes it clear that he’s willing to listen.

Perhaps that’s why Tara approached Maggie, burdened with the guilt of once standing with the Governor (a path she already navigated with Glenn in Season 4, Episode 10).

The scene begins about 50 minutes into the show (including commercials).

Tara: I was at the prison, with the Governor.

Maggie is speechless, realizing what Tara is confessing.

Tara: I just didn’t want it to be hidden that I was there.

Maggie: You’re here with us now.

SEASON 5, EPISODE 2 DISCUSSION QUESTIONS:
1.  Why were so many people searching for forgiveness?

2. Why do people feel the need to disclose sins of the past?

3. How would you have responded if you were Maggie, especially after losing your father to the Governor?

4. Was Maggie right to forgive Tara?

21 Then Peter came to him and asked, “Lord, how often should I forgive someone[b] who sins against me? Seven times?”

Then Jesus tells a story about a guy who was forgiven much by a king, but wouldn’t forgive someone else even a little. The ending of the story is a little sobering:

34 Then the angry king sent the man to prison to be tortured until he had paid his entire debt.

35 “That’s what my heavenly Father will do to you if you refuse to forgive your brothers and sisters from your heart.” (Matthew 18:34,35)

6. What does God do if we won’t forgive others?

7. Why won’t God forgive us, if we won’t forgive others? (A tough answer to a tough question: God is willing to forgive us if we are willing to put our complete trust in Him. Part of that complete trust is the willingness to give up our own selfish desires. That includes “grudges.” God welcomes us to him when we are ready to let go and give ourselves completely to him.)

Are you holding onto a grudge that you want freedom from?

Pray and ask God to give you the strength to give up that resentment to him. Ask God to take that grudge from you and free you from bitterness.