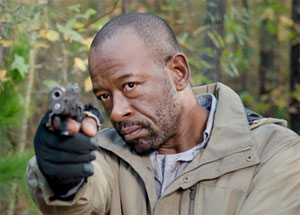 It’s the Season Finale’, and 90 minutes just didn’t seem like enough time. I can’t believe we have to wait until the fall to see more The Walking Dead!!! (Good thing we’ll be posting Season 3 discussions this summer here on The Gospel According to The Walking Dead during this long break.)

So much happened this episode, with so much to talk about. That’s what’s so good about this show… it spurs meaningful conversation.

The show begins with Morgan’s Book of Eli moment. Two very evil guys attempt to kill him, and Morgan kicks butt, but doesn’t kill them. In fact, he even makes sure no walkers are around when he leaves them in the car so they will survive (something actor Lennie James verified on the after-show The Talking Dead).

It’s intriguing to see the contrast of Morgan, “all life is precious” to Rick, “we get to choose who lives and who dies.” Both characters have been surviving successfully in this heinous world, but with two different outlooks.

In another intriguing moment Rick and Carl dialogue about the people of Alexandria’s need for new leadership. Rick and his group see Alexandria’s weaknesses, but Rick’s warnings have fallen on deaf ears. Carl sees this, but encourages Rick to try to warm them:

Carl: They need us. They’ll die without us… you have to tell them.

Rick: I told them last night.

Carl: You have to tell them so they can hear you.

Rick: I don’t know if they can. Does that make you afraid?

Carl: Just—for them—you have to tell them.

Another theme that jumped off the screen this episode was forgiveness (a theme we’ve encountered again and again in previous episodes). In this fictional post-apocalyptic world, even forgiveness and mercy have consequences. Morgan’s mercy to the two guys that attacked him cost the man in the red poncho his life. Alexandria’s forgiveness of Pete cost Deanna’s husband his life.

Still, we see some people show mercy, and others “an eye for an eye.” Deanna, once a pacifist, had a change of heart when her husband was killed by Pete. It’s hard to forget Deanna’s closing line: “Do it Rick.” And Rick shot without hesitation.

Glenn, in contrast, spared Nick, even though Nick not only caused Noah’s death two episodes ago, but tried to kill Glenn. Similarly, Maggie forgave Father Gabriel, probably one of the most disliked characters on the screen this season, a hypocrite, a murderer… and all around douchebag.

These questions provoke us to ask:

“What would we do if we were there?”

“If I were Glenn, would I kill Nick, or let him live to perhaps get someone else killed?”

“How come Hollywood never shows a cool Christian character? (off topic, but can’t help but wonder this)

I think it’s notable to observe that these ethical dilemmas in a society without rules are much different than the ones we encounter day to day. Most of us don’t live in anarchy and don’t have to decide whether to kill someone to protect our family and friends.

We do, however, often encounter situations where we need to decide whether to forgive others… or hold onto hate and let it torture us.

God takes forgiveness seriously. In fact, each time we pray, he wants us to remember to not only ask for forgiveness, but to remember to forgive others. Look what Jesus said about this when he was teaching the disciples how to pray:

“If you forgive those who sin against you, your heavenly Father will forgive you. But if you refuse to forgive others, your Father will not forgive your sins. (Matthew 6:14-15, NLT)

SEASON 5, EPISODE 16 DISCUSSION QUESTIONS:
1. Why do you think Glenn showed Mercy on Nick? What would you have done?
2. Why did Maggie initiate forgiveness for father Gabriel? How did that seem to resolve the situation?
3. According to the verse above, what does God do if we forgive those who sin against us?
4. What happens if we don’t forgive others?
5. Why do you think God is so severe about this?
6. What did God do for us, even though we turned our backs on him? (Romans 5:8)
7. Who is someone that you need to forgive?
8. What is something you can do this week to initiate that forgiveness?