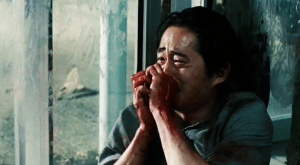 The community of Alexandria might be an incredible asset, but the people who live there are a liability.

Maybe it’s the fact that they have lived behind walls for too long. Maybe their little community cultivates a climate of cowards… whatever the reason, the Alexandrians seem to lack any degree of moral fiber. When it hits the fan, they abandon their friends and run.

This week was a tough week to watch for many. My wife Lori was emotionally shook after watching the episode. It’s difficult to lose people we’ve grown to love, amiable characters like Noah and his growing desire to learn.

Combine that with the gratuitous violent zombie deaths. Wow! It will be interesting to see how mainstream audiences react to watching one of their beloved characters get eaten alive and have his face torn off. (Was this TV’s The Walking Dead, or Romero’s Dawn of the Dead?)

Others may argue realism, “This is what life would be like in this kind of post apocalyptic situation.” Whatever your reaction, I was pleased to see several of our main characters rise up in courage and integrity, putting their own safety at risk to save others, with no help from any of the inept Alexandrians.

I guess that’s why Gabriel’s conversation with Donna in the last few minutes of the show was especially frustrating. It was so skewed from the reality of the situation—the polar opposite, in fact.

(Isn’t it nice when Hollywood provides yet another example of a religious wacko?)

It’s interesting to contrast Gabriel’s words with the actions we saw in this episode alone. Take his words: “They will put their own lives before yours.” Those words would accurately describe the Alexandrians on the construction crew who were about to abandon their own friend Francine (who dropped from the tractor bucket) until Sgt. Abraham saved her. Those words would also easily describe Nicholas, the panicky Alexandrian who sacrificed Noah to save his own backside, scooting out the revolving door. In fact, those words would readily describe Gabriel himself, who sacrificed his congregation earlier this season to save himself.

So why is he accusing Rick’s group?

Does he have any argument whatsoever?

SEASON 5, EPISODE 14 DISCUSSION QUESTIONS:
1. What was the most frustrating moment in this episode?
2. What would you have done if you were Sgt. Abraham and you saw Francine fall out of the tractor bucket, surrounded by walkers?
3. What is Gabriel trying to accomplish?
4. Why does Gabriel think Rick’s group are not good people? Is he right?
5. How do you think someone would describe you if they saw the way you behaved in a crisis situation?

I can’t help but think of the story of Daniel when the other officers of the court—his coworkers—became jealous and tried to find fault in Daniel.

Read Daniel 6:4-5
4 Then the other administrators and high officers began searching for some fault in the way Daniel was handling government affairs, but they couldn’t find anything to criticize or condemn. He was faithful, always responsible, and completely trustworthy. 5 So they concluded, “Our only chance of finding grounds for accusing Daniel will be in connection with the rules of his religion.” (NLT)

6. What did Daniels co-workers find against him?
7. What do you think people would find if they tried to dig up dirt on you?
8. Does God care about our reputation? (Read I Peter 2:11, 12)
9. Describe someone you know whose reputation seems “faultless.”
10. How would you hope someone would describe you?
11. What would it take for you to be like this? (Ephesians 4:21-24)
12. What is something you can do this week to walk in the right direction?