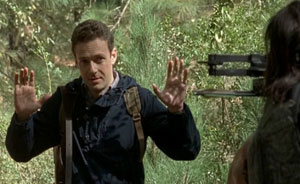 It’s the second week of this radical transition from Dawn of the Dead to Mayberry, and it’s interesting to see the effect on some of Rick’s group.

Sasha is experiencing full on PTSD (although I might have gone a little wacky at that party too… I mean… break out the Twister or something). Carl is showing signs of being a normal teen. And Carol… wow! I don’t even know what to say about Carol.

I think the scene that jumped out at me the most this week was Aaron’s welcoming of Daryl. Let’s be honest. As much as we love Daryl, he’s not exactly the most warm and responsive individual at first. But that didn’t stop Aaron.

I know I’m not going to earn any brownie points from some by labeling Aaron a role model, but this has nothing to do with Aaron’s sexual preference or lifestyle. The fact is, Aaron made admirable efforts to welcome Daryl to the group.

How are you at welcoming people different than you?

SEASON 5, EPISODE 13 DISCUSSION QUESTIONS:
1. How easy did Daryl make it on Aaron when Aaron made efforts to connect?
2. Why do you think Aaron kept trying with Daryl, even though Daryl didn’t make it easy?
3. Can you think of someone you could reach out to?
4. What might this look like?

Read the story of Zacchaeus in Luke, Chapter 19:1-9

Jesus entered Jericho and made his way through the town. 2 There was a man there named Zacchaeus. He was the chief tax collector in the region, and he had become very rich. 3 He tried to get a look at Jesus, but he was too short to see over the crowd. 4 So he ran ahead and climbed a sycamore-fig tree beside the road, for Jesus was going to pass that way.

5 When Jesus came by, he looked up at Zacchaeus and called him by name. “Zacchaeus!” he said. “Quick, come down! I must be a guest in your home today.”

6 Zacchaeus quickly climbed down and took Jesus to his house in great excitement and joy. 7 But the people were displeased. “He has gone to be the guest of a notorious sinner,” they grumbled.

8 Meanwhile, Zacchaeus stood before the Lord and said, “I will give half my wealth to the poor, Lord, and if I have cheated people on their taxes, I will give them back four times as much!”

9 Jesus responded, “Salvation has come to this home today, for this man has shown himself to be a true son of Abraham. 10 For the Son of Man came to seek and save those who are lost.”

5. What do you think most people thought of Zacchaeus, a guy who had cheated them again and again? Were they right?
6. Did that stop Jesus from reaching out to him?
7. How did Jesus connect with him?
8. What effect did that have on Zacchaeus?
9. What is something you can do this week to reach out to someone like this?