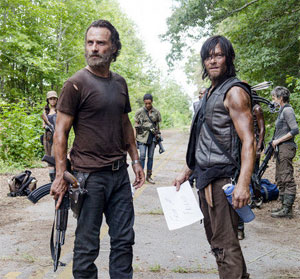 You know they’ve hit a low point when Daryl cries.

This week’s episode was about suffering. Physical suffering—they’re hungry, thirsty, and wandering like nomads. Emotional suffering—they’ve just lost two loved ones, Tyreese and Beth. Spiritual suffering—many of them are mad at God. Why would God allow this to happen? (Maybe because God’s only representative they have access to is the hypocritical priest who selfishly locked his flock outside the church to die.)

Everyone is dealing with suffering in a different way. Maggie is letting it all out. She’s crying and she seems to be distancing herself from God. If Gabriel’s all who is left of believers, who knows if she’ll be changing her mind about that anytime soon.

Sasha is expressing her grief through anger, and anger is making her stupid. She almost stabbed Michonne, she carelessly sliced Abrahams, and her outburst caused the whole group to have to expend their energy fighting zombies instead of their simple plan to knock them off the edge of the road.

Daryl was holding his grief in, at first, but he must have heeded his good friend Carol’s advice. “Let it out.” At first he expressed it through self-harm—burning himself with a cigarette. Tears followed.

How is it that we should deal with suffering?

Daryl is probably one of America’s favorite characters: tough, rugged, self sufficient, and loyal. So if Daryl hurts himself when the suffering gets to great… it can’t be too bad, right?

The show portrays some realistic feelings. Many of us can relate to intense hurt and suffering. Many of us have probably felt like hurting ourselves or swinging in a wild rage like Sasha.

Is this all there is?

Is there any hope when we suffer?

Last year I met a teenage girl who endured a severe breakup from her boyfriend. The two had been dating over a year and when he broke up with her, he tore her heart in half. She said that first week was one of the most intense pains she had ever experienced in her life, probably the most difficult burden she ever had to overcome.

Interesting enough, she now looks back at that experience as the most pivotal, life-changing moment in her 19 years. She drew closer to God, got plugged into serving at her church and attending a Bible study… all things she had put on the back burner during this relationship.

If you asked her week-one if the breakup was a good thing, she probably would have thought you insane. But now she sees it as one of the best experiences in her life.

3 We can rejoice, too, when we run into problems and trials, for we know that they help us develop endurance. 4 And endurance develops strength of character, and character strengthens our confident hope of salvation. 5 And this hope will not lead to disappointment. For we know how dearly God loves us, because he has given us the Holy Spirit to fill our hearts with his love. (Romans 5:3-5, NLT)

SEASON 5, EPISODE 10 DISCUSSION QUESTIONS:
1. As you watch the way the different characters dealt with suffering, which of them do you most identify with?
2. Do you think any of these are a healthy way to deal with pain? Explain.
3. In the verses above, what does the Apostle Paul say problems and trials help us develop?
4. How do problems and pain develop endurance and strength of character?
5. Can you give an example of when pain and suffering actually developed your strength of character?
6. Paul said we have a confident hope of salvation. What does that look like in your life?
7. What do you think is a healthy way to deal with pain and suffering?
8. How could you encourage a friend during a time of suffering?

Paul experienced a lot of suffering in his life, so he wrote about it frequently. In most of his writings, he reminds us to remember this temporary time is truly temporary, and nothing can take away our eternity with our loving God.

This passage from his second letter to the people of Corinth sums it up well:

16 That is why we never give up. Though our bodies are dying, our spirits are being renewed every day. 17 For our present troubles are small and won’t last very long. Yet they produce for us a glory that vastly outweighs them and will last forever! 18 So we don’t look at the troubles we can see now; rather, we fix our gaze on things that cannot be seen. For the things we see now will soon be gone, but the things we cannot see will last forever. (2 Corinthians 4:16-18)

How can you focus on things “unseen” this week?