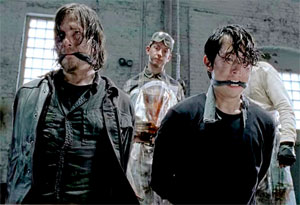 Wow! If the Season 5 Premiere were someone’s first taste of The Walking Dead, they would either love it or hate it. There is no middle ground.

This episode is sure to polarize. On one hand, it’s probably one of the most violent episodes to date, with an opening scene so chilling, a record-breaking 17 million people squirmed in couches around the world. This dark glimpse into the bowels of human depravity (the smack and slash “trough” scene) probably caused many to bail out. It’s difficult to fathom people who have become so cold and sociopathic.

On the other hand, this episode delivered what many fans have been longing for, our favorite characters uniting again… and good overcoming evil. That’s what’s so great about this show. The show wrestles with morality every week.

The battle between good and evil is a reoccurring theme in The Walking Dead, and never in the way that outsiders might speculate. It’s not the “dead” who cast a dark shadow on humans each week… it’s other humans.

The old adage seems correct: humans are like teabags. If you ever want to see what’s inside of them, just put them in hot water. When the only law in place is survival of the fittest, human beings tend to become quite ugly. Terminus proved to be a hostel for some of the ugliest. Yes, they had been shaped by some incredibly heinous persecution, but does that justify adapting a warped moral code like, “you’re the butcher… or you’re the cattle”?

Were Rick and his friends butchers?

Or is the situation a little more complicated than this?

One of the defining scenes that unpacked this struggle was when Tyreese and Martin discussed life and morality when things go bad. The scene starts at about 17:00 (including commercials), as Tyreese is tucking Judith into her little bed in the cooler:

Martin: She got a name?

Martin: Hey! She got a name?

Martin: She your daughter or something?

Martin: Huh. (He sighs and ponders for a moment.) I don’t have any friends. I mean, I know people. They’re just a**holes I stay alive with.

The other one your friend? The woman?

Tyresse thinks about his question, but doesn’t answer.

Martin: I used to have em. I used to watch football on Sundays. I went to church. (Chuckles) I know I did. But I can’t picture it anymore. It’s funny how you don’t even notice the time go by. Horrible sh*t just stacks up day after day. You get used to it.

Tyreese: I haven’t gotten used to it.

Martin: Of course you haven’t. You’re the kind of guy who saves babies. It’s kind of like saving an anchor when you’re stuck without a boat in the middle of the ocean.

You’ve been behind some kind of walls, right? You’re still around but you haven’t had to get your hands dirty. I can tell. See, you’re a good guy.

Tyreese: You have no idea about the things I’ve done.

2. Martin declared that when things grew worse day after day, “you get used to it.” Tyreese, however, hadn’t gotten used to it. Who is right?

4. Was Martin right when he suggested; saving babies is “kind of like saving an anchor when you’re stuck without a boat in the middle of the ocean”? Explain.

5. Do the “good guys” die in a chaotic world like this? Why or why not?

6. Why had the Terminus people transformed into monsters while Rick and his friends morphed into “good guys”?

Read the following passage from scripture and notice the two types of lifestyles it contrasts:

17 With the Lord’s authority I say this: Live no longer as the Gentiles do, for they are hopelessly confused. 18 Their minds are full of darkness; they wander far from the life God gives because they have closed their minds and hardened their hearts against him. 19 They have no sense of shame. They live for lustful pleasure and eagerly practice every kind of impurity.

20 But that isn’t what you learned about Christ. 21 Since you have heard about Jesus and have learned the truth that comes from him, 22 throw off your old sinful nature and your former way of life, which is corrupted by lust and deception. 23 Instead, let the Spirit renew your thoughts and attitudes. 24 Put on your new nature, created to be like God—truly righteous and holy. (Ephesians 4:17-24)

You might notice that this passage contrasts two different ways of living, those who didn’t know Christ (the Gentiles), and those who learned the truth about Christ.

7. How does the author describe the group of people who don’t know Christ? What might these actions look like today?

8. The author addresses those of us who have learned the truth about Christ and recommends we get rid of our “old sinful nature and your former way of life, which is corrupted by lust and deception.” What could be some of the “old” in your life?

9. The author tells us to put on our new nature, truly righteous and holy. What could that look like in your life?

10. In between the old and the new, this passage tells us the secret to this transformation in verse 23. What do we need to let God’s spirit do in us?

11. What does allowing the Spirit to renew your thoughts and attitudes look like?

12. How can we allow God to slowly change our thoughts and attitudes this week?

I’ve seen people transform both ways. I’ve seen them fill their minds with darkness and wander far from the life God gave them. I’ve also seen people who realized the emptiness of that life and allow God to slowly change the way they think.

Which would you rather be?

What does that look like in your life today? Tomorrow? Next week?