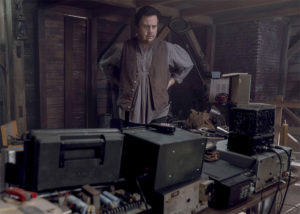 This is something I always wonder about on The Walking Dead. In the ten seasons of the show, betrayal is something that seems to just happen every other week. In the early seasons of the show you would sometimes be surprised when someone would betray our favorite characters.  But after a while, it became so common that you would get frustrated when anyone trusted a new character.  It almost seemed like more than half of the people they met, would ultimately end up betraying and sometimes even killing people.

I have met people who have been betrayed many times, and it takes a serious toll on their ability to trust anyone.  But I have never met anyone who has experienced as much betrayal as the characters on this show. I sometimes wondered if it would be interesting to introduce a psychiatrist on the show.  People would be in therapy for years.

But in the world of The Walking Dead, this is just a reality of life.  When you meet someone new, you can’t be sure that they aren’t planning on killing you and taking everything that you have. That is just the way that these people have to live.

But Eugene really wants to get beyond the surface with this new found long-distance relationship, so he proposes that they tell each other more about themselves.

Eugene: This deet exchange on our formatives has been very enjoyable, and at the risk of said humiliation, I wonder if we could dip our toes into some real talk.

Voice on Radio: It’s been great, honestly. But I don’t really know you. You might be a threat. Maybe it’s better if we let this be, you know, what it is.

Eugene: (Thinks for a while) What if I were to share specifics?

Voice on Radio: Who’s to say I’m not a threat to you? People are dangerous.

Eugene: I’m well aware. And yet, I have a twinge in my belly that says you lean toward the “good” column of the alignment chart. I do know you. My given name is Eugene Hermann Porter, and I propose we continue these convos on the reg, with the hopes of buildin’ more. Should that meet with your approval and/or interest, of course.

Eugene: So we’re in agreement, then.

Voice on Radio: We are. [CHUCKLES.] But But let’s just keep this between us for now. I wanna trust you, but if I hear anyone else, I’ll know I can’t. And you’ll never hear from me again.

Eugene: [CHUCKLES.] Okay, just you and me. Copy that. Over.

It is very possible that Eugene is getting conned. For all we know that caller could be a whisperer, or maybe even a member of a new hostile group that we haven’t met yet. Or perhaps this person could become the next love of Eugene’s life.  The point is, that we have no idea whether he can trust her or not.

And if you think about it, even in a world without walkers, trust is something that is hard to come by.  Most of us guard ourselves carefully and wait to see if the new people in our lives are trustworthy.  And let’s face it, we even do it with people who we have known for a long time.  Since we can’t read people’s minds, we tend to read their actions.  And in most cases, watching people’s actions is the way that we determine who we can trust. But even that doesn’t always work.

Fortunately for me, I haven’t been betrayed in a very long time. I also have people around me who have been trustworthy for so many years that I almost completely trust them. But I realize that this isn’t the case for many people. And I can remember times in my life when trust was very hard to come by.

But as a Christian, there has always been good news for me in the midst of being unfairly attacked and slandered.  And this has been a truth for people from the beginning of time. According to the bible, when we are attacked and betrayed we can take solace in the fact that we have a God whom we can trust.  Just take a look at the first four verses of Psalm 56, a Psalm of David.

1 O God, have mercy on me,
for people are hounding me.
My foes attack me all day long.

2 I am constantly hounded by those who slander me,
and many are boldly attacking me.

3 But when I am afraid,
I will put my trust in you.

4 I praise God for what he has promised.
I trust in God, so why should I be afraid?
What can mere mortals do to me?

David was someone who knew what it was to be attacked and betrayed. He also did a portion of his own attacking a betraying (not unlike Eugene). But in this Psalm David is able to point out the great news in the midst of great turmoil. He is pointing out that we can always trust God.  It has always been that way, and it will always be that way because God is completely trustworthy – 100% of the time.

Notice how David puts it in verse 4.  He says, “I trust in God, so why should I be afraid?”  What is he saying that trust in God does for him?  He is saying that it takes away fear. He doesn’t have to be afraid anymore because God keeps all of His promises.

Like David, we can trust in the promises of God and it means that we don’t have to fear when we are being attacked from all sides.  You see, our God is the God of the universe and if He is on our side, who do we have to fear?  People can and will fail us, but God never will. So if we just learn to trust Him, we will see that there is no situation that we can’t handle, because we know that God will never break any of His promises to us.

1) Do you think that Alpha should trust Negan? Why or why not?

2) If Negan betrays the whisperers and tries to come back to the group, should he be trusted? Why or why not?

3) Daryl didn’t seem to trust Carol out in the woods by herself.  Why do you think that was?

4) Do you think that Carol should be trusted near the Whisperers? Why or why not?

5) Do you think that Eugene wants to trust the voice on the radio a little prematurely? Why or why not?

6) If you think that Eugene is trusting the voice too much, why do you think he is?  If not, why not?

7) Has Eugene always been trustworthy himself?  Why or why not?

9) Do you feel like you need to put more trust in God right now? Why or why not?