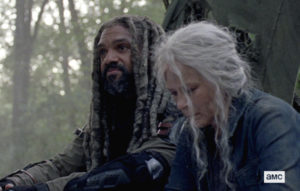 But probably the most telling clue that things weren’t well, was what happened between Ezekiel and Carol when they briefly got back together.  Afterwards, they talked in a way that they hadn’t for a very long time.

Carol: No I haven’t. I left it on the dresser, in the kingdom and then it burned down.

Ezekiel: Well if it makes you feel any better, I left my pride sitting up there too.

Ezekiel: Would this have happened if this was any other night?

Carol: What do you mean?

Ezekiel: If we didn’t think we were gonna die tonight.

That was the first time in a while that we saw Carol make a joke, and it was pretty clear that this might be the very last time we see the two of them together.  Even if Ezekiel doesn’t survive the war, he has cancer and Carol knows it. So tonight, they are just two lonely people trying to connect before one or both of them are no longer alive.

As much of the New Testament was written, there was widespread persecution of Christians happening throughout the known world.  This was something that Paul addressed many times in his letters to the early church as he tried to help people deal with their fear of the very realistic possibility of their martyrdom. One such church where this happened was in the Greek city of Corinth.

Paul dealt with all kinds of problems that this particular church was having, but in the middle of the letter he takes the time to say something very encouraging about the persecution happening in their own community.  Paul writes,

1 For we know that if the earthly tent we live in is destroyed, we have a building from God, an eternal house in heaven, not built by human hands. 1 Corinthians 5:1(NIV)

Paul points out that, when they kill the body, they still have not destroyed the soul. For most people who are dealing with the very real possibility of not surviving the day, there is no more encouraging news!  He is saying that the most final thing that the enemies of the people of God can do is kill the body, and even that is not final. The good news for followers of Jesus is that death has lost it’s sting! Because of what Jesus did for us on the cross, death is not a final victory for those who oppose God.

While we know that this life is temporary, this perspective changes how we look at every situation. It doesn’t mean that we won’t experience death, it just means that death has lost its finality for Christians.  And there is no better news for us than that!

1) Why do you think that Gamma needed to see her nephew immediately?  Do you think that she was aware that something was going to happen to Hilltop soon?  Why or why not?

2) Carol and Lydia are both having a tough time with relationships with the people of Hilltop.  Regardless of whether they deserve it or not, do you think that it is changing what they think of each other?  Why or why not?

3) Why do you think that so many characters want to make things right with each other before they go to war?

5) In Paul’s letter, he describes our earthly body as a tent and our eternal body as a house or building.  Why do you think that is?

6) Do you think that Paul is implying that one body (the building) is better than the other (the tent)? Why or why not? (remember that he was a tent maker as a profession)

7) Does knowing that there is life after death change how you look at death?  How?

8) What can you do to help remember this whenever you feel anxious about your own mortality?