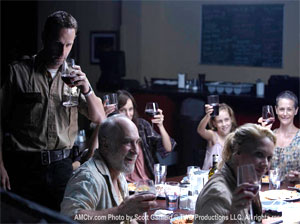 The Walking Dead Season One ended up with a bang (literally), as the survivors find temporary refuge in none other than the CDC. I was bummed that they didn’t make a two part episode out of this one, as the plot lined seemed a bit rushed, and it would have been cool to spend more time with the Dr. Jenner and pick his brain for more info.

But alas, the CDC runs out of gas, and of course a facility like that is fitted with a self-destruct protocol to keep diseases from getting out. I was watching the episode thinking, “hey- why didn’t they load up made a few more gallons of diesel fuel instead of, you know… booze?”

This episode exhibits great evidence for an old Latin phrase: “in vino veritas”- which translated means:

In wine, there is truth.

There is much truth that comes out when the characters pretty much guzzle down the alcoholic selections that the Dr. ordered, and some of it was pretty disturbing. For example, because of the flashback at the beginning, we see that Shane maybe isn’t such a home wrecker after all…that is until he attempts to assault Lori in a drunken state.

And perhaps even more telling is the scene with Rick where the truth about his worldview comes out:

1. Do you think the effects of drinking were accurately portrayed in this episode? Why or why not?
2. Do you agree with the old phrase that says “in wine there is truth”? How did that theme come out in this episode?
3. Do you think that deep down Rick really feels hopeless? Why or why not?
4. How does alcohol tend to amplify negative emotions and encourage people to destructive behavior?
5. Why did it take the effects of drinking to bring out Rick’s true feelings?

Who has anguish? Who has sorrow?
Who is always fighting? Who is always complaining?
Who has unnecessary bruises? Who has bloodshot eyes?
It is the one who spends long hours in the taverns,
trying out new drinks.
Don’t gaze at the wine, seeing how red it is,
how it sparkles in the cup, how smoothly it goes down.
For in the end it bites like a poisonous snake;
it stings like a viper. (Proverbs 23:29-32)

6. How did alcohol contribute to anguish, sorrow, and unnecessary wounds in this episode?
7. Is the Bible contradictory when it condemns “spending long hours in taverns” but also reveals that Jesus drank wine? Why or why not?
8. How might things gone differently in this episode if there weren’t any booze at the CDC?
9. Does alcohol use always end up ‘biting us’ like a poisonous snake? Why or why not?

Wrap up
In this episode, several people used alcohol to the point that some of their worst behavior surfaced- even to the point of hurting others. The Bible is very explicit in terms of the dangers of alcohol, which is why we all need to define our convictions about this area before we are in a tempting situation.