Season 1, Episode 3—Tell it to the Frogs 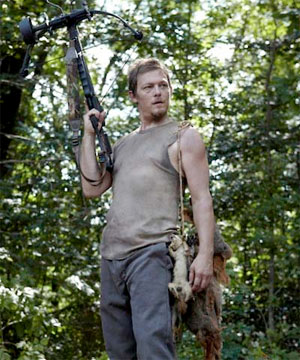 How much are you willing to sacrifice… for your enemies?

This week, we see exactly how far Rick Grimes was willing to go for someone who didn’t deserve it.

But really… do any of us deserve it?

The episode started with a much more sentimental moment… no, not the much needed haircut that Lori gave Carl, rather the much anticipated reunion between Rick and his family. That moment was the most touching scenes in the series so far- even the music obeyed the sentimental vibes!  Not what we expected from a zombie apocalypse show, right?

We also were introduced to Merle’s brother Daryl (you can almost hear the swoons across the country), and we got confirmation that the only way to take out a walker is by destroying the brain, staying true to the zombie genre.

Perhaps the biggest shock of all is that Daryl makes an “On Golden Pond” reference.

But there is still the underlying negative current of the infidelity incident that will one day show up in the survivor camp like a walker ready to devour.  In the meantime, Rick is plagued with a sense of guilt about leaving Merle to die either at the hands of the zombies or exposure to the elements.

At just past the 28 minute mark, there is a scene where Rick has announced that he is going back for Merle, and Shane questions him about the decision:

Shane: So that’s it, huh?  You’re just gonna walk off?  Just to hell with everybody else?

Rick: I’m not saying to hell with anybody—not you, Shane, Lori least of all.

Shane: Tell her that.

Shane: Well, look, I don’t—okay Rick?  So could you just throw me a bone here man? Could you just tell me why?  Why would you risk your life for a douchebag like Merle Dixon…the guy wouldn’t give you a glass of water if you were dying of thirst?

Rick: What he would or wouldn’t do doesn’t interest me- I can’t let a man die of thirst- thirst and exposure.  We left him like an animal caught in a trap-that’s no way for anything to die- let alone a human being.

To be honest with you, in many ways I relate more to Shane than I do with Rick in that scene.  I’d like to say that I would do the same as Rick, but I also can see why it almost seems fair to let Merle face the consequences of his behavior.

1. If you were Rick, would you jump at the chance to go back and attempt to rescue Merle? Why or why not?

2. If you were Lori, what feelings would you have about Rick’s decision?

3. If you were Carl, what would you say to your dad about going away right after he just got back?

4. Is every human being deserving of God’s undeserved grace?  Why or why not?

“If a man has a hundred sheep and one of them wanders away, what will he do? Won’t he leave the ninety-nine others on the hills and go out to search for the one that is lost?  And if he finds it, I tell you the truth, he will rejoice over it more than over the ninety-nine that didn’t wander away! In the same way, it is not my heavenly Father’s will that even one of these little ones should perish. (Matthew 18:12-14)

5. What parallels are there between the scene in The Walking Dead and this passage?

9. How would our lives be different if we had Rick’s attitude towards people who are lost and in danger of spiritual death?

Final Thoughts:
In The Walking Dead, Rick sees all human beings as equally valuable, and he has a strong conviction about people dying with dignity.  This week, think about who the ‘lost sheep’ are in your life. How much risk you would be willing to take to show love to or share the good news with someone who would call him/herself your enemy?