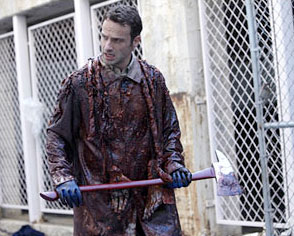 Things are definitely heating up in and around Atlanta in the second episode of The Walking Dead, titled ‘Guts’- and I’m not just talking about the sweltering temperatures.

The opening scene obviously gives us a look into a potential coming storm as Lori (Rick’s wife) abandons her marriage locket in the throes of a passionate affair with Shane.  She assumes Rick is dead, but people should think twice before sleeping with a woman whose husband carries a gun.

It isn’t long into this episode before we begin to see Rick’s leadership ability emerge. The group that Rick teams up with is bullied by a racist intimidator named Merle.  Merle makes offensive racial remarks towards an African American named T-Dog, then after giving T-Dog a beat down, decides to nominate himself as the new leader. (Just the kind of guy you’d want to follow, eh?)

The rest of the group has obviously been intimidated by Merle, and they are willing to submit to his leadership for the moment. What Merle didn’t expect, though, was the ‘guts’ that Rick had at the moment in the face of evil.

At the 30 minute mark, there is a scene where Rick subdues Merle and changes the entire scenario:

Rick: Things are different now…We survive this by pulling together- not apart

Rick: I can see you make a habit of missing the point

Rick: Ought to be polite with a man with a gun (cocks gun)- only common sense

Merle: You wouldn’t- you’re a cop

Rick: All I am anymore is a man looking for his wife and son…anybody that gets in the way of that is gonna lose

When I watched that scene, I thought about how many opportunities we get literally each day to stand up to evil and change the culture of our family and friends.  Most people would rather just go with the flow, but sometimes it is critical that we have the ‘guts’ to confront the bad and promote the good for ourselves and our community.

1. If you were a member of the group that was being bullied by Merle, would you confront him?  Why or why not?
2. Why didn’t the other people in the group use their numbers to overpower Merle when they had the chance?
3. What gave Rick the courage, or “guts,” to subdue Merle?
4. Have you ever been in a similar situation (minus the zombies of course)?

“The Spirit of the Lord is on me,
because he has anointed me
to proclaim good news to the poor.
He has sent me to proclaim freedom for the prisoners
and recovery of sight for the blind,
to set the oppressed free… (Luke 4:18-19)

These words obviously have deep meaning as Jesus said them, because he was announcing his messianic role. But he was also revealing some of the ministry he would be modeling, sharing the good news and caring for others.

5. How do these words that Jesus is quoting apply to how we should live out our faith?
6. What circumstances would require us to have the ‘guts’ to confront evil and change the culture around us?
7. How can we balance being ‘peacemakers’ and setting the oppressed free through decisive action?
8. How would your walk with Christ be different if your worldview was centered around this: “all I am is a person trying to follow Jesus…any evil that gets in the way is gonna lose…”?
9. What is one way you can have the guts to live out your faith like Jesus did this week?