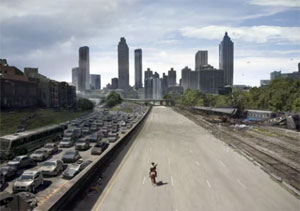 It seemed like a normal Halloween night in 2010. People dressed their kids in costumes and set a bowl of candy by the front door. But for comic book fans, October 31, 2010 was a huge night. This was the night Shawshank Redemption director Frank Darabont was going to begin telling the story of one of their favorite comics, The Walking Dead.

Unless you’ve been out of the country or in a coma the past few years, you’ve most likely heard the buzz. Based on a comic book series of the same name, The Walking Dead, this post-apocalyptic series is now in its 4th season and going strong with a solid weekly viewership of over 12 million zombie fans.

The series stars Andrew Lincoln as sheriff’s deputy Rick Grimes, who wakes up from a coma to find a world dominated by flesh-eating undead known as ‘walkers’. Grimes sets out to find his family and encounters many other survivors along the way.

The plot is primarily focused on the surviving group’s dynamic interaction in the face of imminent and grave danger, and the challenges of maintaining their humanity in the face of a horrific and very inhuman culture.

And that’s where the show departs from the typical Romero film.

This show is about morality.

“What would you do if you were in that situation?”

The series has probably provoked more water cooler discussions than any to date… yes… even Lost (which, in contrast, was pretty lame by Season 4… ya gotta admit).

Episode one, called Days Gone By, establishes the plotline and several of the main characters.  Essentially you could call it ‘Meet the Zombies”, but it also gives you great insight into our protagonist Grimes.

In one particular scene, there is an interesting view into what it might be like to wake up to the zombie apocalypse:

Morgan Jones: Hey mister, you even know what’s going on?

Rick Grimes: I woke up today… in the hospital, came home and that’s all I know.

Morgan Jones: But you know about the dead people, right?

Rick Grimes: Yeah, I saw a lot of that – out on the loading dock, piled in trucks.

Morgan Jones: No, not the ones they put down. The ones they didn’t – the walkers, like the one I shot today. C’ause he’d have ripped into you, tried to eat you, taken some flesh at least. Well, I guess if this is the first you’re hearing it, I know how it must sound… But listen, one thing I do know – don’t you get bit. I saw your bandage and that’s what we were afraid of. Bites kill you. The fever burns you out. But then after a while… you come back.

While all of us have not woken up to that kind of nightmarish scenario, we all really should be aware that in the absence of flesh eating zombies, we face spirit-destroying demons each and every moment.

1. What would your initial thoughts be if you woke up tomorrow and the Zombie Apocalypse had begun?
2. Would you immediately set out to find your family?  Why or why not?
3. Would you have any moral reservations about ‘killing’ zombies?  Why or why not?
4. Who are the enemy’s you face day to day?

For we are not fighting against flesh-and-blood enemies, but against evil rulers and authorities of the unseen world, against mighty powers in this dark world, and against evil spirits in the heavenly places. (Ephesians 6:12, NLT)

5. In what ways are the enemies described in the verse above like Zombies?
6. What are the ‘weapons’ we need to use in our war against the ‘evil rulers and authorities of the unseen world’?
7. How does our struggle against them strengthen our walk with God?
8. What is something you can resolve to do this week to prepare for this spiritual battle? (See Ephesians 6:18)