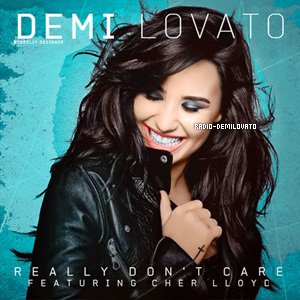 Main Point: Even though we may think a romantic relationship is going to last forever, if it ends, we are still obligated by God to maintain an attitude and lifestyle of love towards the other person.

Unfortunately, her career went into a tailspin when she checked into rehab in late 2010. Demi’s high profile struggle was amply covered in the media, but the young singer tried to use her inner battles as a tool to help others. She even rebounded with a strong single entitled Skyscraper (that we turned into a MUSIC DISCUSSION about building a solid life). She’s also talked about her struggles in documentaries (which we also used as a springboard in this MUSIC DISCUSSION about resisting temptation).

Now, Demi is back with velocity. Really Don’t Care is definitely a different kind of song (and video) from this usually wholesome artist. The song is about getting over an ex, but Lovato doesn’t sacrifice any sleep – or courtesy – in the process. The music video is largely shot on scene at a gay pride rally in West Hollywood, and it opens with Lovato making statements about “Jesus loving everybody.” It also has plenty of graphic moments: shots focusing on butts and genitalia, same-sex couples kissing, and guys dressed as girls. The video, which is being used as a statement of sexual equality, employs plenty of cameos; Perez Hilton, Travis Barker, Cher Lloyd, and Wilmer Valerrama are just a few of those seen in the music video with Lovato.

NOTE:
We highly recommend that you review the video for yourself before deciding if you want to show it to your group or not. If not, you can easily still do this discussion with your group by just passing out copies of the lyrics and going from there.

Introducing the Song:
Most of us are familiar with Demi Lovato; in fact, a lot of you guys have grown up watching her on the Disney Channel and listening to her music. She’s kinda had a tough few years – a rise to fame followed by a tailspin into rehab followed by a rebirth of her career. There’s no denying that Lovato is a talented artist; the girl can flat out sing! In her latest single Really Don’t Care, Lovato is joined by Cher Lloyd and the two of them sing about the best way to get over an ex: they really don’t care. Take a listen to the words of the song as we watch the music video and see what you think about her strategy for moving on.

The Music Video:
The video can be found at the following link: https://www.youtube.com/watch?v=OJGUbwVMBeA

[Cher Lloyd]
Yeah, listen up
Hey, hey, never look back,
Dumb struck boy, ego intact
Look boy, why you so mad
Second guessin’, but should’ve hit that
Hey Demi, you picked the wrong lover
Should’ve picked that one, he’s cuter than the other
I just wanna laugh, cause you’re tryna be a hipster
Kick it to the curb, take a Polaroid picture


Put to death, therefore, whatever belongs to your earthly nature: sexual immorality, impurity, lust, evil desires and greed, which is idolatry. 6 Because of these, the wrath of God is coming. 7 You used to walk in these ways, in the life you once lived. 8 But now you must rid yourselves of all such things as these: anger, rage, malice, slander, and filthy language from your lips. 9 Do not lie to each other, since you have taken off your old self with its practices 10 and have put on the new self, which is being renewed in knowledge in the image of its Creator. 11 Here there is no Greek or Jew, circumcised or uncircumcised, barbarian, Scythian, slave or free, but Christ is all, and is in all. 12 Therefore, as God’s chosen people, holy and dearly loved, clothe yourselves with compassion, kindness, humility, gentleness and patience. 13 Bear with each other and forgive whatever grievances you may have against one another. Forgive as the Lord forgave you. 14 And over all these virtues put on love, which binds them all together in perfect unity.

Wrap Up:
If I’ve learned one thing in this discussion, it’s this: Demi Lovato can be tough in the aftermath of a breakup. In her song Really Don’t Care, she prescribes pulling out all the stops. She doesn’t care that he’s in pain, or if she talks meanly about him…and she’s even willing to give him the finger after it’s all over.

She truly lives up to her song’s title: she really doesn’t care.

Because God wants the best for us, He gives us plenty of ideas for handling broken promises and broken hearts in His Word. He tells us to continue to carry ourselves in love toward the other person, even if they treated us in a very unloving manner. He tells us to be kind and compassionate, as well.

I know that sounds difficult…and maybe even a little crazy. But where does it get you if you choose to run the other person down, be mean to them, or treat them just as hatefully as they treated you? Doesn’t it make you like them instead of like God?

Regardless of what Demi says, you should still care because God still cares. Let’s pray now and ask God to help us do what He commands in His Word.