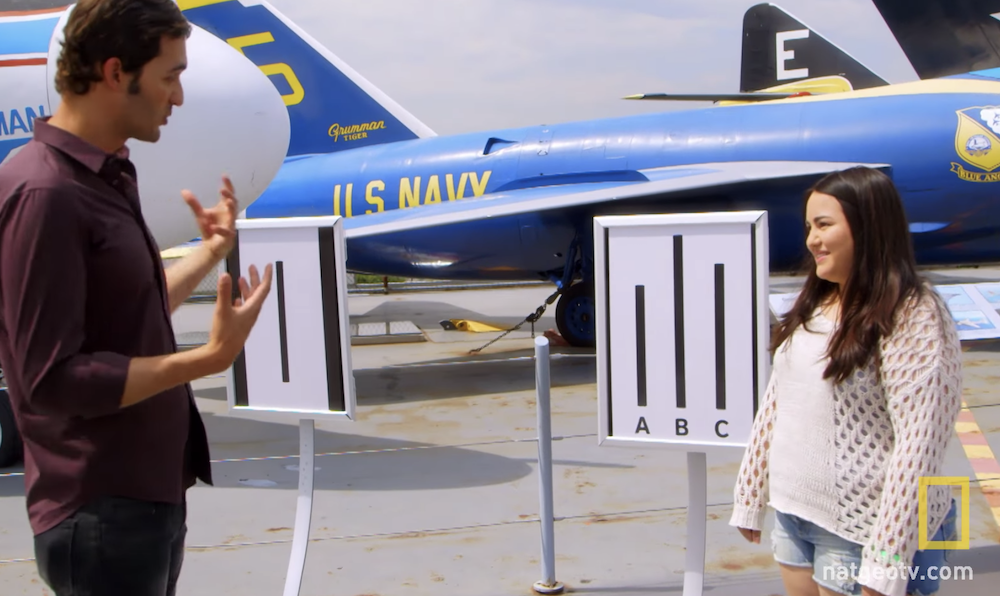 Main Point:
Blindly going along with the crowd is rarely a good idea. Instead, we should take a stand on what we know to be the truth. While that may be tough to do in the moment, it is always the best course of action.

The Discussion Starter: Question the Herd
The short video clip you’ll use for this discussion comes from the Netflix show called Brain Games, Season 5, Episode 8, “Peer Pressure” (though a simple YouTube link will be provided so you can easily show the clip to your group).

In this scene, the show’s host, Jason, interrupts some sightseers to find out if they’d like to participate in a social experiment. He shows ten people two different placards with various lines drawn on them. Then he asks the participants to decide which lines are the same length. Pretty simple, right?

Well, Jason has stacked the deck against the tenth and final person to participate in each group…because the first nine people are actually conspiring together with the host. One by one, the first nine people all say the same (wrong) answer. When the tenth person is invited to give his or her answer, viewers see their confusion because, on one hand, they think the entire crowd is wrong, but on the other hand, they don’t want to be that one person who’s different or wrong.

What will they do? And more importantly, why?

The Video Clip: This clip is available online at the following link: https://www.youtube.com/watch?v=0IJCXXTMrv8

Transitional Statement:
“Have you ever ignored the truth to fit in with the group?” That’s the question the show’s host asks us in this clip. “Have you ever ignored the truth…to fit in with the group?” In other words, have you ever taken a stand with the crowd even when you knew it wasn’t right? I get it. It’s tough to take a stand when all eyes are on you, and I’m not just talking about for teenagers. Every person in this clip was an adult and they still got tripped up on this! But here’s the deal: blindly going along with the crowd is rarely a good idea. Instead, we should take a stand on what we know to be the truth. While that may be tough to do in the moment, it is always the best course of action. Let’s take a few minutes to talk about this in more detail.

Do not conform any longer to the pattern of this world, but be transformed by the renewing of your mind. Then you will be able to test and approve what God’s will is – His good, pleasing and perfect will.

Wrap Up:
In the video clip we watched, we saw a few adults give in to peer pressure when they knew all along in their guts that the crowd was wrong. But they’re not the only ones who do that. Too often, you and I do the same thing.

We know it’s wrong to gossip about a friend, but a few of the more popular kids started it, so we are tempted to go along with it….

We know it’s wrong to cheat on the test, but a friend got his hands on the answer sheet and is making copies for everyone right now….

We know it’s wrong to drink, but if some of the girls show up at the party with alcohol, we’re going to be faced with a tough call….

OK, those are just a few scenarios; we talked about others in our breakout groups. It doesn’t matter what the situation is, if we take a stand with the crowd, chances are good we’re making a bad decision. But if we take a stand on the truth, we are guaranteed to make the right decision…even if it’s not a popular one.

At the end of the day, what you have to decide is whether you want to take a stand with God or not. The verse we looked at during our discussion time tells us we can “conform” to this world or be “transformed” by God. If we conform to this world, we’ll look just like it, and everyone else in it. If we choose to be transformed by God, we’ll look like His Son Jesus, which is God’s will for our lives.

I know it’s not always easy to take a stand for truth over the crowd. In fact, it’s rarely easy to do that! But it’s always the best decision to make. The video clip talked about “questioning the herd” which was their way of saying we should ask ourselves if the crowd’s influence is good for us or not. I definitely think you should do that in every decision you make. In the end, if the crowd’s influence will lead you away from God, or your family, or your integrity…then leave them behind and take a stand on God’s truth. You’ll be glad you did.

In a moment, we’re going to close in prayer. If you’d like to talk about this more, you’re always welcome to speak with me or one of our adult leaders. We know we’re calling you to do a difficult thing, so we don’t want you to have to face that alone. We’re here to help you in any way we can.