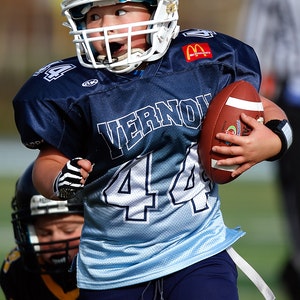 The Discussion Starter:
In Olivet, Michigan there’s a middle school boy named Keith Orr who has a learning disability. But Keith is dearly loved by the guys on his school football team. That’s why, during a game on October 5, 2013, the players hatched a plan to put Keith in the game and make him a hero.

Quarterback Parker Smith handed the ball off to running back Sheridan Hedrick who raced toward the end zone with no defenders between him and the goal line. But on the 1 yard line, he dropped to the turf…to the groans of many adults in the crowd.

Now, everything was ready.

Enter 95-pound Keith Orr. His teammates put him in the backfield, snapped the ball, handed it to him, and then built a human shield around him as they pushed him across the goal line. Touchdown!

But this touchdown didn’t just change the scoreboard. It changed lives. Let’s take a look why.

Transitional Statement:
I get why the wide receiver, Justice Miller, was a little teary-eyed during the interview with the CBS news team. Not only did his team score a touchdown, and not only did his friend Keith get to do it, but it also changed his own life. He recognized in that moment that showing kindness wasn’t just for the benefit of those around him (like Keith). He realized that when he showed kindness to others, it changed his life, too! That’s what I want us to focus on during our discussion time. Let’s see what the Bible has to say about what happens to you and me when we show kindness to others.

Some time after this, Jesus crossed to the far shore of the Sea of Galilee (that is, the Sea of Tiberias), 2 and a great crowd of people followed him because they saw the miraculous signs he had performed on the sick. 3 Then Jesus went up on a mountainside and sat down with his disciples. 4 The Jewish Passover Feast was near. 5 When Jesus looked up and saw a great crowd coming toward him, he said to Philip, “Where shall we buy bread for these people to eat?” 6 He asked this only to test him, for he already had in mind what he was going to do. 7 Philip answered him, “Eight months’ wages would not buy enough bread for each one to have a bite!” 8 Another of his disciples, Andrew, Simon Peter’s brother, spoke up, 9 “Here is a boy with five small barley loaves and two small fish, but how far will they go among so many?” 10 Jesus said, “Have the people sit down.” There was plenty of grass in that place, and the men sat down, about five thousand of them. 11 Jesus then took the loaves, gave thanks, and distributed to those who were seated as much as they wanted. He did the same with the fish. 12 When they had all had enough to eat, he said to his disciples, “Gather the pieces that are left over. Let nothing be wasted.” 13 So they gathered them and filled twelve baskets with the pieces of the five barley loaves left over by those who had eaten. 14 After the people saw the miraculous sign that Jesus did, they began to say, “Surely this is the Prophet who is to come into the world.”

Wrap Up:
It’s hard to watch the clip of those middle school football players and not get a little emotional. What they did for their buddy Keith was awesome. In fact, Keith even said their act of kindness made him feel great! And Keith probably doesn’t get many opportunities to feel that great.

I love how the boys shared that it was their idea to help Keith. No one put them up to it. It was their own doing; they did it simply because they loved him. How cool!

But the ironic thing is, though the football players did it to be kind to Keith, it was a few of them who received the biggest blessing at the end of the day. You heard one of the young man say how doing this kind deed for Keith made him move from only thinking about himself to thinking about others. In other words, “Now I get that it’s not all about me.” He was now able to see how important it was to think of others and serve them first.

That’s what happens when we show kindness to others. We see others the way God wants us to see them. We see them as people we love, who we are willing to make sacrifices for, and care for on an ongoing basis. There are so many reasons to be kind to others, but the fact that God uses our kindness to others as an opportunity to bless us is definitely a great one!

Let me say, though, we don’t show kindness to get something in return. That’s not how God works. I think He chose to bless those football players and that boy with the food because neither of them were expecting anything in return. They were just helping out someone they saw in need.

So, let me challenge you in a simple way. Be on the lookout for someone you can be kind to this very week. Yes, it’s a guarantee you can be a blessing to someone else, but you might grow as a result, too.